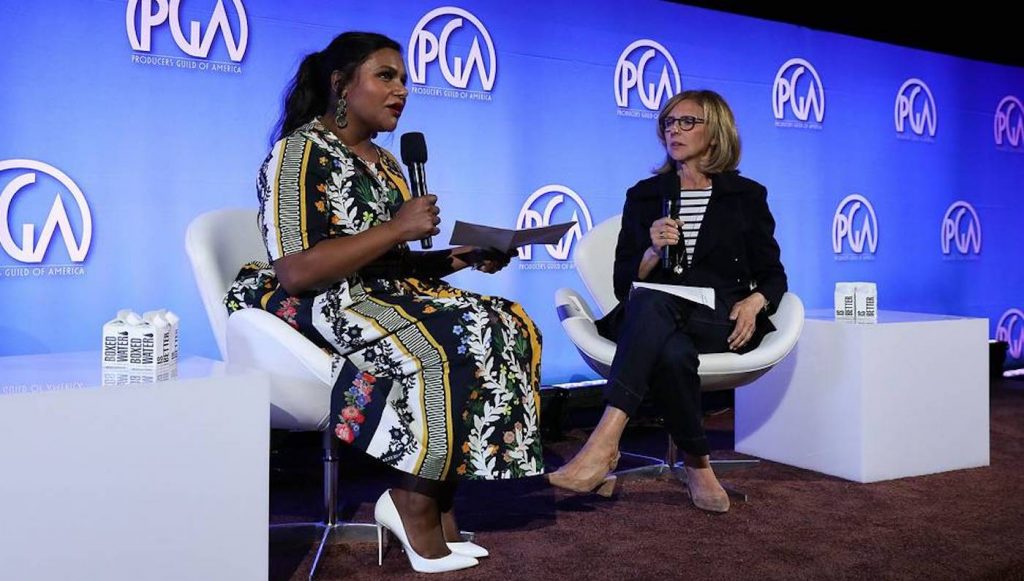 With a history just over a decade old, the “Produced By” conference in L.A. is a gathering that promises, if not exactly unfettered access, at least a chance to be in the same room with many accomplished producers, and hyphenates: producer-actors, producer-directors, etcetera.

Run by the Producers Guild, and currently hosted on the Warner Brothers backlot (an “above the line” analog to the Cine Gear show held at Paramount, the week before), admission ain’t exactly cheap. But you can sign up for pitch sessions with established pros, and even if you’re not pitching to them, hear what they have to say over a weekend of panels and “in conversation with” sessions.

Of the latter, one that sold out early was a chat between increasingly hyphenated Mindy Kaling, whose film Late Night had opened the night before, and Nancy Meyers, the writer behind Private Benjamin, who later became quite the hyphenate herself, producing and directing scripts of hers including Something’s Gotta Give and The Intern.

In the overflowing room—a screening room on the WB lot, repurposed for a conference venue—Kaling and Meyers received hearty applause (which would often continue throughout), and started by referencing an earlier chat (held downstairs in a larger theater) between Danny DeVito and Michael Douglas, noting they’d “killed it.”  In that session, DeVito and Douglas mused on their half-century of collaboration and friendship, starting with DeVito being plucked from the Broadway cast of One Flew Over the Cuckoo’s Nest to co-star in the film, with Douglas later referencing the #MeToo movement, calling it “phenomenal in bringing women into our industry more than ever before.”

There were few explicit references to #MeToo during the Kaling/Meyers talk, but a lot of reflection on opportunities afforded to women, or not. Kaling, in response to an audience question that came later, thought that most young female writers she hired “come earlier and stay later than male writers,” perhaps because their own perches seemed less secure.

Meyers said that in Hollywood in general, “you have to stand your ground” – while still being respectful. She added that this was in part due to coming to understand that the work she did “was gonna be in my obituary.”

And Kaling is making a strong start at the work she’ll someday be remembered for, post-Office: She’d written Late Night, about a popular female talk show host whose star is fading, and takes a chance with a “diversity hire”—a staff writer who, for the first time, isn’t a guy. That “hire” is played by Kaling, while the host is played by Emma Thompson—who Kaling wrote the part for. Thompson’s performance is drawing plaudits from critics, though Kaling, as the film’s producer, realized she might have made the twenty-day shoot, on her indie budget, tougher on herself than she needed.

“We could have had five more days if we’d shot in Toronto,” Kaling said, but “I felt in my gut this was a New York film.”

Similarly, Meyers recounted wanting to shoot It’s Complicated in Santa Barbara, but when she got Meryl Streep, the actress could only do the film in New York “in the dead of winter in Brooklyn.” Meyers kept pushing for art direction flourishes that still evoked “the color of Santa Barbara” when shooting.

Dead of winter considerations came up with Kaling’s upcoming project as well, a mini-series adaptation of Four Weddings and a Funeral, for Hulu, coming at the end of July. Starring Game of Thrones’ Nathalie Emmanuel, and “inspired by” the Hugh Grant/Andie MacDowell original, the version conjured by Kaling and co-creator Matt Warburton (who also helped oversee The Mindy Project), is far more ethnically diverse than the original, reflecting more of modern London.

But it was also a place where Kaling found herself facing similar “dead of winter” considerations as Meyers did earlier, on the other side of the pond. “We only had three hours of sunlight!” Perhaps, Kaling allowed, in spite of her love for the authenticity of locations, she might someday “shoot in Toronto” after all, as her producer hat becomes more weathered with experience.

But she quoted a fellow hyphenate—writer/director/producer Guillermo del Toro —who said: “the saddest journey is one that has a precise itinerary.”

Recounting the imprecision of producing Late Night, Kaling said it was “really f**king hard,” an adjective which came up throughout her dialogue with Meyers. One thing she had to learn, imprecise itinerary or otherwise, was patience, particularly in contrast to television, “where things happen in six weeks.”

The session ended not only with audience questions, but a “lightning round” between Kaling and Meyers. Among those questions were things an audience might be surprised to learn about each of them, and each replied with particular viewing habits: Kaling said she “loves murder shows (and) true crime” — and also a quiet house when she’s actually home. One title she singled out was Bosch, which she interestingly described “as a dad show.”

Meyers allowed that she’d only ever seen two superhero films: The first Spider-Man, and Wonder Woman. On a not unrelated note, Meyers later said “the business has changed in some ways not recognizable to me,” and said she’d stopped writing.

Kaling replied that she wanted Meyers to stop “not writing” and start up again. Meyers recounted that when she was starting up originally, she retyped Billy Wilder’s script for The Apartment, to learn about comedy writing in a kinesthetic kind of way. It worked.