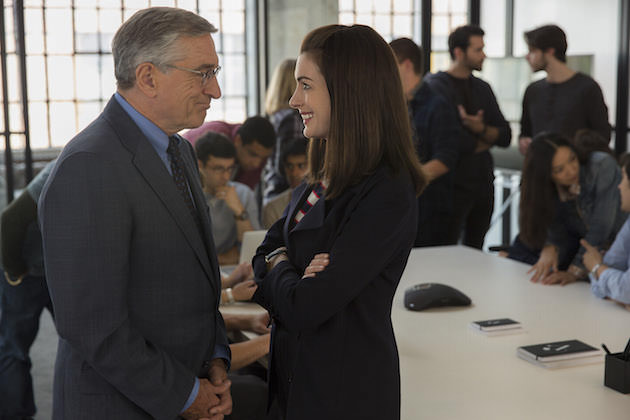 Warner Bros. Pictures just released the second official trailer for The Intern by Oscar-nominated and award-winning writer/filmmaker Nancy Meyers. Meyers, the highest-grossing female director, with a body of work which includes hits like It’s Complicated, Something’s Gotta Give, and Private Benjamin, has that rare ability to use humor to subtly guide her audiences to confront their attitudes about vital societal issues. At 65, Meyers is asking us to consider ageism, particularly as it relates to being relevant in our high-tech labor market.

This trailer gently sets up the premise. Robert De Niro plays a 70-year-old facing a major issue confronting many retirees today – what to do with their time. “In retirement, there's an ongoing relentless effort in creativity," he explains. "I tried yoga, learned to cook, bought some plants, took classes in Mandarin — believe me, I've tried everything. I just know there's a hole in my life and I need to fill it. Soon."  De Niro’s character receives an opportunity usually afforded college students and recent grads, to serve as an intern at Anne Hathaway’s character’s start-up company.

In less than two and a half minutes, Meyers bridges the generation and technology gap. She is effective in driving home her message that people of all generations can learn from each other and can provide real substantive value to each other. Can a film start a conversation that employers and potential senior employees will act upon? It's worth asking the questions.

The Intern is scheduled for release on September 25, 2015.