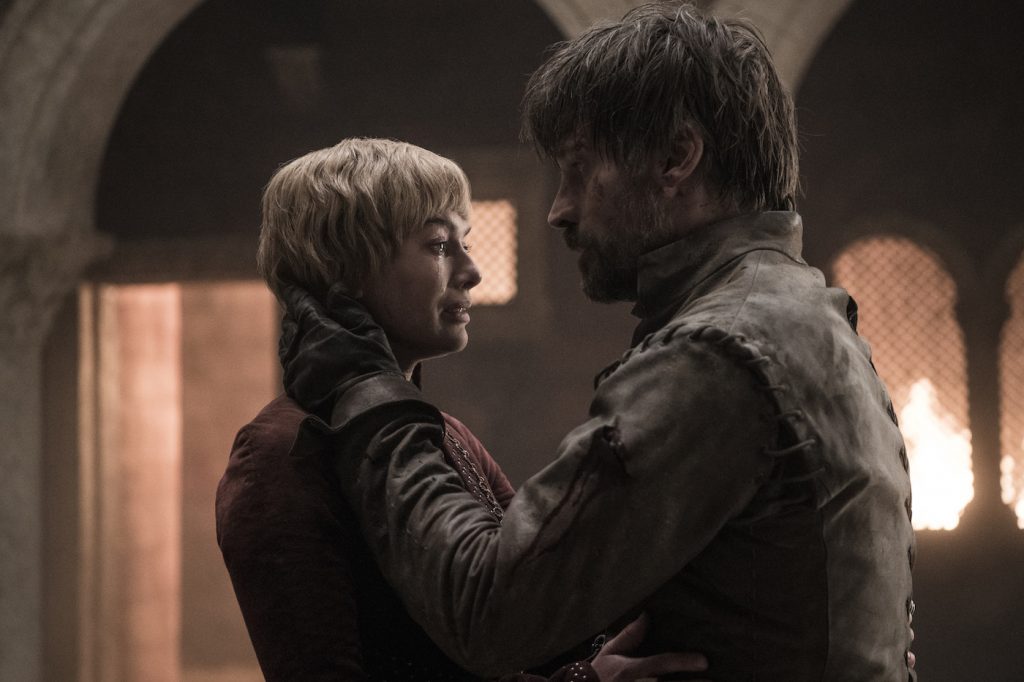 *This post reveals details from Game of Thrones’ finale and penultimate episode.

Now that Game of Thrones has come to an end (and broke some long-standing records along the way), interviews with reflective cast members are popping up left and right. One such interview was with Emilia Clarke, who spoke to both The New Yorker and Entertainment Weekly about Daenerys Targaryen’s long, difficult journey. Now Nikolaj Coster-Waldau talks with EW about Jaime Lannister’s arc, and specifically his choice to return to his one true love, even though it meant he was all but guaranteed to die.

In the penultimate episode “The Bells” Jaime Lannister returned to King’s Landing—after leaving Brienne in Winterfell—to reunite with Cersei. It was a heartbreaking choice, if not ultimately understandable, because it guaranteed Jaime’s fate. His long, intriguing character arc had taken him from a child paralyzing bully in season one through an arduous and ultimately redemptive journey towards something nearing decency. His gradual metamorphosis from villain to complicated hero included losing his hand defending Brienne and defying Cersei to fight for the living. By the time Jaime knighted Brienne and then became her lover, it almost looked like he might come out of Game of Thrones alive and happy. We should have known better.

Instead, true to the most inviolable aspect of his nature, Jaime returned to King’s Landing to be with Cersei, sealing his fate. As we all know by now, Jaime does indeed find Cersei in the crumbling map room of the Red Keep. His attempt to get her to safety is heartbreaking because we know it’s doomed. The two die in each other’s arms, confirmed in the finale “The Iron Throne” when Tyrion digs them up.

When asked by EW’s James Hibberd about Jaime and Cersei dying together, Coster-Waldau reminded viewers about a particular moment when he essentially predicted it. In episode four of season 5, Jaime and Bronn go on a mission south together. This is where Jaime responds to a question by essentially spelling out his exact fate:

“I thought it was a great ending for that couple. She was never going to surrender. And he says it to Bronn in season 4. Bronn asked, “How would you want it to end?” And Jaime says, “In the arms of the woman I love.” So this was foreshadowed and that’s what happened. There’s a least a moment that they do connect: “Just look at me, just look in my eyes, it’s just you and me…”

As for all the fan theories that Jaime Lannister would be the one to kill Cersei, Coster-Waldau never imagined it.

“Yeah. I never thought he would kill Cersei. He wouldn’t do that.”