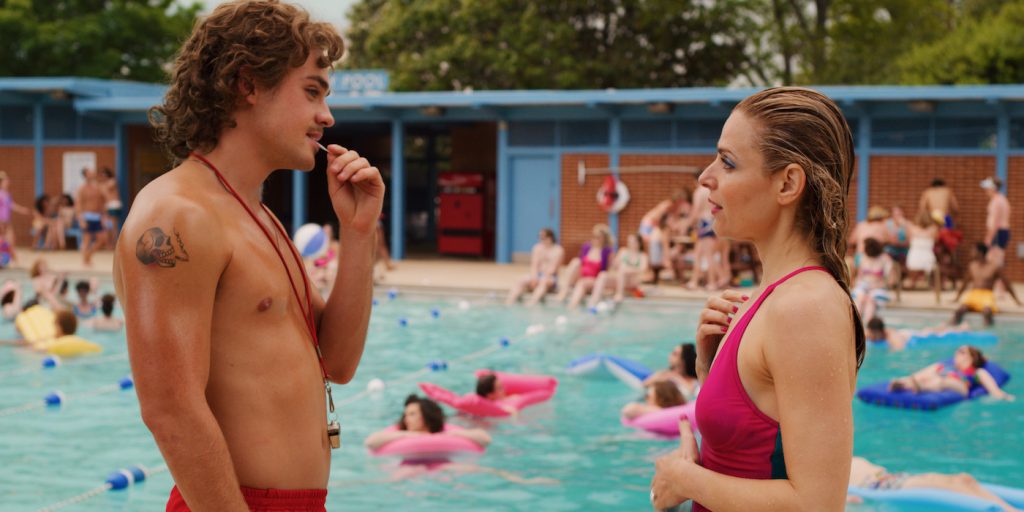 Stranger Things Season 3 Clip Takes you to the Pool

We’ve got a fresh Stranger Things season three clip, which reveals that terrifying monster from season 2—Billy Hargrove (Darce Montgomery). Last season’s ruthless bully is yet another Stranger Things character with a cool new summer job. While Steve Harrington (Joe Keery) is working at the mall, Billy’s doing the very Billy thing and spending his time at the local pool, nominally as a lifeguard (can you really imagine him saving anybody?).

The clip is—limited. It really just sets up the atmospherics of season three, which will take place over the summer and once again boast period perfect music, wardrobe, and hair. The clip has some Hawkins’ moms eyeballing Billy as he walks past to take up the lifeguard’s chair. It harkens back to that moment in season 2’s episode “The Gate,” when Billy appeared at Mike and Nancy Wheeler’s house looking for his sister Max and ended up flirting with Mrs. Wheeler.

The clip functions as a teaser without any reveals, which serves the purpose of keeping fans guessing about what’s to come. The third season features episodes titled “Suzie, Do You Copy?”, “The Mall Rats,” “The Case of the Missing Lifeguard,” “The Sauna Test,” “The Source,” “The Birthday,” “The Bite,” and “The Battle of Starcourt.”

What we’ve gleaned from previous teasers and trailers is limited but intriguing. Detective Hopper (David Harbour) and Joyce (Winona Ryder) appear to finally be testing out a potential romance. Eleven (Millie Bobby Brown) is safe to be in public now, which means she can actually live a “normal” life as a teenager. This won’t last. Max (Sadie Sink) takes Eleven to the new mall in town, which will likely be a big setting this season. Max still seems to be at the center of a love triangle between Lucas (Caleb McLaughlin) and Dustin (Gaten Matarazzo). Finally, Stranger Things most put upon character, Will (Noah Schnapp), seems to be free of the Upside Down’s grip. Yet this all sounds so promising, which means something creepy is afoot. Which is why that teaser of a horde of rats was a much more likely indicator of what’s to come.

Stranger Things 3 arrives on Netflix on July 4, 2019. Check out the clip below: