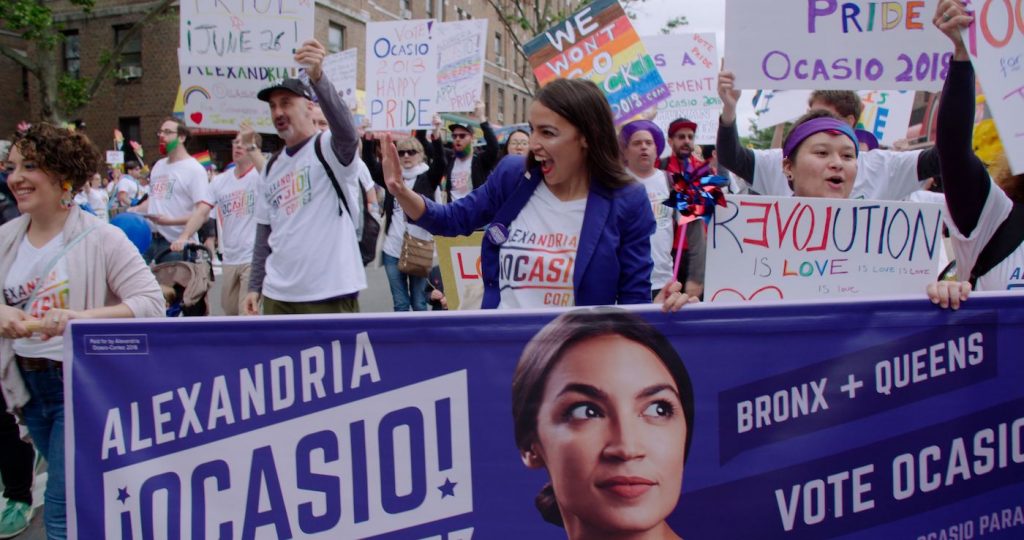 One of the big success stories of Sundance 2019 has been the documentary Knock Down the House, which was snapped up by Netflix for ten million. The festival screening got a standing ovation and a subsequent Festival Favorite Award. Streaming on Netflix starting May 1st, Knock Down the House, which is directed and co-produced by Rachel Lears, follows four female candidates as they run for office for the first time, without the use of corporate donations. The documentary features a diverse group of women, including now-famous Alexandria Ocasio-Cortez, as well as Amy Vilela, Cori Bush, and Paula Jean Swearengin. Vilela, a passionate advocate for better health care, was driven to enter politics when a preventable family tragedy reinforced her belief that the health care system in the US is broken.

We spoke to director Rachel Lears and Amy Vilela about their experiences being part of creating Knock Down the House.

How did you consciously carve out a balanced story that includes all four candidates?

Lears: Multi-character documentaries are always challenging, but we mapped out each story on its own and tried to weave them so they weren’t repetitive. The structural concept was to go from one candidate to another, exploring different aspects of the process. We didn’t necessarily need to see everyone knocking on doors. When there was repetition, we would give more space to one story that had a bit more depth in that area, but each of them brought themes to bear on the overall story that were relevant in some way.

You must really have to think on your feet, especially when the story is unfolding as you go along, and there are financial limitations.

Lears: Great stuff gets left out and other stuff gets missed during the production process, because of logistics, lack of funding, or legal reasons. At the end of the day, with a documentary, the limitations are part of what push you forward as an artist. I really feel like I get energy from those limitations, as frustrating as they can be. You really have to put together a whole, find the internal logic of the piece, and what the story wants to be.

Can you talk about how you chose your subjects?

Lears: This project started with the idea of following candidates that were being recruited by Brand New Congress and Justice Democrats. I had heard about their plan to recruit ordinary working people to run for Congress, people who wouldn’t ordinarily have a chance. They’d be running these grassroots campaigns with smaller donations, refusing corporate money. They’d be people from all different walks of life, coming together in solidarity with one another and helping each other through the process. That aspect of it really interested me, as well as the personal stories that each person would have of struggle and transformation.

The fact that it was a collective project and they’d know one another was also important to me. Also that they’d be challenging political machines and taking on entrenched power. That gave us an opportunity to explore what that power looks like, and how it works in this country. We could really look at what it entails to challenge it from the grassroots level. We knew that loss would be part of the story. We chose candidates that would be interesting to watch, no matter what happened. I wanted to spend my time with people who would be compelling to watch, win or lose.

Amy, what led to your commitment to running in the first place?

Vilela: I got into activism after my daughter passed away. I was doing rallies and was able to be part of the community that got our first congresswoman from Nevada to co-sponsor Medicare for all. People had been asking me to run before, and I’d said no, but working for universal healthcare in our state, I had left our most progressive congressman for last in asking him to co-sponsor Medicare for all. It was Mother’s Day weekend, and I told him the story of my daughter’s death and having to be pulled away from her coffin because I couldn’t comprehend how it would be the last time I’d see her. I was crying. He looked at me and told me he didn’t have to hear my story, and that he could have been out enjoying his weekend. That was the beginning of the process for me, realizing he needed to be primaried. Anybody who has their constituents dying should be concerned.

I was going to find somebody to run against him, but it became very obvious it needed to be me. It was a very difficult decision for me because I’d be giving up my career. Nobody wants a controversial executive-level accountant. I knew they’d come after me, I just didn’t know how much, or the full sacrifice. I was also struggling with “Who am I to run for office?” My background is that I was a single mom on food stamps and on Medicaid. I cuss. I’m loud and unrefined. Then I thought, “If not me, then who?”

Coming out the other side, how did the experience of the campaign and being in the film change you? Did you experience the positive reactions to the film at Sundance?

Vilela: My experience at Sundance brought tears to my eyes. It really was very special to me. My children were in the audience. Through all of this, my children sacrificed, my husband and my family sacrificed, and when I looked over, I saw my daughter crying, but she was holding her head up high. She was troubled before. She was angry. Now she is getting involved in politics and activism, and she’s getting out there and getting a voice. Seeing the impact on her, It felt really good. Going through this experience has changed me. I cannot unsee what I have seen. I cannot pretend like it doesn’t exist. I will not be complicit with it. I will not stop. This process only made me more determined. I have all the energy in the world and I won’t stop.

One of the main messages of the documentary is hope, but it also makes such a strong point about democracy being inclusive.

Lears: We set out to capture a story that would be hopeful. I decided to make this film the day after the 2016 election. I wanted to find something that challenged the narratives of division by really pointing to unexpected collaborations between people across geography, and cultural or social difference. That’s why this story spoke to me. It was always about finding common cause.

To me, it was always hopeful just being around these four candidates, and seeing how hard they were fighting, and how much they were sacrificing to forward this vision. It almost didn’t matter if they won or lost, because we could see the conversation was getting changed, and the communities were getting organized in the process. I hope the film can fight cynicism, and that it can help everyone who sees it know there is a place for their voice in the democratic process.