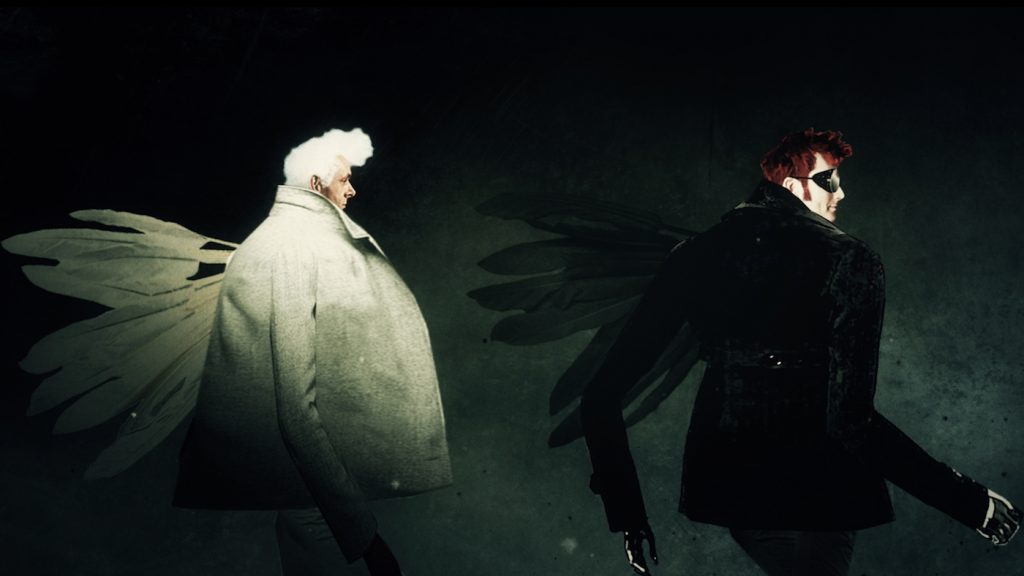 Building Thousands of Years of History in Amazon’s Good Omens

“Corners are where everyone makes decisions. This is the point where you change directions.” And corners are usually located at crossroads, to boot, the very place—especially if you’re a Mississippi bluesman—where it’s said deals with the devil can be struck.

The corner in question, however, concerns an angel, and the London bookshop that he owns—part of Michael Ralph’s production design on the upcoming Amazon/BBC adaptation of Neil Gaiman and Terry Pratchett’s Good Omens. And the “deals,” in this case, are mostly between that angel, Aziraphale, played by Frost/Nixon and Masters of Sex actor Michael Sheen, and the demon Crowley, he of the almost on-the-money name, enthusiastically essayed by Ex-Time Lord David Tennant.

The two find themselves attempting to work together to stave off Armageddon, as they come to realize that the words of General Smedley Butler, that “war is a racket,’ maybe even more applicable to the celestial kind waged between Heaven and Hell.

Even with annihilation looming, Good Omens is a series with large and small pleasures throughout, including revelations on the degree to which highway design is deliberately demonic, the voice of Frances McDormand as God, and perhaps the best, and most cheerfully punning, use of A Nightingale Sang in Berkeley Square on a soundtrack.

As for the points on that compass, Aziraphale’s office is “on the east side,” which echoes the outpost he occupied when we first meet him, six thousand years earlier, guarding Eden’s Eastern Gate.

But it should be no surprise we’re winding back the clock that much in a story that starts, literally, “in the beginning.” As cinematographer Gavin Finney notes, “this was the most varied show I’d photographed”—this from the DP behind Wolf Hall, The State, and numerous other shows. “I think there were ten different eras in the first 30 minutes.”

The segues between eras often come via high angle shots, and those vantage points—like the oculus in the bookshop—were made possible by the Technocranes and AR rigs they were using. The latter being an “add-on to Steadicam, an extra arm that allows you move the camera over objects,” as Finney describes it, giving you a vertical axis along with the horizontal one.

But gliding through so much history, apocrypha, and apocalypse also required a bit of prognostication—or at least a trustworthy phone app.

Director Douglas Mackinnon, who had worked on some of Tennant’s Dr. Who episodes, and on other series, like Sherlock and Outland, had also worked with Finney in years past but didn’t bring him on until the two ran into each other at a BAFTA event. “I was delighted to join in,” he says. “At that point, Michael and (costume designer) Claire (Anderson) were on board—and the next day, I was on a flight to Cape Town.”

Many of the film’s “Middle East” scenes were actually filmed in South Africa, and while Finney acknowledges how invaluable the location scouts were, astronomically beautiful locales proved important as well: “Douglas is very very visual (and is) the only director I know who will work out on his phone where the sun is going to be,” evidently weeks, or even months, down the road.

For the aforementioned Garden of Eden, “we worked out precisely where the sun would fall in the hole (in the garden wall) if we built the set in the right place.” The shooting schedules were then structured so the sun could backlight as anticipated—or occasionally act as a “live” portent.

“Every location had that kind of planning,” Finney says.

Along with, of course, the recurring motifs in Ralph’s production design. Another is the POV through which we look at Eden, replicated eons later in in the woods outside an English village,  where a young boy named, er, Adam, has a hide-out with his friends.

Adam might even be the Antichrist. But regardless of his own role in the world’s fate, he winds up,  at one point, consigned to his family’s backyard, where violating a warning once again leads to…an apple tree.

In between going from what Finney calls that first “perfect apple,” to the concluding one in young Adam’s hand, we cover not only the ancient Near East, but Rome, Arthurian England, the French Revolution, Victorian London, and more.

Each era, he notes, “had its own look,” though, in spite of that, the series as a whole had to be more “homogenous…so it doesn’t look messy. From Episode One to Episode Six, there’s a progression, a feel, a look that becomes colder and harder and edgier” as both the end draws nigh, and the enigmatic Adam “grows in power.”

Shooting on both an ALEXA SXT and MINI, in UHD 4k (itself the default standard for most streaming services at the moment), Finney was able to “color grade, or color correct the dailies, experimenting with different looks” as he went along, before the final online corrections. Though he’s also quick to credit his Digital Intermediate Colorist, Gareth Spensley, who also did “a lot of sky replacements to make the sky more interesting,” along with the Visual Effects (there was both an onset supervisor, and one for the series as a whole) who “helped make every frame.”

And each of those frames was packed with a kind of urgency, since, Finney says, “Douglas didn’t want the camera to ever stop moving, if possible.”

Which suits not only the frenetic moments before Armageddon but a story laden with constant subtextual connections. Even Ralph says that while he’s “only ever constantly worked on instinct— instinct and the narrative,” which served him when designing Red Dwarf, Primeval, and numerous other shows, the narrative part here was a little more demanding than usual: “You really need to read those scripts at least four times, to really get a grip on how it all connects.”

It seems to have all paid off, however: “Neil would give me a hug (saying) it felt so much like the book.”

For those wanting to make their own hidden connections between multiple viewings, Good Omens will be available to stream on Amazon Prime starting May 31st.