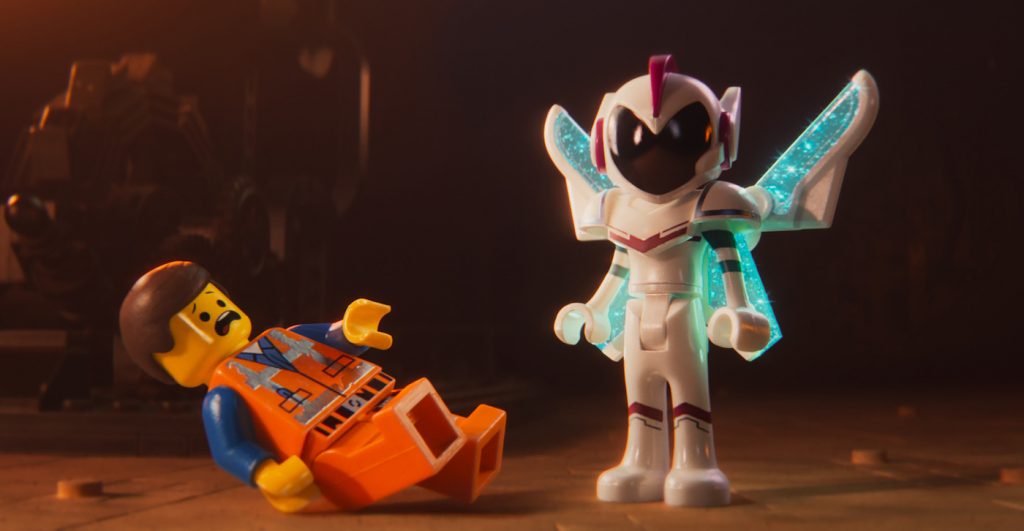 Five years ago, the first Lego Movie surprised audiences with its nimble moral-dealing in the importance of flexibility and independent thought. Also the song “Everything is Awesome.” The sequel (not counting two in between spin-offs, Lego Batman and Lego Ninjago), director Mike Mitchell’s The Second Part, is back to address sibling rivalry and the value of collaboration. Finn, the human creator of the universe in which Emmet (Chris Pratt), Wyldstyle/Lucy (Elizabeth Banks), and Unikitty (Alison Brie) live, has a new problem: his little sister. In live action scenes, Finn has to share plastic bricks, but in the toys’ world, every time Bianca crashes into her brother’s creations or makes off with his Lego characters, acts of war and kidnapping transpire. Bricksburg now looks like a set from Mad Max.

Thanks to a series of indefensible Duplo attacks from the sky, the characters soon depart their apocalyptic wasteland, not by choice. A gleaming and mysterious General Mayhem (Stephanie Beatriz) forcibly loads Lucy, Batman (Will Arnett), and others into her spaceship, transporting them to a new universe where Queen Watevra Wa’Nabi (Tiffany Haddish) proposes marriage to Batman and uses pop music to sway the others to see that her world is not the villain-filled hellscape Lucy resolutely believes it to be. Lucy comes around in time for the wedding, but not before Emmet, on a rescue mission, is himself rescued by an ersatz Emmet of the future.

The only bigger danger faced by the Lego characters is the so-called Ar-mom-geddon, which, as you can likely guess, involves Mom (Maya Rudolph) over in real life having had enough. The film is an eye-popping update on the original, with Bianca’s world adding beautiful new 2D sets, a sparkling color palette, and a compelling spaceship load of new characters. Co-Director/Animation Director Trisha Gum discussed the animation process with us, working with Tiffany Haddish, and updating the story from a new perspective.

The film was made using 3D animation but looks like stop motion. How did you make that work?

I come from a stop motion background. I was on Lego Batman and now Lego 2, and I was thrilled to be able to keep the charm and tactile aspects of stop motion. We really worked hard to make it feel as real as possible—like you’re actually in the sets. A lot of that is using the limitations of the characters. We like to keep the acting simple and restrained to how you’d actually move the characters. Also, all the sets are physically built out of bricks in the computer, so everything you see is an actual Lego brick that exists in the world of Lego.

And the film’s point of view has been shifted, too.

We decided to open the world of Lego, since it’s now from a little girl’s perspective. We decided that the little girl would play with different crafts within her Lego world—glitter, paper, fabric—and that these things should also really move as they would in stop motion.

Can you tell me a bit about the flow behind the creative process?

We were working hand-in-hand with Chris [Miller] and Phil [Lord] in developing the script. Being a little sister myself, they’d ask me questions, and we’d talk about the little sister character which informed the world you see on screen. We were coming up with that as we were going from the different planets she inhabits to the things you see on those planets, and all the different characters, we’d design those along the way with the boys as we went.

So, for example, there was no strict adherence to storyboarding?

No, these films are really fluid, which is exciting, because everyone gets to bring their creative voice to them. A lot of times, the storyboard would contain something we found really charming, or it’d be something in the script, or our production designer would pitch something. It was really mimicking the scenes of the movie, where collaborative play gets you the most exciting, beautiful things. We tried not to be attached to anything that would limit us, in order to push our boundaries and be more creative. If someone on the art team had a more exciting idea, we’d riff on that.

Given that, is there any particular scene that’s close to your heart?

It’s difficult because I feel attached to all of them. One I’ll speak to is when the [original characters] meet the queen. All the queen scenes were pretty challenging from an animation perspective because she’s a character built out of a handful of bricks. She doesn’t have rules, she can change into whatever she wants. We started with about 20 set shapes we knew we liked and wanted to use in the movie. Working on the queen scene where she goes into her first musical number, for me that was a moment where we were going to figure out who this character is. As I said before, we don’t cheat. Every shape she turns into is a brick shape that we use. So, really working with the animation team to come up with her as a fun, funny character was exciting.

Did you work with Tiffany Haddish as well, when she was voicing Queen Wa’Nabi?

I did. I was in the booth every day with the actors. It was fantastic working with Tiffany. She’s full of great ideas and is really funny, and she really brought the character to life. What was fun about being in the booth with her is that you get her doing her own movements. The animators would mimic those sometimes, which was really cool because you can see some of Tiffany’s movement in the character.

Did the presence of additional female characters have an effect on the color palette? It appears much richer than in the first movie.

We wanted the little girl’s world to feel just as multifaceted as the little boy’s world. In the first movie, you have Medieval World and Western World and Bricksburg. We wanted to take that and push it, and make her world full of color, characters, with the queen totally different from Sweet Mayhem, for example. We wanted it to feel very eclectic and rich, both in color as well as character.

Speaking of female characters, you also had a role in the film, Velma. Can you tell me about that?

When we’re editing the film before we bring the actors in, we have to make sure: are the lines working? Are they funny enough? So Mike, Chris, Phil, and I just kind of get up there and voice the characters ourselves. Velma was one that always got a laugh from that read, and I was happy enough to be Velma; I love her as a character, I think she’s so funny.