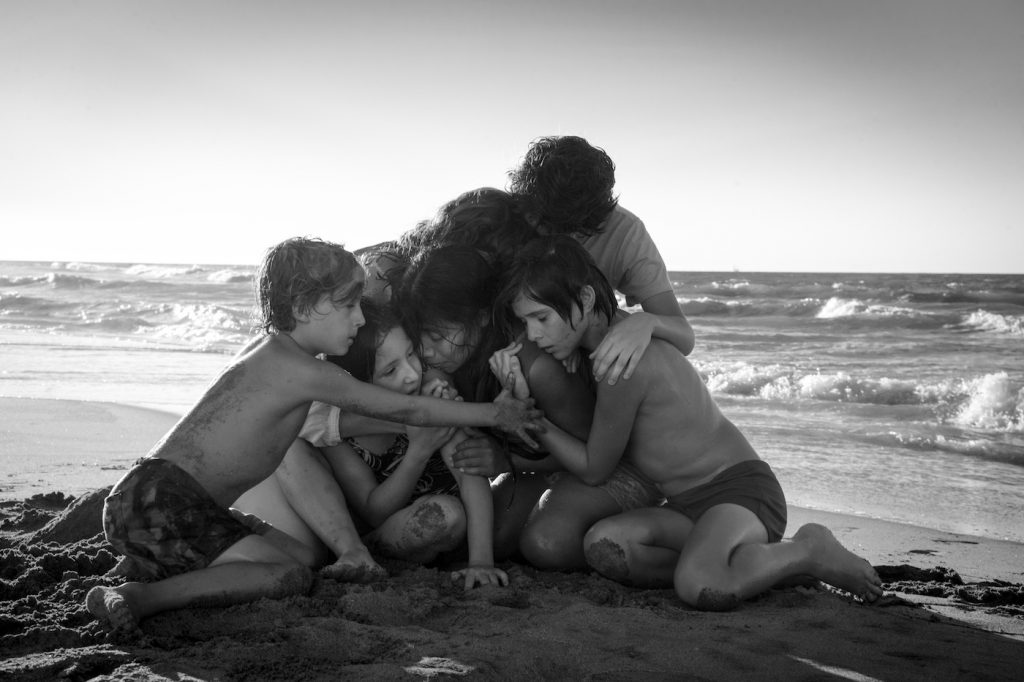 Alfonso Cuarón’s Roma is one of the most astonishing film experiences of the year. The word experience fits, as Cuaron and his team created a lush soundscape that’s nearly as captivating as the shimmering black-and-white cinematography. Then there’s Roma‘s exquisite design, which recreates Cuaron’s hometown of Mexico City, specifically the neighborhood of Roma where he grew up. The focus is on a middle-class family and their live-in servants, told mostly from the point of view of Cleo, played by newcomer Yalitza Aparicio in a captivating performance. Cleo is more than just a servant; she’s much more like a second mother to the children, and through her eyes, we see the tumult inside the house and the growing tensions in Mexico City at large. From the opening shot of soapy water splashing over stones (with the soft roar and reflection of a passing plane captured for a moment on the water’s surface, then gone), Roma is a visual and aural feast, the work of a filmmaker and his trusted collaborators at the peak of their powers.

“The first time Alfonso called me, he said he had this long, dear project he’d been thinking about for many years and thought he was prepared to do it,” production designer Eugenio Caballero said. Caballero, who designed Guillermo del Toro’s Pan’s Labyrinth, helped Cuarón achieve a level of re-creation that Slate’s chief film critic Dana Stevens says “borders on madness.” Choosing a location in Roma close to where Cuarón grew up, Caballero helped him rebuild his childhood home inside the rented house, matching the layouts of the rooms and the interior design from Cuarón’s memory. “In the beginning, we talked about our childhood, about those sensations of childhood, for example, what they’d have for breakfast, what the conversations were around the table, what they did in their free time, like when they sat to watch the television,” Caballero said. “Our initial conversations were more abstract, about our lost neighborhoods because Roma has changed a lot over of the years. We knew the challenge of having to recreate the house on a personal level. If a space isn’t interesting enough, or detailed enough, or contains enough layers behind an actor, it gets boring very soon.”

Cuarón’s siblings provided Caballero everything from furniture to toys from their childhoods to complete the effect.

“The original furniture had fifty years of wear and tear, so we tried to look for the original furniture in the Cuarón family because it was all dispersed throughout the whole Mexican territory [laughs],” Caballero says. “This couch moved there, that chair moved there, so we traced all this furniture, then we decided which piece we could use after reupholstering it, and which piece we’d need to recreate, but it was a beautiful process of changing this house which was completely different into the house you see in the film. The place we built that has the spirit of Alfonso’s house.” 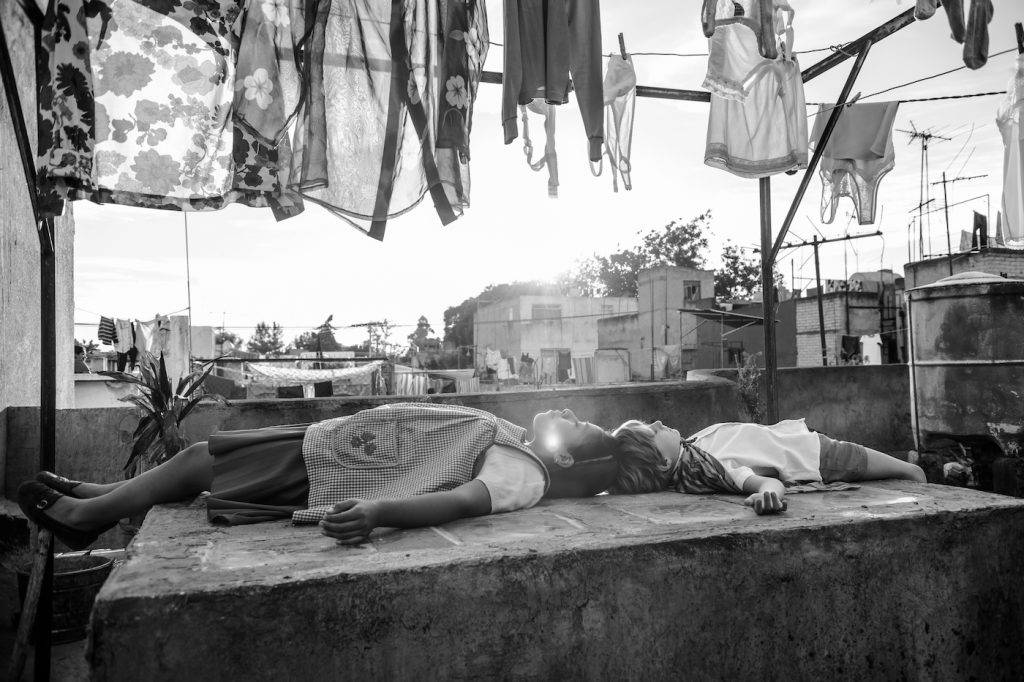 The house they found would have to be totally re-designed, which meant that Caballero and Cuarón looked for a very certain kind of house.

“We didn’t want to do this film on a sound stage because of the way we wanted to light it, plus, we have non-actors, so it would be difficult to feel like we were in a house if we were shooting inside of stage,” Caballero says. “Yet we knew we needed a lot of filming flexibility, so we looked for a lot of houses that were about to be demolished. We changed the structure, took out a lot of walls, changed every tile, changed the floors,” he says. “Basically we used the house’s bones, but we completely changed everything else. We added the kitchen, the service area, we reduced the garden to make it a patio, we reinforced the structure of the house so we could create that rooftop, which we built with movable walls that made it easy, so we could basically pull out the wall, or pull it up, and in four minutes it would be up on the rooftop.”

“It started to become a very personal thing for me as well,” Caballero says. “Sometimes when you’re doing research for a period film, you go into archives and see pictures, but you’re missing a lot of details because it’s hard to get normal photographs that are not grandiose. But here, because you have these family archives from aunts and uncles, you start to get into details you don’t find in normal research. They’re family photos, badly taken photos [laughs]. A lot of photographs were from Alfonso himself, when he was very young he got passionate about still photography, and he had a big archive of photos, some of which was pretty abstract, like a shot of the water faucet on the patio, for example, because he was experimenting with light when he was 12 or 13.”

Caballero was also designing for a film he knew would be shot in black-and-white 65-mm digital cinematography, which meant his color choices were going to be made more for the actors than the viewers.

“When you start translating colors to black and white, a lot of colors have the same shade of gray, so you can choose a blue, a pink, beige, or green, and they will translate more or less in the same way,” he says. “But to apply the correct color on the set to affect the emotions of the actors was a very important task for us. Even though we’d get the same result in black and white, we’d be getting a different result emotionally.”

As the action moves from the house to Mexico City at large, including a scene that captures the 1971 student massacre, Caballero’s job got no easier.

“We understood that we wanted to do a very accurate reproduction of the main streets of Mexico City, and show the worlds colliding in Mexico City,” he says. “All the recreation that we did of the student massacre was in the exact same spot. We did a recreation based upon the photographs, in Mexico there’s no such thing as going to a prop house and getting the period correct weaponry of a police officer, so we had to recreate all of that, we made it for the film. So all the police gear, the vehicles, all of that was created by us.”

The result of all this period-perfect detail, this recreation of not only Mexico City’s past but the director himself, is one of the most sumptuous films in recent memory.

“Everything was very meticulous, and a very important thing that really worked with Alfonso is that every single thing has to have a comment that’s beyond what we’re showing,” Caballero says. “We must connect the viewer to the political turmoil or the social unrest was happening in Mexico. All of that history, all of that past, it’s in every object.”