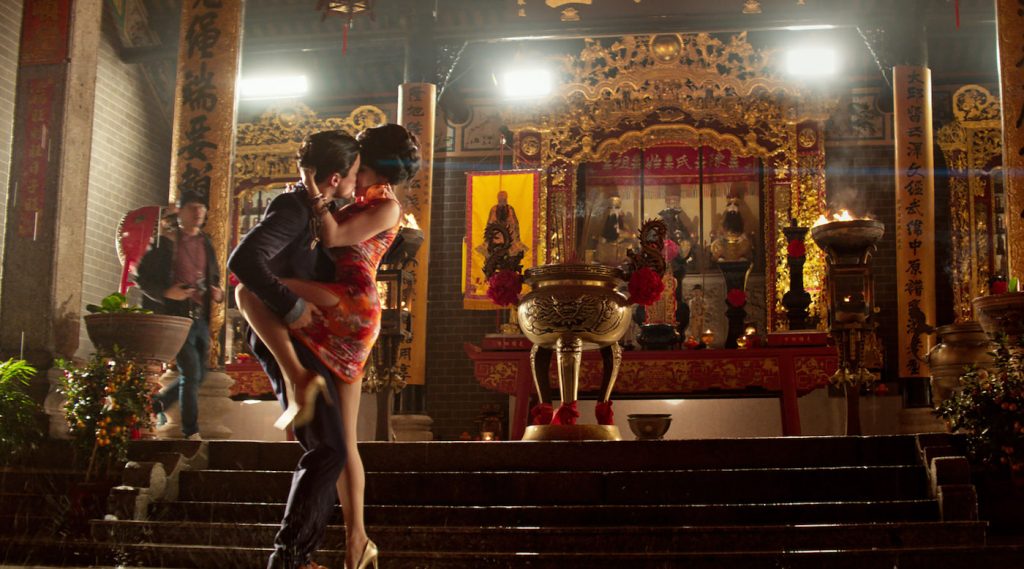 Brian Tyler started playing drums at age four, taught himself piano, guitar and cello soon after, toured the world at age fifteen performing a concerto he’d written and paid his way through Harvard by playing in rock bands. More recently, he’s scored more than $1.2 billion worth of global blockbusters including Avengers: Age of Ultron, Fast & Furious, and Iron Man 3. His latest hit, Crazy Rich Asians, Oscar short-listed for Best Original Score, afforded Tyler a rare opportunity to compose the type of big band jazz music he first fell in love with as a child. “Growing up I remember listening to Buddy Rich play drums on ‘Sing, Sing, Sing,’ and then John Bonham of Led Zeppelin,” says Tyler, raised in Orange County, California. “I decided a big tom sound would be a fun way to kick things off for Crazy Rich Asians before we go into the theme.”

Scoring a contemporary movie set in Singapore with American-sounding big band jazz numbers may seem counter-intuitive, but Tyler notes that director Jon Chu‘s rough cut of Crazy Rich Asians inspired him to go retro. “Jon gave the movie such a throwback look, it jumped off the screen almost like the Technicolor musical West Side Story or something,” he says. “We wanted a score that sounded as if you could have gone back in time and recorded the music in the 1940s or 1950s.”

Tyler also embraced old-school composing techniques to get his ideas across. Instead of recording a “mock-up” demo on synthesizer, he played the music for Cho on the piano of his Hollywood recording studio. There, the composer surrounds himself with two grand pianos, two drum kits, marimba, vibraphone, bass, cello. Speaking from that vantage point earlier this week, Tyler says, “I’ve also got a ton of guitars, all sorts of percussion instruments, mandolin, I have a kobo sitting right here, and a glockenspiel and what not. I play all these instruments myself, which is something I love doing.”

Once he’d notated the big band arrangements with pencil and paper, Tyler assembled 35 jazz players at the Eastwood Studio in Burbank and recorded the band with vintage microphones. He says, “These musicians were really the cream of the crop. The music sounded so much better than I’d ever imagined in my head because these guys put so much passion into what they do.”

The buoyant big band grooves enhance Crazy Rich Asian’s feel-good sequences, but for the dramatic “love themes” that intensify as the story progresses, Tyler enlisted a 65-piece orchestra. The Singapore-appropriate twist: In place of violins, he featured a traditional Chinese stringed instrument called the erhu. “It’s the closest thing the Chinese have to violin, except it only has two strings,” Tyler explains, ” The erhu sits upright in your lap, almost like a very small cello turned sideways, which is wild.”

Tyler also wrote solo parts for the xiao, a Chinese bamboo flute. “It’s something I’d never done before, but we really wanted the music to reflect Singapore, which is this really interesting junction point,” he says. “It’s very influenced by Chinese culture but at the same time, they speak English. Singapore’s got technology and architecture and food from both the east and from the west, so it felt like a natural thing to merge all these different worlds in the music.”

Crazy Rich Asians represents a departure from the Hollywood action spectacle for which Tyler is best known. He’ll be returning to the genre later this year to score D.C. Comics-based TV series Swamp Thing. But for now, Tyler is savoring his musical immersion in the romantic comedy realm. Describing the fish-out-of-water story of a New York woman (Constance Wu) forced to tangle with the wealthy Singapore family of her boyfriend (Henry Golding) for the first time, Tyler says, “I think it’s a timeless storyline we can all relate to, where you’re trying to fit into a place that doesn’t necessarily want us.” To make the journey sing on screen, he continues, “We needed fun on one side and heartbreaking on the other. The music had to be more classic.”