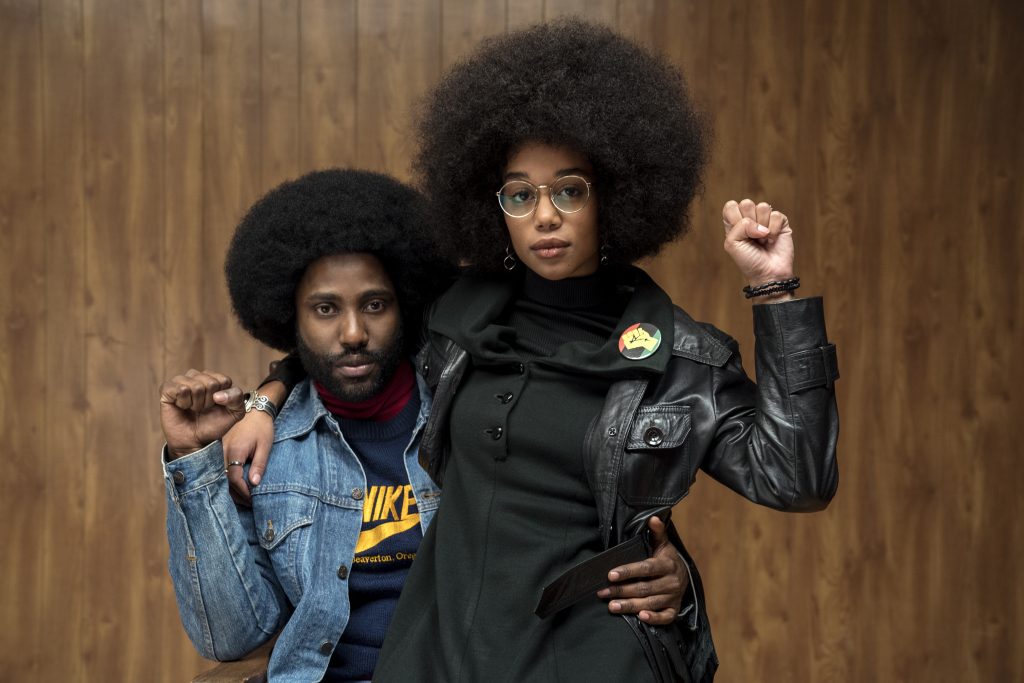 Oscar Watch: BlacKkKlansman Hair and Makeup Designers on the Impact of Appearances

BlacKkKlansman was one of the most stirring films of the year with a chilling portrayal of hatred. In typical Spike Lee fashion, it was also funky, cool, and completely enthralling. The true story of dangerous prejudices and brave efforts to fight back was rooted in appearance. Some of the most monstrous of the characters masqueraded in a façade of normalcy.

“As far as the Klansmen, I wanted some of them to look like normal people and clean-cut,” makeup department head Martha Melendez said. “People that you would run into on the street but you would never know that the universe they live in is different than yours. You never know who you’re brushing shoulders with. Others I wanted to identify as gritty like backwoods people. I had two different groups in my mind when I collaborated with my key, Kim Collea, as to how we wanted to make distinctions in that group.”

Hair department head LaWanda Pierre-Weston completed the looks. Despite the film being inspired by a true story, the secrecy around the Ku Klux Klan made them difficult to research. The organization terrorized communities under literal cloaks of anonymity. The hair department had to imagine what laid beneath the hoods of hatred.

“For the KKK members, we wanted them to look like regular people. Just good American citizens who had this alternate life going on,” Pierre-Weston told us. “There is no way to really research KKK members. When you look up KKK you see hoods and robes. There is no way to really see what they looked like underneath. They just looked like regular Americans. We wanted some of them looking clean-cut and people who had everyday jobs and some who looked like backwoods country gritty people.”

Melendez and Pierre-Weston both tried to suspend stereotypes and portray realistic characters. KKK members were difficult to identify and permeated throughout communities. Their ability to blend in was part of the reason officer Ron Stallworth (John David Washington) went undercover to infiltrate and study the organization.

“Sometimes you look at someone and they look gritty and you might think because of the way they look he looks like a redneck and he must be KKK. In the meantime, he might be the most liberal person that you could meet,” Melendez cautioned.

“But then again if they had a Confederate flag on their car, he’s a little proud of what he believes in,” Pierre-Weston added.

Beyond having radical beliefs, the KKK and affiliates looked dated. BlacKkKlansman production designer Curt Beech described to us last year how the Klan members were stymied by their ignorance as the world moved on. Melendez described the same effect in their personal appearance.

“Connie (Ashlie Atkinson) was an interesting character because she had makeup on and it was looking dated even for the 70s. She was dated in the 70s.”

By contrast, the student activists in BlacKkKlansman were at the forefront of a new era. They were young, passionate, and proud of their African American heritage. Pierre-Weston created custom pieces to accentuate natural hair looks.

“Laura [Harrier]’s hair was a wig that I made myself,” Pierre-Weston said. “Spike was very adamant about the afros looking real and authentic to the 1970s and not like a modern afro. We did everything we had to do, Shaun and Taurance Williams and I, with picking out the hair and cutting it to different shapes and having different textures and colors and we wanted to show there were many different styles within that realm of naturals back then.”

Stallworth also wears an afro, which comes off as a bold symbol of pride as the first black officer in Colorado Springs precinct. Rather than try to conform, Stallworth’s appearance signals other changes in the office culture he brings to the force.

“John David [Washington]’s wig was made by myself and Chantell Carrtherol,” Pierre-Weston said. “She ventilated a few inches of his hairline and I just tracked the rest and colored it, picked it out. Shaun Perkins is my key. He really helped to shape the wig and give it that perfect roundness that we wanted.”

Melendez engaged in extensive research to recreate the era of the story. In addition to speaking directly with the real-life Ron Stallworth, she delved into online archives and yearbooks. Still, she faced a particular challenge with the time gap in being able to recreate 70s style makeup.

“The products for makeup were very different than the products we have today,” Melendez explained. “For caramel to dark skin, things were very limited. Things were very ashy or had green undertones. The colors weren’t friendly for darker skin or caramel looking skin. I’m very thankful we have now a plethora of products out there that there is something for everyone. Yet, we can’t make it look like it’s today.”

Melendez and her team were constrained by the more limited products available in the 70s. They had to be careful about their design and application to remain faithful to the era.

“The challenge from the makeup side was to make sure that everybody’s skin looked like skin,” Melendez said. “It didn’t look like they were wearing makeup. In the big shots that we wanted to show that [student] group with the distinction of having makeup because they’re not fully in the movement, and the ones in the movement looking more like their natural skin. When you have some that’s a little off, that was done intentionally to show that was the way it was back then. I think that adds to the film and looking like you’re really walking through the 1970s, not people dressing up playing 1970s.”

With Oscar buzz swirling around their work, Pierre-Weston and Melendez are grateful for the opportunity to share their art.

“When you work with people who you really admire and you work with people who are passionate about what they do and enjoy what they do, it really makes the 12 hours feel like a breeze,” Pierre-Weston said. “Working with Martha and the whole hair and makeup team and Spike, it’s a really family atmosphere. This is an added bonus that the film is getting all this recognition.”

“We’re just happy to be here,” they added in unison.

“I thank God I was able to put mustaches and sideburns on and lipstick,” Melendez laughed. “I am very happy.”