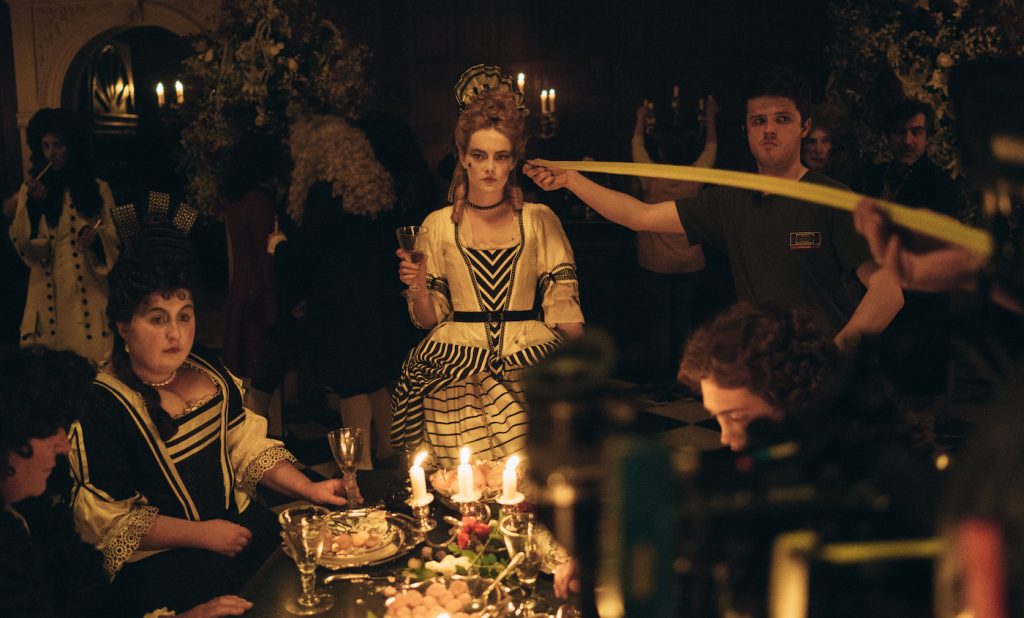 Actors adore working for Lanthimos, but so, too, does his crew—just look at the results. Cinematographer Robbie Ryan was nominated for an Oscar. As was costume designer Sandy Powell, editor Yorgos Mavropsaridis, production designer Fiona Crombie, and co-writers Deborah Davis and Tony McNamara.

“Basically, Deborah had this great story; she knows history really well, and she had this story about Queen Anne that Yorgos really liked,” McNamara says. “And of course he’s Yorgos, so he had a very particular take on this world. In short, he wanted a very different kind of period movie.”

Lanthimos got in touch with McNamara, an Aussie who was down under making TV shows, to see if he could give Davis’s script a pass. McNamara was excited—what writer wouldn’t be thrilled to work with the man behind Dogtooth–so he set to work. For seven years.

“We didn’t know who would be playing the roles,” McNamara says. “We were working on it together for seven years, doing drafts, and then he went and made The Lobster. I knew he really loved Rachel and Olivia, and then he met Emma and he was happy to wait for them all to be free and be ready to do it.”

McNamara and Lanthimos knew they were making a tragic comedy, set in the highly stylized world of the British Royal court, but they never intended on making this a pure period piece.

“Part of why Yorgos wanted me to do it was, tonally, I was roughly in the world he wanted me to be in,” he says. “It was about making a different kind of period movie, a little more contemporary, a little brasher, a lot less polite, like a contemporary film.”

It becomes evident almost immediately that, despite the ravishing sets and the costumes and the makeup, the relentless schemers surrounding Queen Anne, and the queen’s own peculiarities and ailments, make The Favourite a moviegoing experience unlike any other this year. The queen lacks attention to her duties, she has gout, and she keeps 17 rabbits, one each for the children she has lost, so you know in a Lanthimos world. This is all before a dancing sequence that goes from something vaguely traditional to a modern dance routine, all with Queen Anne watching in increasing distress.

“That early dance scene [laughs], we were in rehearsal and we had a choreographer in there, and I just knew we were doing something really different,” McNamara says. “I think it’s such a great moment in the movie.”

Lady Sarah and Abigail vie, scheme and attempt murder in an effort to secure the Queen’s favor. On paper, these are fairly sinister characters. Yet they’re also incredibly compelling, with three standout performances that make it difficult to pick a favorite. This was by design.

“I personally don’t like period movies, so The Favourite was sort of what a period movie I’d like to see would look like,” McNamara says. “With our triangle of women, we didn’t want to make one good and one bad, we wanted them all to behave badly. They were quite flawed, complicated human beings. As long as you understood why they did things, it didn’t matter what they did. Once you have a triangle in a story, it gives you a lot of room to surprise.”

McNamara also helped lead the charge on when to lean into the actual history, and when to pull back.

“We used history where we liked it, but then we made up scenes that we thought would be better for our characters and make a better movie,” he says. “It was a fun movie to write because they’re really great characters, and get to play with a lot of plot twists and to do it in a non-traditional way.”

While The Favourite is dominated by the three central female characters, the men in the film create a kind of absurdist coterie of heavily painted, be-wigged lunatics. This is evident not only in their behavior, but in how they look.

“In that period and on that whole side of politics, it was the men wore ridiculous makeup and massive high-heeled shoes and crazy wigs,” McNamara says. “Yorgos is such a visual genius he made their looks even better. Yorgos is bold, there are no rules, he wants to push it and make something that’s very true to him and very its own thing. He’s not trying to follow anyone; he’s his own creative force. It’s fun to be a writer in on that.”

After all those years of work, nominated for a Golden Globe and now an Oscar, McNamara finds that the film is still offering him fresh surprises.

“I notice something new every time,” he says. “The actors land their lines so astonishingly well, all of them. To write comedy and have Emma Stone landing your punchlines? To have Olivia, to have Rachel, to have Nick Hoult? They’re so impeccably good at it, even your so-so jokes land brilliantly. As a writer, you’re thinking, this is a real blessing.”