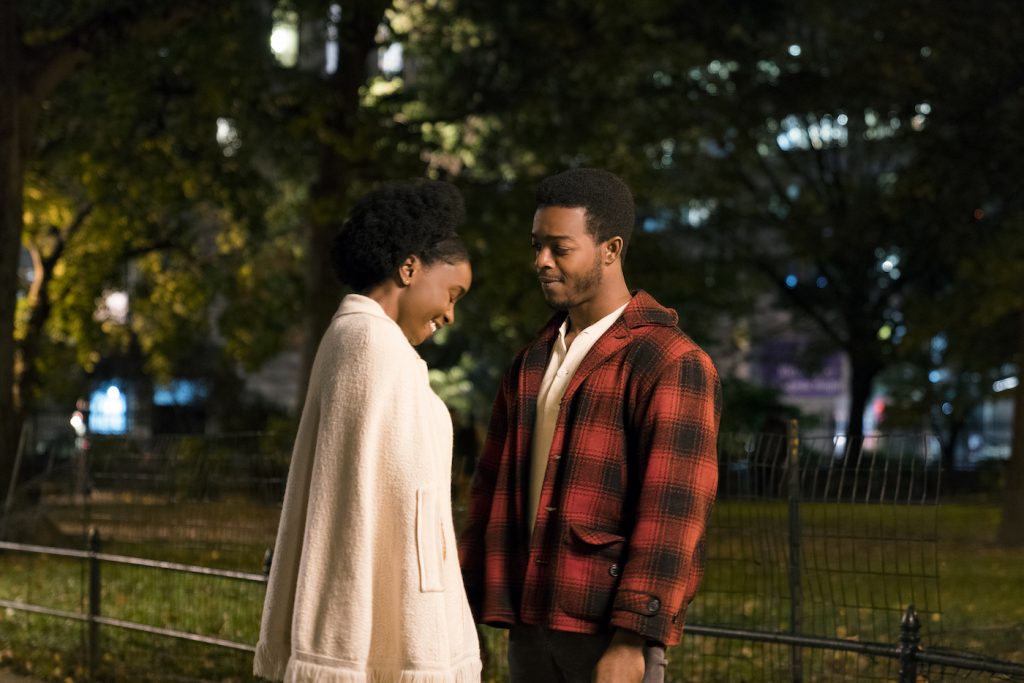 In the beginning was the word, as set down by James Baldwin in his 1974 novel “If Beale Street Could Talk.” The movie adaptation from Moonlight auteur Barry Jenkins and his team drew on Baldwin’s text when it came to visualizing this story for the big screen. Costume designer Caroline Eselin-Schaefer says, “James Baldwin gave us so many cues, we wanted to honor him as much as we could.” The story follows pregnant 19-year old Harlem native Tish Rivers (Kiki Layne), whose sculptor boyfriend Fonny (Stephan James) goes to jail after being falsely accused of rape by a racist cop in Greenwich Village. Tish’s mother Sharon (Regina King) spearheads the fight to save Fonny from a lengthy prison term.

Inspired by Baldwin’s writings, Eselin-Schaefer created a color-coded “mood board” for each character. In the case of Tish, Eselin-Schaefer scoured numerous New York City vintage stores before finding the signature yellow cape that first appears in the movie’s opening frames. “For Tish’s early scenes with Fonny I wanted to show the innocence and purity and optimism of this young woman,” Eselin-Schaefer says. Her yellow poncho and blue blouse are mirrored exactly by Fonny’s blue jacket and yellow shirt. “They’re soul mates, they’re going to have a beautiful life together, so we were trying to show that in a kind of timeless way through these colors and silhouettes. Later, when Tish visits  Fonny in jail, the clothes become a bit harder, a bit darker, so you can see this arc of maturity happening as the story unfolds.

To make sure the wardrobe accurately reflected the period, Eselin-Schaefer studied images captured on the streets of Harlem in the late sixties and early seventies by photographers including Gordon Parks and Jack Garofalo. She became especially obsessed with Paul Fusco’s series of color photographs documenting the 1968 funeral train of Bobby Kennedy. “It gave us the most beautiful guide for our color palette,” she says. “We also looked at Bruce Davidson’s photographic essay ‘The Tombs’ about the New York City prison that held all these African American gentlemen. We did all that research at the beginning and then jumped off from there.”

Beale Street’s tour de force sequence, from a costume design standpoint, happens early in the film when eight characters from two families crowd into a single room and start arguing about Tish’s newly announced pregnancy. Eselin-Schaefer explains that each outfit spoke volumes about lifestyle and value system. “Regina King’s character looks relaxed in black pants and red shirt, having just come home from shopping. Tish’s father is dressed down after a day of work. Tish has a green blouse, which is a symbol of growth and birth. So Tish’s family have style, but they don’t look like they’re going to church.”

By contrast, Fonny’s mother Mrs. Hunt (Aunjanue Ellis) wears a formal ensemble, complete with gloves, as befits her uppity attitude about the unwed couple. “She’s the paragon of self-righteousness,” Eselin-Schaefer says. “We had these sixties photographs of church ladies, so our idea for the sanctimonious Mrs. Hunt was that she’s always dressed for God. We put her in the sunniest, brightest most hypocritical color we could find.”

Eselin-Schaefer again turned to Baldwin’s writings to devise the costumes for Mrs. Hunt’s daughters Sheila and Adrienne (Dominique Thorne and Ebony Obsidian). “In the book, Baldwin wrote Adrienne as wearing something too young for her, and Sheila is written as wearing something that’s too old for her. So if you look closely at Sheila, that periwinkle shirt and skirt is wearing her, she’s not wearing it. She’s trying to be something she’s not. And for Adrienne, it’s sort of like a baby doll dress, which is too youthful for someone her age.” Mrs. Hunt’s husband Frank (Michael Beach), sympathetic to Tish’s predicament, seems more comfortable in his own skin. “Frank used to have a tailor shop and works in the garment district now, so he’s a bit flashier,” Eselin-Schaefer says. “He’s got ‘nice threads,’ which is something you would hear people say about clothes back then.”

With Moonlight and Beale Street under her belt, Eselin-Schaefer looks forward to re-teaming with director Jenkins next year on The Underground Railroad. “Barry Jenkins is amazing because he really gets in the trenches with you,” she says. “Toward the end of the movie when she’s very pregnant, Trish wears her mother’s sweater when she visits Fonny in jail. That’s Barry Jenkins all the way. In that moment, he wanted to have a piece of Sharon on Trish.”