Basking in Barry Jenkins’ Moonlight at the Middleburg Film Festival

Barry Jenkins' Moonlight played to a packed house at the Middleburg Film Festival, and for 110 minutes the crowd was mostly silent and rapt. Masterfully touching upon three periods in a single life, Moonlight is the rare film that manages to feel fully realized but impossibly swift, and I for one both wished the film had lingered just a little bit longer and was stunned by how quickly it had managed to move me, and then fade to black.

The main character in Moonlight has three different names at three different ages, and is played by three different actors. When we first meet him he's just a boy, and a small boy at that. Everyone calls him Little (Alex Hibbert), and he's hiding from a group of boys in an derelict apartment in a drug-riddled part of Miami. He's found there by a Cuban American drug dealer named Juan (a fantastic Mahershala Ali), who, sensing the boy's reluctance to go home (and his reluctance to speak) takes him back to his house instead, where he lives with his girlfriend Teresa (the musician Janelle Monáe, whose acting chops bely her inexperience). Little is short on words because he's neglected by his crack-addicted mother (Naomie Harris), and his two new would-be protectors take a shine to him. In their comfortable, loving home, Little wordlessly takes in all that he's missing in his own life. A bond is formed between the three, one that will carry on through the portion of Little's life that Jenkins allows us to see. Juan is the masculine ideal, and Teresa is mother he wishes he had.

The film is somehow filled with multiple sequences that linger long after its over, even though it doesn't even run two hours. Take the swimming lesson that Juan takes Little on in the ocean. It's a brief burst of tenderness, nearly wordless and utterly spellbinding. 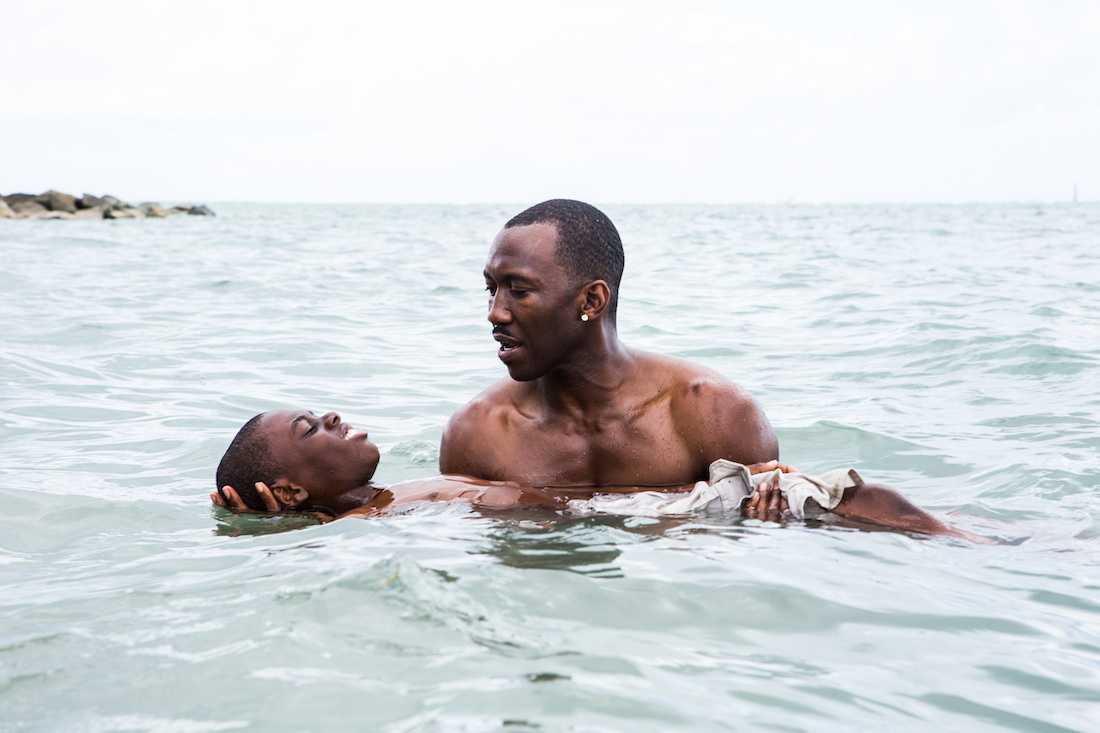 Alex Hibbert and Mahershala Ali. Photo by David Bornfriend, courtesy of A24

Another scene at Juan and Teresa's dinner table takes you, again with incredible economy, to the source of Little's anguish; he repeats a word his mother calls him, and asks them to define it. The word is "faggot."  Juan's loving attempt to absolve him of the burden of knowledge, and Teresa's wise, humane control of the situation, keeps Little from feeling any worse than he has to. But considering Little's mother has bought crack off Juan, and the fact that both Teresa and Juan are no doubt well aware of the struggles Little will face moving through the world as African American and gay, no one at the table feels good. 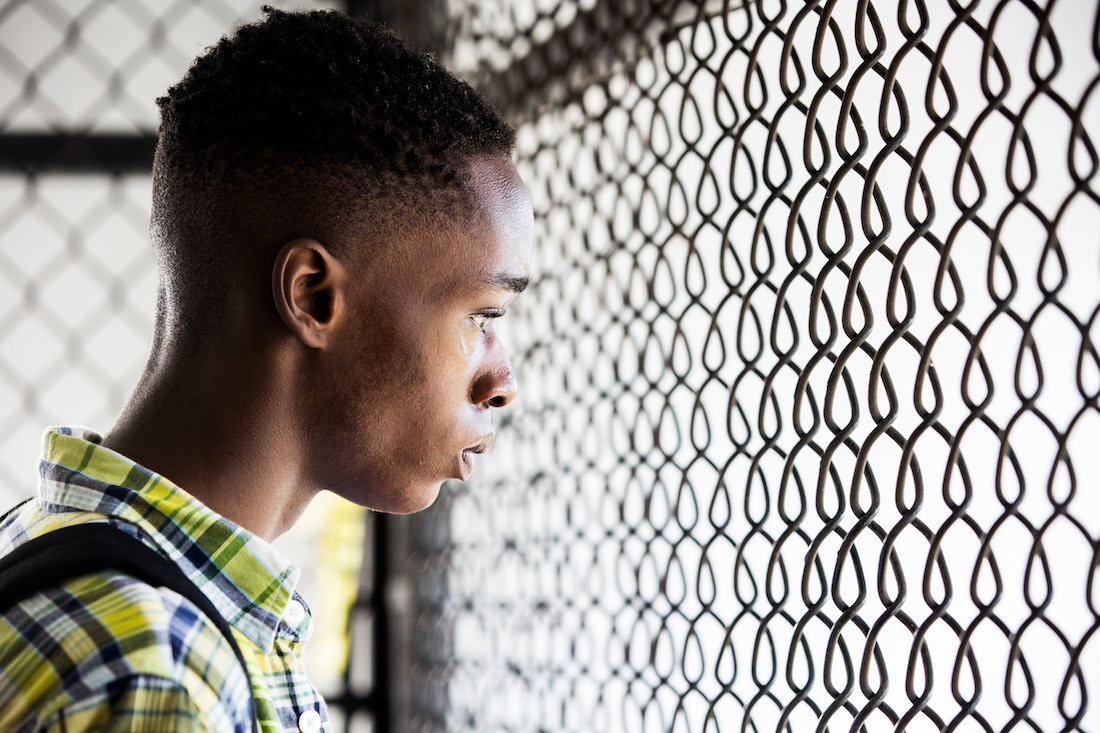 Ashton Sanders Photo by David Bornfriend, courtesy of A24

As a teen-ager, Little now goes by his given name of Chiron (Ashton Sanders), and his life in high school is a misery. He's tall but skinny, all awkward silence and timidity, and so is a natural victim for the more aggressive boys in school. Their taunts and threats are the ambient noise of his life, and things at home with his mother are even worse. She begs him for money, she kicks him out when she's having company over, and she resents the attention he still receives from Teresa (Juan is gone, his absence isn't explained and doesn't need to be—how many fates could he have had? The fact that you couldn't help but love him in his brief turn in the film makes this silence only more potent). Juan was a model of masculinity for Little; strong but kind, comfortable in his body, projecting confidence and cool. With Juan gone, the gangly Chiron wants to project strength and confidence but can't. Not yet.

Outside of Teresa's affection, there is one other source of potential comfort for Chiron; a classmate named Kevin (Jharrel Jerome). In another of the film's many gorgeously shot scenes, and again, created with a minimum of fuss and perfect pacing, Kevin bumps into Chrion on the beach. The former has gone out to smoke a blunt, the latter likely has nowhere else to go. Kevin's easy confidence is also touched by a tenderness towards Chiron that blooms into passion. Under the moonlight, Chiron has his first sexual experience. The scene is lovely, shot with delicacy and great care (seeing Chiron's hands clasp and close in the sand in a moment of ectasy is a particularly striking touch), and Kevin is so adept at getting Chiron to open up, even joking with him on the car ride home, you hope this might mark a turn in Chiron's life.

It does, but in an agonizing way. One of Chiron's tormentors, with that uncanny sense bullies have, decides that Kevin needs to rough Chiron up. And just like that, the moment on the beach is shattered when Kevin, in front of dozens of other kids and at the taunting of Chiron's bullies, punches Chiron in the face. "Stay down, Chiron," he begs him, but Chiron won't. He keeps getting up, increasing his torment and, in this way, getting back at Kevin by making him hit him again and again. After this humiliation, Chiron returns to school with a look of concentrated rage on his face. He enters his classroom, he picks up a chair, and he brings it down on the back of his tormentor.

In the third and final section of Moonlight, Chiron is now a grown man nicknamed Black (Trevante Rhodes), thickly muscled and, just as Juan had done, wears a gold grill on his upper and lower teeth, diamond earrings and a do-rag. His life mimics Juan's in another way, too; his line of work. Black lives in Atlanta and is sells drugs, treating his employees with the same competent, calm distance that Juan had done back in Miami all those years ago. He's a lonely man, but has made some peace with his mother, who now lives in a drug rehab facility and who seems genuinely heartbroken about the way she treated him. Then Black gets an unexpected phone call from a grown Kevin (André Holland), who has tracked him down to apologize for what happened when they were kids. Kevin spent some time in jail and is now a cook at a diner down in Miami. It's all Black needs to hear—he drives down there to see him. 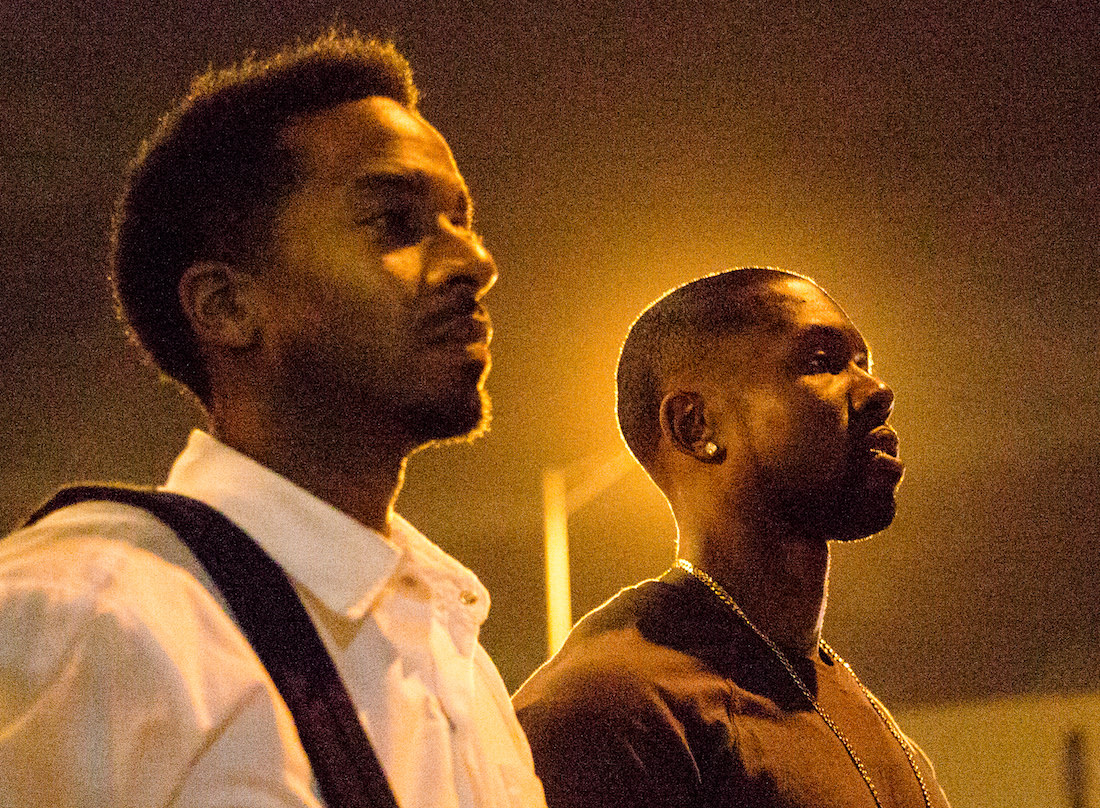 Andre Holland and Trevante Rhodes. Photo by David Bornfriend, courtesy of A24

The peformances in this scene at the diner are, simply put, mesmerizing. Rhodes' subtlety and Holland's electric charm make the last few minutes of the film some of the best I've spent in in a theater in recenty memory. There's no recrimination over what happened in the past, no long monologues about time lost or paths not taken. Black is reticent and sullen, but Kevin, once again, sees right through him to the tender, watchful person he is. Kevin whips him up the chef's special, opens up a bottle of wine, and slides into the booth across from him. Black tries to play it cool but Kevin easily bats away his hardened drug dealer persona, rightfully pointing out that he just drove all the way from Atlanta to Miami to see him. The moment they share that involves the diner jukebox is as romantic as any you'll see this year, or any year.

And here I'll stop, for the finish to this remarkable film is something you'll need to experience yourself. Moonlight began its life as a short play by Tarell Alvin McCraney, who is from the same Miami housing project as Jenkins (although they didn't meet until they were adults). Both Jekins and McCraney had mothers who were addicts, and their expeirences give life to this remarkable story about a boy's fraught journey into manhood, in a setting and a culture that seem designed to break him. Without any rousing speeches or easily identifiable monsters (even Chiron's bullies are, in the end, just kids), the film champions the incredible strength and courage ordinary people like Chiron, Juan, Teresa and Kevin show every day, and the power even the smallest kindness can have over someone. In this case, that someone is Chiron, who by the film's remarkable close has become as unforgettable a character as you're likely to see.

Moonlight is playing in select theaters near you. Click here to find out where.

Featured: Alex Hibbert. Photo by David Bornfriend, courtesy of A24​