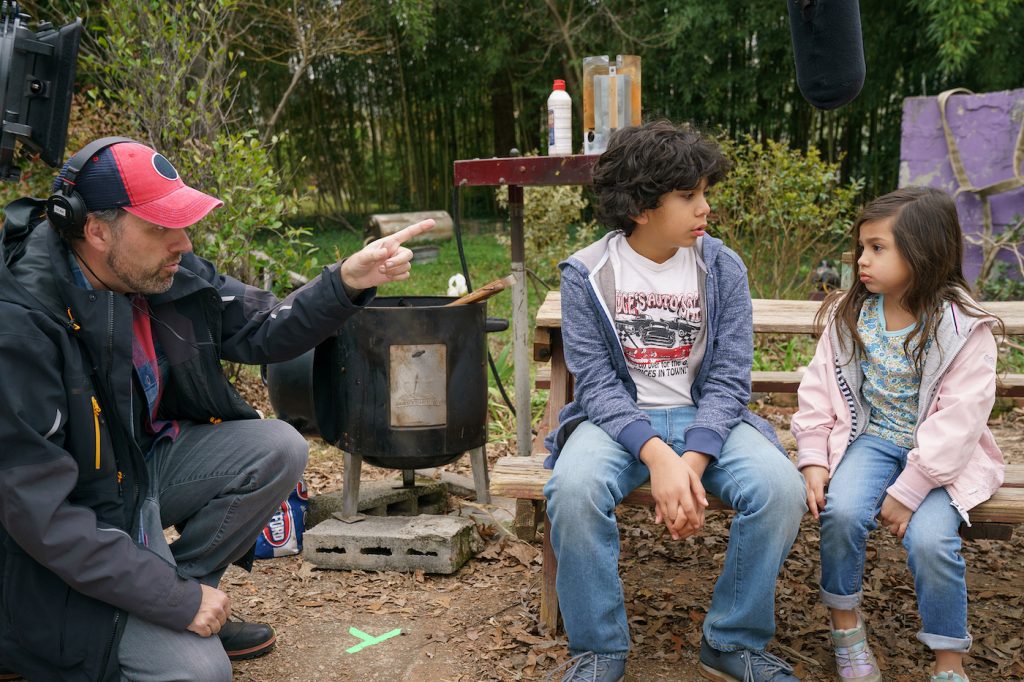 All films scripts have some degree of personal connection to the writer. But for Sean Anders, the writer-director best known for comedies like Sex Drive (2008),  That’s My Boy (2012) and Daddy’s Home (2015), his latest, Instant Family, mixes heartfelt drama with laughs as it mirrors Anders’s own experiences adopting three kids through the foster care system seven years ago.

Instant Family is about a couple, Pete and Ellie (Mark Wahlberg and Rose Byrne) who, like Anders and his wife, Beth, wade cautiously into the waters of foster care with the idea of taking in one small child. Instead, they find themselves with three unruly siblings headed by rebellious teenager Lizzie (Isabela Moner). There are family comedy laughs but the movie doesn’t shy from more dramatic complications. Octavia Spencer and Tig Notaro play social workers who hold classes and support groups as they balance the needs of often-neglected kids with nervous, prospective parents.

“In some ways, writing this [script] was easier because I was my own expert on it. In other ways, it was more daunting because it’s more dramatic than the comedies I’ve done in the past; the subject matter is heavier so there was a lot of pressure to get things right,” says Anders who again worked with writing partner John Morris. “It is fiction inspired by my life, but also by the lives of a lot of other families that I met along the way. That was new territory for me as well: to have a big chunk of the prep process be in research and interviewing people for hours and hours.”

Balancing broad comedy with drama and poignancy was a delicate balance from the first draft right up through the final edit, he says. “It was always our intention to make the film a roller-coaster ride of emotions: laughs and tears and heartwarming moments, so a lot of work and care was put into that.”

He credits co-writer and friend Morris with helping him gain perspective. “He’s a father but he didn’t have the same experience with adoption and foster care. So it was great to have a sounding board for all of it who wasn’t as close to it as I was,” says Anders.

Despite more personal and sensitive material, Instant Family was always meant to be a commercial crowd-pleaser, says Anders.

“I wanted to send a message with the movie and have people come away with a better understanding of who these kids in the system are. People tend to be afraid and have trepidations that are not founded. They’re just kids who need families and who need love. The more people who see [the movie] as a commercial endeavor, the more who’ll get that message. Our intent from the beginning was to make an entertaining comedy that was also honest storytelling.”

The film fell into place once Mark Wahlberg, who starred with Will Ferrell in Anders’s hits Daddy’s Home (2015) and its sequel Daddy’s Home 2 (2017), jumped at the chance to play Pete, the handyman who’s worried about taking in foster kids vanish as he grows to love them.

“Mark has incredible sincerity and earnestness,” says Anders. That’s why he’s so funny and he can play a good tough guy. He’s a great dad and a family man, he’s had experience with all of that. We wanted a regular ‘guy’s guy’ who is going to go on this journey and learn to fall in love with these kids. So when he said ‘yes’ it was the greatest moment not just of my career but of my life.”

Anders’s own journey to becoming one of Hollywood’s most successful screenwriter-directors started when he picked up a camera and shot his first film, the 2005 micro-budgeted Never Been Thawed. He co-wrote, directed and starred in the zany comedy, shot in and around Phoenix, Arizona for less than $35,000.

“I was always a movie lover growing up. I got a crappy video camera and edited on a laptop with friends. I did it for love. It turned out to be funny and that worked out; I was able to get an agent and a manager. It started organically with the idea to just make a silly movie to make my friends laugh.”

Now Instant Family is making his friends and family tear up as well.

“If we played it like ‘The Brady Bunch,’ it would have felt silly and false,” says Anders. “We needed the difficult and real but we always brought it back to laughter. It’s ultimately about family. Even if you don’t have experience with foster care or adoption or even any interest in it, there is a lot you can relate to. At the end of the day, they really are just a family.”