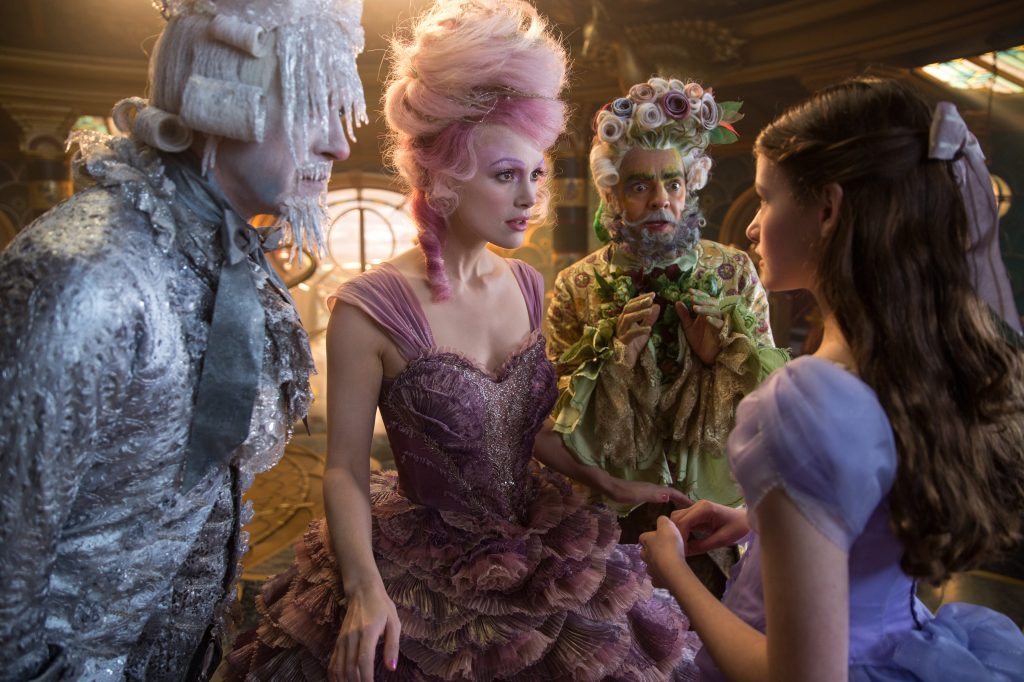 “There’s one side of acting that I have always loved, and that’s the costume side,” Dame Helen Mirren professes in a new featurette for The Nutcracker and the Four Realms. And she has worn some fantastic ones from Mike O’Neill’s designs for Elizabeth I to the Excalibur costumes designed by Bob Ringwood. Her ensemble for Mother Ginger in The Nutcracker and the Four Realms may be her most fanciful yet.

Costume designer Jenny Beavan, who has collaborated with Mirren previously on Gosford Park, has created some stunning looks for the fantasy film. The detail is really incredible with so many textures, layer, and colors. With a Victorian background, Beavan really let her imagination run wild. Eugenio Derbez appears to be wearing an entire fresh bouquet for his role as Hawthorne. Mackenzie Foy gushes that one of the most magical in her wardrobe is a light up dress and it is truly winter wonderful. Her favorite, however, is the soldier look that is so fierce on both her and Jayden Fowora-Knight as Philip.

Costumes in traditional ballet are critical. There is no dialogue in Tchaikovsky’s staging of The Nutcracker, so in addition to the movement, music, and acting, costumes play a major role in communicating ideas to the audience. The joy of the classic Christmas ballet is the wide variance of characters. As any young dancer knows who has stared at a cast list for their local production searching for their name, there are gingerbread soldiers, giant mice, snowflakes, sweets, flowers and more. To help convey the plot, they have to look the part.

Of course, The Nutcracker and the Four Realms is a loose adaptation with a much more complicated plot and will feature dialogue. Still, many of the same characters including Clara, Drosselmeyer, Mother Ginger, and the Sugar Plum Fairy will appear. Beavan’s designs are whimsical and magnificent and already beckoning us to each of the four realms.

The Nutcracker and the Four Realms dances into theaters November 2.

Featured Image: Richard E. Grant is Shiver, Keira Knightley is The Sugar Plum Fairy, Eugenio Derbrez is Hawthorne and Mackenzie Foy is Clara in Disney’s THE NUTCRACKER AND THE FOUR REALMS.