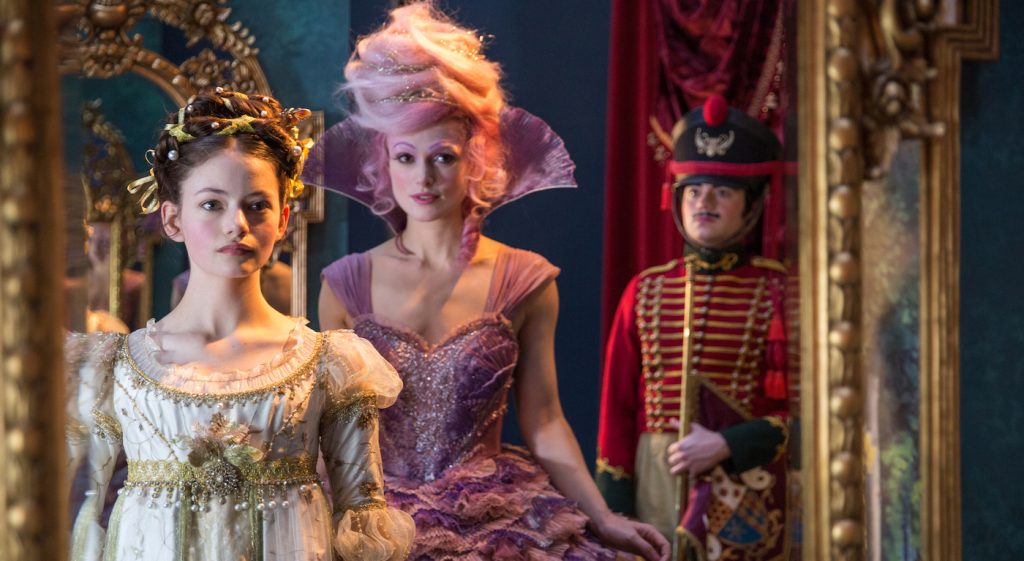 Mackenzie Foy is Clara, the young girl whose search for a key made by her mother lands in her a magical realm of toy soldiers, ballerinas and Sugar Plum Fairies. The Nutcracker and the Four Realms will introduce E.T.A. Hoffman’s 1816 story “The Nutcracker and the Mouse King” to global audiences in this Disney adaptation, taking the classic fairy tale and adapting it (while enhancing many of the mystical elements) for the big screen. In the second official trailer for the film, the directing duo of Lasse Hallström (The Hundred-Foot Journey) and Joe Johnston (Captain America: The First Avenger) look to have delivered a big, sweeping epic filled to the gills with gingerbread soldiers, wicked tyrants, and an army of mice. You’ll notice a lot of nods to popular fantasy franchises here, from Disney’s Alice in Wonderland to The Chronicles of Narnia, with a cast that includes Keira Knightley, Morgan Freeman, and Helen Mirren. Nutcracker looks to be just as big and immersive as recent Disney adaptations like Beauty and the Beast and Maleficent Have a look at the trailer:

The plot is somewhat hard to discern from the trailer so we’ll spell it out for you. The Nutcracker and the Four Realms centers on Clara (Foy), whose godfather Drosselmeyer (Freeman) gifts the youngster a golden thread that ultimately leads her to the aforementioned key from her mother. Only Drosselmeyer’s up to something, because what she finds at the end of the thread is a parallel world created and once ruled by her mother. Here she meets the Sugar Plum Fairy (Knightley) and Phillip, a soldier (Jayden Fowora-Knight), who school her on some of the particulars of their world. Soon Clara’s off on a mystical journey across lands that sound pretty wonderful (the Land of Snowflakes, the Land of Flowers, the Land of Sweets), but are under a cloud of threat and malice and finally thanks to the evil Mother Ginger (Mirren). The Nutcracker and the Four Realms also nabbed one of the world’s greatest ballerinas, Misty Copeland, who appears in an homage to the ballet adapted by Pyotr Ilyich Tchaikovsky.

Now here’s your Disney-approved synopsis to The Nutcracker and The Four Realms:

All Clara (Mackenzie Foy) wants is a key – a one-of-a-kind key that will unlock a box that holds a priceless gift. A golden thread, presented to her at godfather Drosselmeyer’s (Morgan Freeman) annual holiday party, leads her to the coveted key—which promptly disappears into a strange and mysterious parallel world. It’s there that Clara encounters a soldier named Phillip (Jayden Fowora-Knight), a gang of mice and the regents who preside over three Realms: Land of Snowflakes, Land of Flowers and Land of Sweets. Clara and Phillip must brave the ominous Fourth Realm, home to the tyrant Mother Ginger (Helen Mirren), to retrieve Clara’s key and hopefully return harmony to the unstable world.

The Nutcracker and the Four Realms opens in theaters on November 2, 2018.

Featured image: Mackenzie Foy is Clara and Keira Knightley is the Sugar Plum Fairy in Disney’s THE NUTCRACKER AND THE FOUR REALMS. Courtesy Walt Disney Studios.