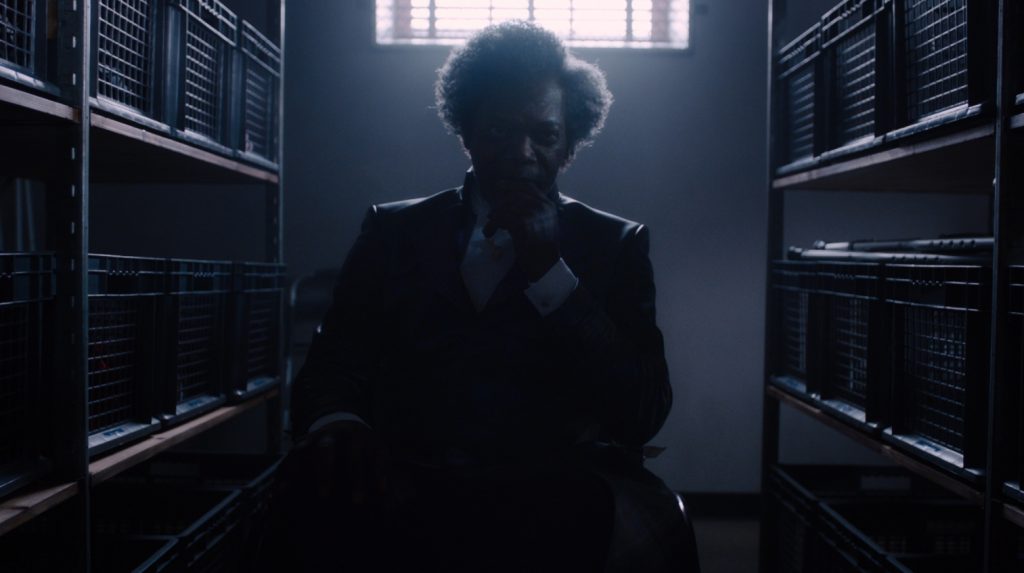 “Elijah’s changed over the years. He’s given up.” These are the first words we hear in the new Glass trailer, and we’d be wise not to believe them. While Glass opens with Elijah Price (Samuel L. Jackson) locked up in an asylum and heavily sedated (Sarah Paulson’s Dr. Ellie Staple keeps Price dulled on drugs), we know that Price, also known as Mr. Glass, is only just getting started. Soon he has “two new friends” in the asylum with him; his former antagonist, the Unbreakable David Dunn (Bruce Willis), and Split‘s Kevin Wendell Crumb, whose alter ego the Beast is perhaps the very weapon Mr. Glass has been waiting for. But you don’t have to take our word for it; check out the smile on Mr. Glass’s face when he sees who his two new asylum patients are (at the 0: 25-second mark).

Glass marks the final installment in M. Night Shyamalan’s surprise trilogy, bringing the characters from Unbreakable and Split together in a clash of good versus evil. According to Dr. Staple, Elijah Price, David Dunn, and Kevin Wendell Crumb are all delusional about their abilities. “The three of you think you have extraordinary gifts, like something out of a comic book.” She’s determined to cure them of their delusions and has developed a treatment for their disorder. Her treatment doesn’t go to plan.

Price taps into his mastermind villain persona of Mr. Glass and uses Staple’s treatment (which looks a lot like torture) against her in an attempt to spring all three of them out of the asylum. As always, Glass wants to prove to the world that people with superhuman abilities exist, and he doesn’t care how many people have to die for him to prove it. In the Beast, Mr. Glass tells David that he’s found someone that “will require your full attention.”

The new trailer has our full attention.

Here’s the official synopsis for Glass:

M. Night Shyamalan brings together the narratives of two of his standout originals—2000’s Unbreakable, from Touchstone, and 2016’s Split, from Universal—in one explosive, all-new comic-book thriller: Glass.

From Unbreakable, Bruce Willis returns as David Dunn as does Samuel L. Jackson as Elijah Price, known also by his pseudonym Mr. Glass.  Joining from Split are James McAvoy, reprising his role as Kevin Wendell Crumb and the multiple identities who reside within, and Anya Taylor-Joy as Casey Cooke, the only captive to survive an encounter with The Beast.