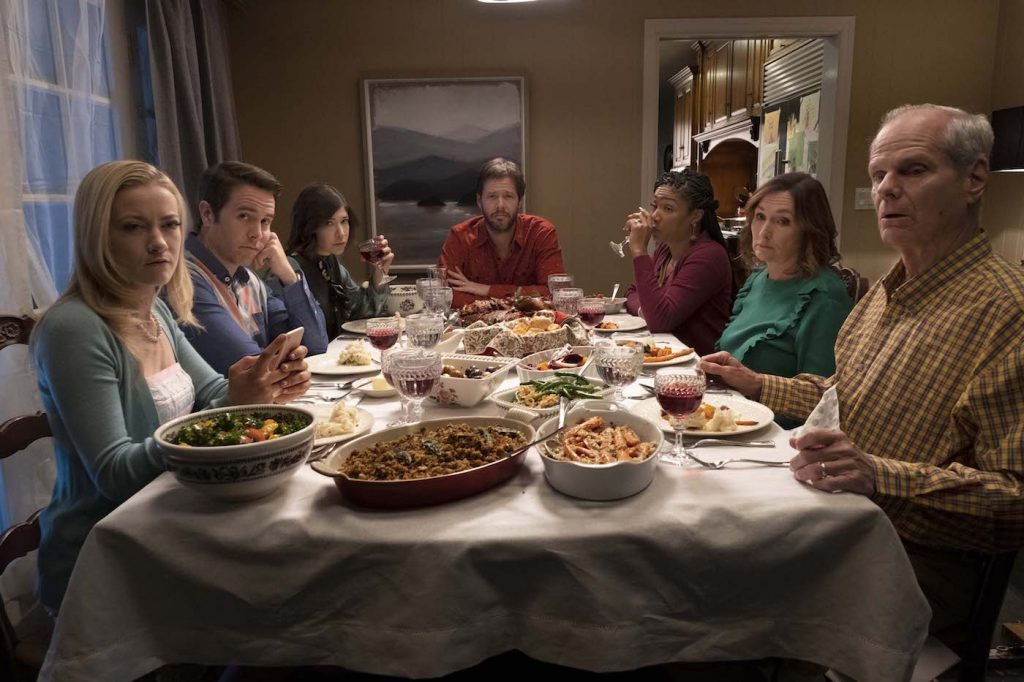 Ike Barinholtz on his Funny/Terrifying Directorial Debut The Oath

In a future that seems as if it could arrive tomorrow, American citizens are instructed to pledge their loyalty not to their country, but to the president. That’s the premise of The Oath, the first feature directed by Ike Barinholtz. The comic actor, known from such series as madTV and The Mindy Project, also wrote the satire, which begins as a family gathers for Thanksgiving dinner.

Barinholtz plays the host, Chris, and Tiffany Haddish is his wife, Kai. The cast also includes Nora Dunn as Chris’s mother; Jon Barinholtz as his brother and Meredith Hagner as the brother’s girlfriend; Carrie Brownstein as Chris’s sister; and John Cho and Billy Magnussen as government agents who knock on the door as the movie shifts gears from domestic comedy to bloody farce.

Barinholtz recently visited Washington to discuss his movie, which opens Oct. 12 in New York, Los Angeles and the nation’s capital. His interview with The Credits, which has been edited for length and clarity, began with the genesis of the movie’s scenario.

“This is a direct byproduct of the 2106 election,” Barinholtz said. “A few weeks afterward, after dinner at Thanksgiving — a little bit of whiskey going around — my mom and my brother and I got in this big argument about the election. We were, like, blaming each other. And we all voted for the same person! We were all on the same side and we were yelling at each other! I thought, ‘If this happening here, what’s happening at other tables around the country?’

I knew that the holiday table in America was forever changed. I thought, ‘If I can make a movie that’s in that house that week, and fold in this looming government crisis to make everyone crazier, we could get some laughs. And get some scares.'”

It’s not a spoiler since it’s in the trailer: The movie turns violent. Was that always your intention?

Yes. There are some movies that kind of activated me for this. Mrs. Miniver, with Greer Garson. I saw it when I was young and rewatched it. What I loved about it, besides Greer Garson, was how the movie tricks you. The first half is life in this pastoral English village. Even though there’s the war, everything is good. Very quickly it becomes — The Nazis! In the house!

It was also important to me that the movie is reflective of 2018. And 2018 to me is: You go on Twitter, you see a funny video of a guy’s pants falling down and you laugh. Then the next video is something horrific that makes you cry. This emotional rollercoaster. I knew if we made it a pure comedy, people could make the fair complaint, “You didn’t give enough gravity to these serious situations.” And if it was a serious thriller/drama, they’d say, “There’s not enough humanity in it.” We knew it was going to be a balancing act.

Your brother, Jon Barinholtz, plays your brother. Did you see this as a great opportunity to call him a moron in public?

[laughs] Literally, yes. I knew the central story was me and my wife, but that the big combatants were going to be me and my brother. Right away I thought, “I have to cast John.” I knew he had the chops. He went through the Steppenwolf conservatory and did these great plays. But also, there were lots of actors I could cast, but none that I have 35 years of fighting with. There’s no other actor that I threw a bag of change at, and gave him a black eye, in 1989. [laughs] And then said I didn’t do it.

There’s no one you love, and no one you hate, like your sibling. You can push each other. My mom saw the movie and she said, “There were scenes where you were really being mean to him.” I know! And there are scenes where he’s [cheesing] me off. From the first scene, where he shows up, his energy was just perfect.

You mentioned Steppenwolf, the theater company in Chicago, where you grew up. Is there something of Chicago in this movie?

I think Chicagoans — I’m going to say more than anyone in the country — have an ability to make fun of themselves. I think that is the key to satire. And my character is a blown-up version of myself. He’s a diehard liberal who exhibits a lot of bad behavior. The bad version of this movie is one where my character is the most liberal, and he’s a noble guy who’s in great shape. That rings false to me. I think that kind of Chicago mentality of “give yourself the most [crap]” runs through the movie’s DNA.

Also, Nora Dunn literally lives in Chicago, and she has a great Chicago accent. And looks like my mom.

Did you think this was a good kind of film for your feature directing debut?

I had directed some episodes of The Mindy Project, and I knew I wanted to do a feature. For my first feature, I wanted to direct something that was small in scope but big in stature. When I had this idea, I was like, “I know I can do a movie about a family fighting at Thanksgiving.” There was never a moment when I thought, “Maybe someone else should do this.”

Would it have been easier or harder to do it if you hadn’t been in it?

Logistically, it would have been a little easier. But I would have been frustrated. Because it is a specific character. To me, it was a great opportunity. When you’re just an actor, you have all these filters. You have the filter of writer’s words, and the filter of the director’s direction and the editor’s cut. The appealing part was getting rid of all those. It was me, saying what I want the way I want it, and showing it to you the way I think it should look. It’s something I want to do again.

It’s a small movie, but you use a lot of techniques to bring the world into the house.

That was the challenge. It’s easy to write a movie in one location. To make sure the audience doesn’t get bored is harder. My theory was to let the physical look of the film mirror the journey. For the first half of the movie, we’ve got wide frames, the colors are vibrant and people are entering and exiting. By the end, we’re very tight, and the colors take on this dark orange feel. We really wanted to make the audience feel like the walls are closing in on them, and really bad things are about to happen.

How did the cast come together?

There are some people that I wrote the parts specifically for. Tiff Haddish I saw in a movie called Keanu a few years ago, and I was blown away by her toughness and authenticity. I always knew I wanted to be a husband to her in a movie. And I knew my brother could be my brother. And I wanted John Cho because Billy Magnussen’s character is so scary and unlikable, I needed the most likable person next to him. Whenever I see John somewhere, he’s so calming.

I did not expect to get all of them. I’m so grateful that I did. Everyone signed on, either because they hadn’t seen this movie before, or they had never played this character before. Meredith Hagner always plays sweet ditzes, and I had her play an Ann Coulter clone. And Tiffany always plays the big boss, so it was great to have her play this internalized wife who’s quietly suffering because her husband is driving her crazy.

I’ve interviewed Carrie Brownstein in her other life.

Did you know about that when you cast her?

Yeah! My wife and I are Sleater-Kinney fans. I always thought she was a cool musician. I really fell in love with her when I saw Portlandia. I also thought we looked alike, a little bit. She was someone that I really did not think I was going to get. When she said she’d do it, I couldn’t believe it.

In early reviews, several critics have compared your movie to The Purge.

I think of it as the prequel to the prequel to The Purge. Two years before they decided, “Maybe we should kill each other for a day,” they were like, “Should we try an oath first?” I welcome that comparison a little bit. There is that dystopic element. It’s not really dystopic anymore. It’s almost reality. One of the movies that inspired this was Children of Men, which I love. When I watch one of those movies, I ask, “What was the genesis? Where did it all start?”

I have to ask you about the poster for what appears to be an obscure Polish film, Swietokrzyskie Voivodeship, on the wall in Chris and Kai’s house.

We created it. I told my production designer, Tom Lisowski, that I wanted us to be this perfect progressive couple. We traveled the world together and we went to a film festival in Poland. And we bought the poster. He really gave us nice little touches. There’s a McGovern poster in one scene, and I have a Geraldine Ferraro book.

You frequently see movies in which someone puts an art-film poster on the wall. Look how cool I am! But you’re part of a couple that’s so cool they have posters for movies that have never been made.