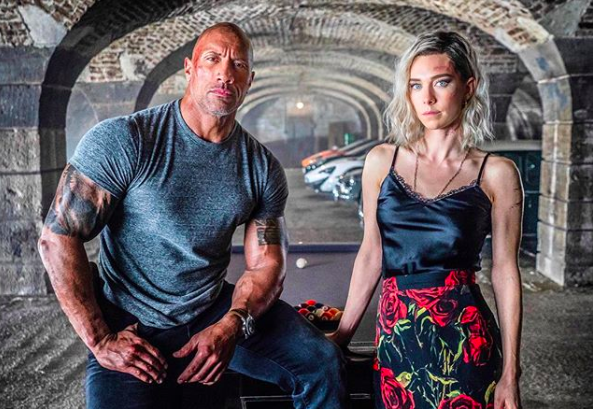 Vanessa Kirby nearly walked away with Mission: Impossible – Fallout. Her character—the White Widow—was delightfully dangerous, and Kirby seemed to revel in the Widow’s unpredictability. Having become a star as Princess Margaret on Netflix’s glorious period piece The Crown, Kirby’s been locking down some big films with some big stars, and while they don’t come much bigger than Tom Cruise, her latest onscreen partner gets as close as anybody possibly could; Dwayne Johnson. The Rock has introduced Kirby to his Hobbs & Shaw film, a spinoff from the Fast & Furious series in which his US Diplomatic Security Agent Luke Hobbs teams up with his best frenemy, Jason Statham’s Deckward Shaw, in a new adventure from Atomic Blonde and Deadpool 2 director David Leitch.

Kirby is playing Hattie Shaw, Deckard’s sister, and we’re guessing she shares some lethal abilities with her brother.

Building out our Fast & Furious franchise step by step. In our spin-off, HOBBS & SHAW, I have a nice new friend. Meet “Hattie Shaw” played by my homegirl, @vanessa__kirby. Hattie loves the following/ Longs walks on the beach. Being a bad ass MI6 Operative. Drinking tequila with Hobbs. And not in that order. Hattie also happens to be the sister of Deckard Shaw, who’s played by @jasonstatham. It tortures him that his sister Hattie is kickin’ it with Hobbs. His pain ? makes me very happy. But what makes me happier is welcoming this crazy talented actress and cool chick to our movie. Havin’ a blast together. Building out the franchise step by step. #HattieShaw #MI6BadAss #TequilaDrinkerWithHobbs HOBBS & SHAW ?

Kirby can no doubt sell playing the MI6 operative Hattie Shaw considering she was something of a double (or triple) agent in Fallout. Her casting is great news, as Hobbs & Shaw now seems to be building one of the better ensembles in recent action film history, including Idris Elba as the film’s heavy.

This is the first spinoff from The Furious franchise, with a script by longtime Furious scribe Chris Morgan.