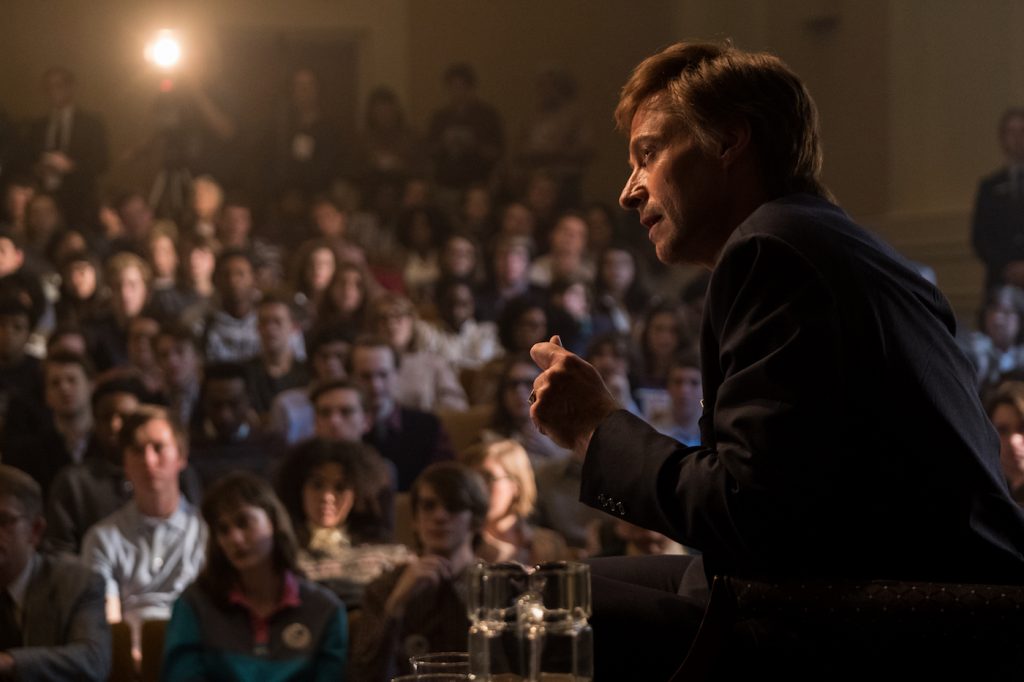 Jason Reitman’s The Front Runner centers on Gary Hart (Hugh Jackman)’s doomed 1988 presidential campaign, undone by the candidate’s extramarital affairs and a media landscape shifting beneath his feet. The film plunges you into the fevered weeks when Hart’s campaign unravels, seemingly hour by hour, as the talented senator refuses to face the reality of his actions and his staff is left scrambling to play defense.

You’ll likely be too caught up in the drama (and marveling at a time when a politicians’ infidelities were career-enders) to notice just what composer Rob Simonsen‘s score is doing, but you’ll certainly feel it. Simonsen created much of the music on his own upright piano, and he’s built a soulful sound around Hart’s implosion, with its jazzy inflections and improvisations expertly capturing the story of a man unraveling.

I got a chance to speak to Simonsen after The Front Runner bowed at the Toronto International Film Festival, where we talked influences, working with Jason Reitman and how not to push an audience with your score into how they should feel.

You’ve worked with Jason Reitman before, on Tully. Tell me about your collaborative process.

Tully had been temped with a fair amount of my scores, so he reached out, I wrote some stuff for him, and it turned out that he really liked it. That process went really great. And then when he was editing on The Front Runner, we started chatting, and I saw some scenes from the film. I thought it was really exciting, and felt like he was pushing into new territory cinematically. He had some very clear ideas about what he wanted for the music. A lot of it was referencing old piano jazz, like Dave Brubeck, and unbeknownst to him, I’d studied jazz in college. Bill Evans was one of my heroes, so that fit into the world. He didn’t want anything to sound past the 70s. He didn’t want an 80s vibe, even though it takes place n the 80s. We really tried to be mindful to keep a vintage sound.

The tension starts fairly early on and only ratchets up from there. What was your approach instrumentally to capturing Hart’s unraveling campaign?

We played around with some percussion, trying some things that were from a drum kit and interesting instruments that drummers might play. We wanted to have them do very improvisational passes, and find little moments and use those as the basis for cues. That’s half the score, just percussion, two drummers. The other half is mostly solo piano. The only thing that’s added is another layer of piano or a layer of percussion—timpani or bass drum. We kept it really focused. My approach was to reference from a production standpoint and feel standpoint those recordings of Dave Brubeck and Bill Evans, the world of solo pianists that were in the jazz scene. But not do a score that was jazz, but came from that world.

And it’s just you playing?

It’s just myself; I’m performing all the piano on the upright in my studio. A lot of it was about the mics and pre-amps and listening to the piano recordings and trying to do something that had that spirit and feel and hopefully being modern in its musical approach. A lot of repetitive, driving patterns with some overlaid chords that maybe bleed over into jazz, but never so much that it’s a jazz score.

What film references were you and Jason working with? There’s obviously a rich vein of political drama to tap into…

Jason referenced The Conversation a lot, another score that I love. We had some clear ideas. Then I went away and sketched up a few things, and gave it to him. Percussion things and solo piano stuff. Then he cut them into the film, and they stayed until the end.

So you weren’t you scoring to picture?

Often Jason loves to place music where he’s feeling it, which is totally fine with me. So I wrote sketches after seeing the film and reading the script, but I wasn’t necessarily working to picture, but I had the picture to reference to see how the piece was playing to the film in general. Jason wanted things to have a handmade feel. So I wrote a bit away from picture. We were very clear about having things not feel too deliberate. There were some things he cut in, and other things I did score that ended up that way, and other times I scored a scene, and he wouldn’t like it for that scene, but he loved it for another scene. That’s the process with Jason. I really trust him musically. When you have that trust, I never felt hesitant to give him material and let him do what he wanted with it. Sometimes he’d come back and ask to figure out a transition, or this is too dark, so we’d still sculpt things, but it’s unique with him.

I take it this isn’t your usual process with directors?

Each director has a different way of doing it. Sometimes I’m scoring a scene from beginning to end and trying to hit all these things and trying to help them achieve what they’re trying to accomplish in the specific scene. With Jason, I always know when I send something to him it might show up in a spot that I’d never think to put it in. It’s nice because I’m just generating pieces for the film, we’re specific about the tone we’re trying to hit. He’s very musical, so he understands instruments and plays a bit of piano so that we can speak in musical terms. When I send stuff, I know sixty percent of the time he’ll take it away from the scene I scored it for and take it somewhere else.

There’s a wonderful feel to the music that seems to match the drama perfectly, this sense of things being kind of messy, of everyone scrambling to try and stay ahead of this unfolding disaster. Was that what you were going for?

Jason likes things that sound surprising, but with this, he had such a clear sense of having things not sound deliberate. There were times I’d work for hours recording a performance that I did super rough, the first pass, and I was saying, ‘Let me re-record it, I can do better! But he never liked the better version, he always liked the one with the inherent flaws in it. Doing it that way, where your hand moves and you might in a moment take in a different direction…the first time you do that, there can be this electricity to it that you can’t recapture when you try to replicate it deliberately. Most of the things that were successful came from that, letting yourself be free. It was important to have tension but never tip over into being prescriptive about how to feel about what’s happening.

One of the real pleasures of the movie is how you don’t really quite know how to feel about Gary Hart. He’s clearly an intelligent, passionate politician, but he’s a bit of an enigma, too. Did you feel that way when you were sitting down to write the music?

We had this cue that dipped into a little bit of sadness, the temp cue he was using was an old jazz piece that had this sadness, a little bluesy jazz piece, and that was one of the things that for me killed the tension. The thing I loved so much about the film is you’re just watching these things unfold. The experience hopefully is you’re excited to watch it unfold, and if you ever color how the filmmakers want you to feel about something, it kind of falls apart. I think Jason did a really masterful job of holding an objective point of view. Musically we had to this as well. It was always about keeping the tension going, without sounding like we were making tension music, or overly heroic or thematic or villainous or bad…that’s a tricky prospect. It did take some time. And some sketches didn’t work. It’s harder to do something that has this narrow thread without falling too hard into being prescriptive. I loved that challenge.

Simonsen is also a founder and artistic director of The Echo Society, a Los Angeles based collective of composers who write original pieces for a one-night-only experience.