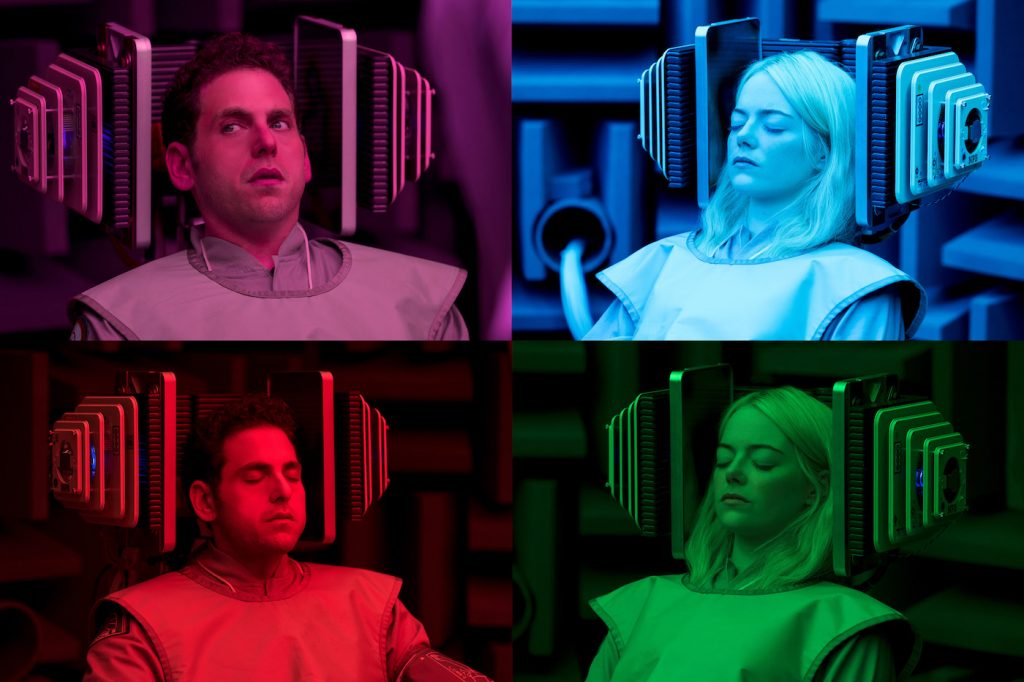 The first trailer for Netflix’s Maniac, starring Emma Stone and Jonah Hill, is here, and it’s easy to see why folks have been so excited for the new series. The limited series comes from writer/director Cary Joji Fukunaga (True Detective, Beasts of No Nation), and marries his singular talent to a corkscrewing sci-fi concept with a sensational cast. Maniac concerns Stone’s Annie Landsberg and Hill’s Owen Milgrim, two strangers besieged by personal and mental problems, who lives intersect when they submit themselves to a fantastically creepy pharmaceutical trial gone awry.

“Once you begin to appreciate the structure of the mind, there’s no reason to believe that anything about us can’t be changed,” says Justin Theroux’s James Mantleray to his research subjects (or captives? The trailer leaves that distinction somewhat ambiguous), who have all willingly come to the trial for their own reasons. What each of the ten subjects wants, in one form or another, is to be fixed. Mantleray’s promising them a series of pills which will essentially cure them of their various troubles—mental illness, relationship problems, ennui and more. Once the trial begins, however, the subjects realize there is way more going on here than mere pharmacology. “This is some multi-reality brain magic sh*t,” Stone’s Annie says in the middle of this truly intriguing, bonkers trailer. The supporting cast is fantastic, which along with The Leftovers’ Theroux (check out his fantastic hair), includes Sally Field, Gabriel Byrne, Billy Magnussen, and Sonoya Mizuno.

Set in a world somewhat like our world, in a time quite similar to our time, Maniac tells the stories of Annie Landsberg (Emma Stone) and Owen Milgrim (Jonah Hill), two strangers drawn to the late stages of a mysterious pharmaceutical trial, each for their own reasons. Annie’s disaffected and aimless, fixated on broken relationships with her mother and her sister; Owen, the fifth son of wealthy New York industrialists, has struggled his whole life with a disputed diagnosis of schizophrenia. Neither of their lives have turned out quite right, and the promise of a new, radical kind of pharmaceutical treatment—a sequence of pills its inventor, Dr. James K. Mantleray (Justin Theroux), claims can repair anything about the mind, be it mental illness or heartbreak—draws them and ten other strangers to the facilities of Neberdine Pharmaceutical and Biotech for a three-day drug trial that will, they’re assured, with no complications or side-effects whatsoever, solve all of their problems, permanently.

What’s that they say about things that sound too good to be true? Maniac‘s intriguing premise and top notch cast and crew have us eager to take part in this trial.