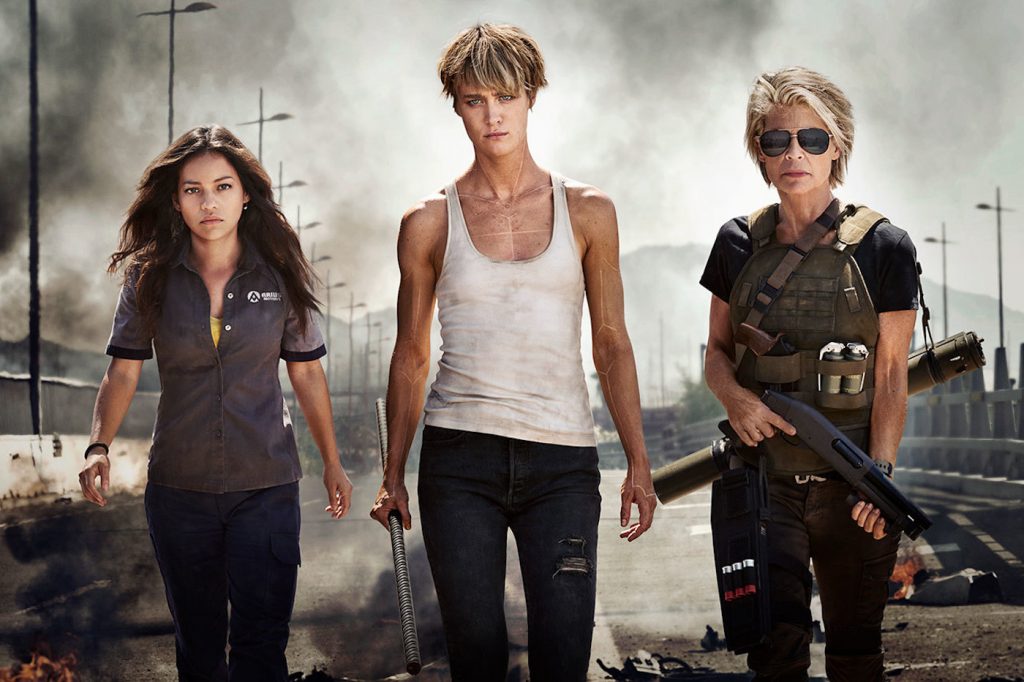 Women Take Charge in Our First Look at Terminator 6

Paramount Pictures and Skydance Productions are ready to terminate one more time. They’ve just revealed the first official Terminator 6 photo, and we can already decipher a lot. We finally get a clear image of the film’s three lead characters, the glorious return of Sarah Connor (Linda Hamilton) and the two new characters, Grace (Mackenzie Davis) and Dani Ramos (Natalia Reyes). Another exciting tidbit is the return of the franchise’s iconic title villain/hero (depending upon whether you’re recalling the original film or the epic sequel, T2) Arnold Schwarzenegger. Terminator 6 is shaping up to be a reunion—James Cameron is back as a producer, with Deadpool’s director, Tim Miller, behind the camera. What a team!

Cameron’s return as producer is significant. Terminator 6 is meant to serve as a direct follow-up to his game-changing Terminator 2: Judgment Day. So forget what you know from the franchise’s most recent film, Terminator Genisys, because this film will pick back up to when Sarah is still alive and well in present-day. Other alternate timelines may even be involved, so the future of this film is still pretty hazy.

In a phone call interview with Business Insider, Schwarzenegger said: “I think [James] Cameron and [upcoming Terminator movie director] Tim [Miller] came up with a concept where they can continue on with the T-800, but make the movie a whole new movie. What they are doing now with this one is basically to just take a few very basic characters, like Linda Hamilton’s character and my character, and dismiss everything else. Just move away from all these rules of the timeline and the other characters.”

From the featured image, we can assume that Terminator 6 will be led by the women, and that this intense trio is ready for battle. We can see Grace’s ornamental scars, Sarah’s suited armor, and Dani rocking a mechanic’s shirt. It looks like these women are ready to roll.

Although the synopsis for this film is still unclear, its been reported that Terminator 6 follows Sarah Connor and Schwarzenegger’s T-800 as they attempt to protect Dani, a young Mexican woman. Terminator (Gabriel Luna) from the future haunts Dani, so it is up to Sarah and her trusty T-800 to save her. Grace will play a post-apocalyptic character and will aid Sarah and Dani on their mission. As for the rest of the film, we’re unsure of what is to come, but we’ve got hope this franchise is back on track.