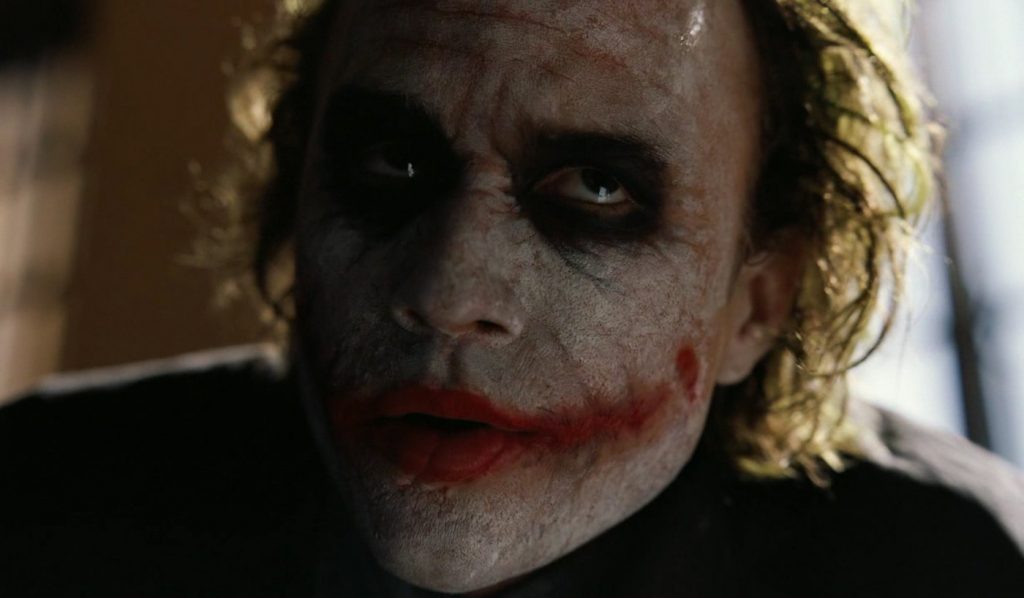 Now is the perfect time to once again celebrate Heath Ledger‘s iconic turn as the Joker in Christopher Nolan’s The Dark Knight. With Nolan’s masterpiece heading back to the big screen to celebrate the film’s 10th anniversary, CineFix caught up with the film’s Oscar-nominated makeup artist John Caglione Jr. in a fantastic video that explains Ledger’s transformation.

Caglione Jr. had previously been nominated for an Oscar for his work for Warren Beatty’s Dick Tracy in 1990, but he quickly understood that his makeup design for Nolan’s film, especially on the Joker, would be a very different beast. Once he read the script, he knew that Ledger’s Joker would require a “more organic looking thing…it became a more realistic approach to the makeup,” he explains in the video. He began to wonder what a man who rarely changed his clothes and rarely washed off his makeup would look like, a “real psychopath.”

The makeup team, led by Caglione J.r, got to work with Ledger, Nolan, and costume designer Lindy Hemming. Caglione Jr. created different sketches of Ledger as the Joker with various kinds of clown makeup, different kinds of hair (including green, his comic book hair color), his various facial scars and more. These designs all showed Caglione Jr.’s considerable expertise, with clean lines. Next they did makeup tests with Ledger in London, at which point Caglione Jr. realized that his initial instincts that this was a different kind of superhero movie, and this a different kind of super villain, were right. He’d have to abandon much of what he’d learned and perfected over the years. This Joker was anathema to order, to clean lines or clean anything. The Joker’s makeup, like his mantra, had to be about chaos. So Caglione Jr. had to forget about what he’d learned and help create a messy, scary, blurry kind of look. In the end, he became a part of a game changing film and arguably the most iconic performance by any actor in any superhero film, ever.

“This had to look very broken down, very lived in, so my first attempts were too perfect, so I had to let my hand go,” Caglione Jr. says. What he had to get used to was imperfection. Ledger’s Joker was not like Jokers of the past (including Jack Nicholson’s legendary performance in Tim Burton’s 1989 Batman.) Ledger’s makeup was not precise, and that was by design. In Burton’s Batman, the Joker’s face is the result of a hideous accident. In Nolan’s The Dark Knight, the Joker’s makeup is self applied. As for his scars, Ledger’s Joker keeps changing his story on how he got them. Did his dad really do it? Are these scars self created? In the end, we never find out, but what we do know is the Joker’s a lunatic who smears clown paint on his face to frighten people—that’s the look this Joker needed, and ultimately it’s the look that Caglione Jr was able to create. The makeup helped bring Ledger’s spin on the Joker to life, and in turn to paint the portrait of one cinema’s greatest villains.