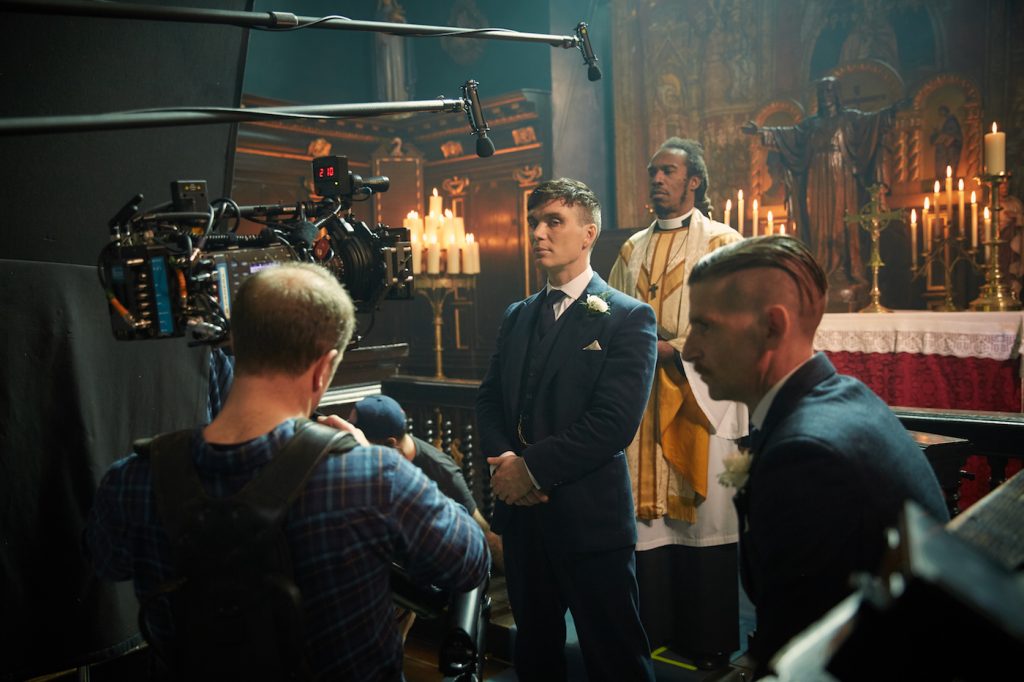 Peaky Blinders beat The Crown in May to win England’s BAFTA Award for best television drama, but series creator Steven Knight won’t be shocked if his show fails to snag American kudos when Emmy nominations are announced Thursday. “Peaky Blinders doesn’t do the things that other shows do,” he says. “It took a long time to get our first BAFTA but audiences in Europe and America are loving Peaky. Even though it has taken awhile, I do think the people who give out awards will catch up.”

Like The Crown, Peaky Blinders is a beautifully shot, meticulously costumed period drama about a dysfunctional family fueled with spellbinding dialogue performed by top-rank British actors. Unlike The Crown, Netflix series Peaky Blinders filters history through the profane experiences of a violent clan that ranks with the Sopranos as one of television’s most charismatic band of miscreants. Set in Northern England in the 1920’s, the show casts Cillian Murphy as brilliant Birmingham criminal Tommy Shelby. Aided by his hot-headed brother Arthur (Paul Anderson) and gypsy Aunt Polly (Helen McCrory), working class Tommy out-smarts everyone around him during his brutal ascent to respectability.

Wright draws directly from family lore to inform the series’ gritty details. As a child he worked for a bookie, and his great uncle belonged to the real-life Peaky Blinders gang, so called because members concealed enemy-blinding razors inside the brims of their peaked caps. “I mistrust written history whereever possible,” says Wright, speaking from his London home. “Instead, I’ve used stories that my parents and uncles and grandparents told me. When you’re getting first hand accounts, you realize the past is a mess. It’s chaos.” As backdrop for Peaky Blinders, Knight says, “I see the twenties as this period where everybody’s metaphorically or actually getting drunk. There was a real shock to the culture, seeing how technology tore people to pieces during the first World War. ”

Though he’s a prolific writer of movies (Dirty Pretty Things, Eastern Promises, the upcoming Anne Hathaway thriller Serenity) Knight keeps returning to the luxury of long-form storytelling offered by Peaky Blinders. “Increasingly I feel that a cinema movie is a short story and a television series is a novel,” he says. “With Peaky Blinders, it’s a gift to have all this time to take characters through a journey where you and the audience really get to know them.”

The Peaky Blinders saga continues to feel fresh four seasons into its run because Knight, who writes every episode himself, continues to challenge his earthily eloquent characters with novel adversaries. “The way Peaky works is, I put the characters in the room and let them talk to each other,” Wright says “I try to make the dialogue more poetic than might be allowed if you had a script editor or studio executives looking at stuff because I’m a great believer that there really is poetry in the way people speak. So I try to heighten all of that as much as possible, and then I introduce these irritants.”

In Season Four, the “irritants” include corrupt Russian émigrés, a sexy Communist who falls for Tommy while trying to organize workers at the factory he owns, and most formidably, a Mafia hit squad hell-bent on revenge.  “Tommy shot someone in season three and now it comes back to haunt him terribly and dominate his life,” says Knight, who also burdens his hero with a unshakeable case of PTSD caused by his wartime experiences. “The nihilism and despair that followed the first World War is expressed in Tommy and Arthur’s behavior, how much they drink, how they treat other people. I always imagined before season one started that Tommy put a gun to his head and asked himself, ‘Shall I end it or should I do everything?’ Then he put the gun away and decided to just go, no consequences, no risk because the worst has already happened. So Tommy Shelby wants wants power, he wants experience, he wants pleasure, but there’s this tastelessness to every pleasure, so he just tries harder and harder and harder.”

Peaky Blinders’ fifth season, which begins filming in September, follows Tommy Shelby to Parliament in the early 1930s, when he’s forced to contend with the rise of British fascist Oswald Mosley. “I’m putting Tommy Shelby in conflict with people who set themselves up as leaders by attacking foreigners, attacking the ‘other.’” It’s an particularly resonant theme for a show that excels in mining historical fact for contemporary-feeling friction. Knight says, “People in the twenties and thirties had the same emotions, jealousy, hate, love, all the things we experience now. What I’m trying to do in Peaky Blinders is to deal with the big issues of history as we perceive them through the experience of a single person and his family.”