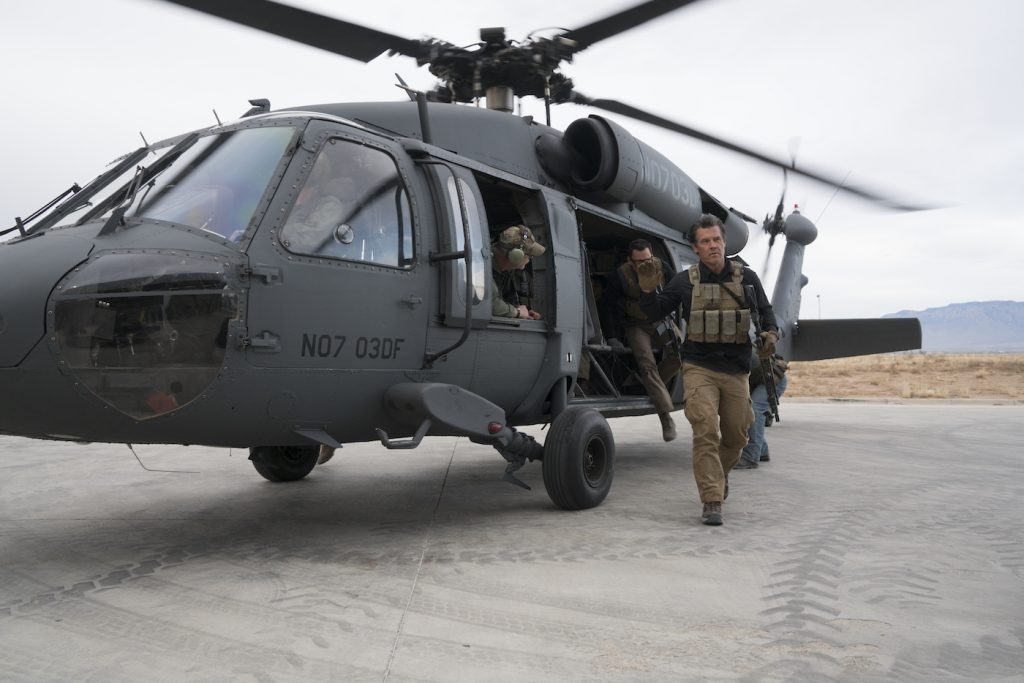 Icelandic musician Hildur Guðnadóttir was all over the first Sicario movie: She played the cello throughout the Oscar-nominated score written by her longtime collaborator Jóhann Jóhannsson. He died suddenly this winter. For the sequel Sicario: Day of the Soldado, Guðnadóttir scored the picture herself, but this time around, she cranked up the sense of menace by playing a one-of-a-kind instrument dubbed the “dorophone.” “It’s based on a cello, and basically this electro-acoustic feedback monster which has really become main instrument these days,” Hildur explains from her home in Berlin. “It’s kind of like a Jimi Hendrix cello, to put it into terms that make any sense. And that’s actually what you hear at the beginning of the film.”

Dispensing with melody early on in favor of sonorous slabs of single-note sustains, Guðnadóttir evokes a chilling sense of foreboding informed by the spare orchestrations of the first Sicario. “Johann ‘s  score was based on this very simple, low-string glissando motif repeated again and again,” she says. “We wanted to honor that simplicity in Day of the Soldado. Using the low strings felt like a good way to tie this film together with the first one but at the same time do something completely different.”

The score becomes more percussive when Josh Brolin’s Matt character leads a caravan of militarized vehicles into the Mexican desert on a mission that goes horribly haywire. “It was important to me that the percussion resonate with the sound design and the types of guns that were being shot,” Guðnadóttir says. To accompany the on screen carnage, she steered clear of conventional percussion instruments. Instead, she got together with two childhood friends in an Icelandic recording studios and started experimenting. “Me and the guys explored bits and pieces of anything that could possibly make sounds,” Guðnadóttir recalls. “We tried a lot of different recording techniques and basically just banged on anything that could possibly be interesting.” The trio hit pay dirt when they discovered that old school metal film canisters yielded a rich clanging sound. And then there were the pizza boxes. She says, “We ended up with a lot of strange and mysterious sounds.”

For her more melodic material, Guðnadóttir worked with members of a wind ensemble with whom she was well acquainted. “My aunt played oboe on the soundtrack and my father played clarinet,” she says. “My brother was part of my recording team too.  My oldest and best friends are all a part of the process. I have more fun recording with people I know and trust. If they didn’t raise me, then I probably grew up with them in one way or the other. I like working that way.”

To dramatize Day of the Soldado‘s relatively tender relationship that develops between between Alejandro (Benicio Del Toro) and 12-year old Isabela (Isbela Moner) when they’re stranded in the Mexican desert, Guðnadóttir conducted an orchestra in Budapest. “The first Sicario was very stripped down and didn’t have any real underscoring,” Guðnadóttir explains. “It was more about ‘statement cues.’ But this one, we follow the narrative much more closely, so when the relationship gets deeper between Benicio’s character and the girl, we use higher strings. The music’s meant to be more sentimental. It’s a very classic way of scoring.”

A cellist since childhood, Guðnadóttir often uses software to manipulate traditional instrumentation. In the case of teenaged “coyote” Miguel (Elijah Rodriguez), who sneaks immigrants over the U.S.-Mexican border, Guðnadóttir re-purposed the typically pleasant-sounding harp for her own purposes.  “Miguel didn’t have a theme as such but I wanted to find a sound for him that created an uncomfortable feeling,” Guðnadóttir says. “We tried a whole bunch of stuff but we ended up using a harp played with a bow, which was then processed. I like pulling something from the acoustic world and then taking it out of context.”