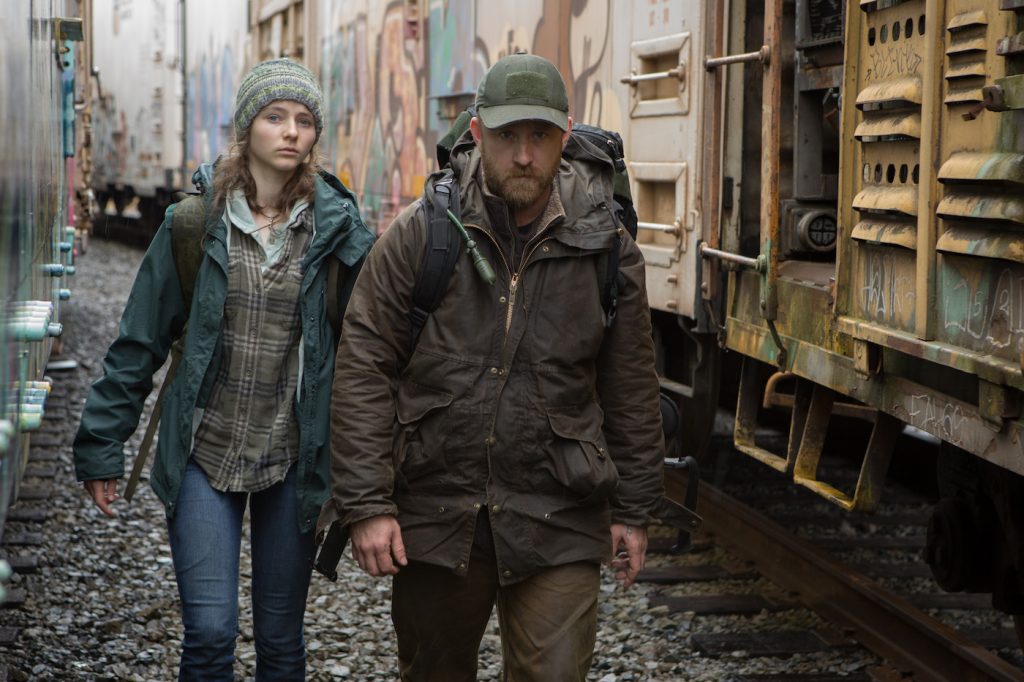 In Leave No Trace, Ben Foster plays a man who’s fled American society, carrying just a few things with him — most significantly his teenage daughter, Tom (Thomasin McKenzie). Foster’s Will is apparently a military veteran, but writer-director Debra Granik never tells his story. The character seems a bit like a post-traumatic version of the violent men Foster has played in such movies as Hell or High Water.

Foster is clearly proud of the starkly poignant film, Granik’s first feature since 2010’s Winter’s Bone, although he says he hasn’t seen it. His reluctance to watch himself on screen is among the many things he explained in a talk with The Credits. The interview, which has been edited for length and clarity, took place the day after a Washington screening attended by veterans. That prompted a question about Foster’s attraction to movies about war and its aftermath.

“The desert wars being my generation’s wars, the stories of the soldier in action, the returning soldier, reentry — those are stories that I am drawn to. They’re affecting my peers, my friends who served,” Foster says.

“On a side note, anyone who puts on a uniform, military or not, and serves people, is very moving to me.”

What else drew you to the film?

Fatherhood. When I read it, my wife and I had just found out that we were going to have a girl. These questions were there at home, and then they showed up in a script.

How did you help shape the movie?

I do like to work with people who appreciate collaborating. I do my own homework and like to share it. It doesn’t mean that it has to go in. But I do like the conversation.

In this case, I got hired and we had months to prep. It began with Debra and I sending each other articles, interviews, books. Experiences that we’ve both had. We put those together and then looked at the script again.

We were able to get rid of a lot of dialogue. We didn’t need to say so much. We felt that this would serve the role and the film more so than the extra backstory, extra exposition, the usual movie chat that haunts most people’s hour-and-half.

But you found ways to convey that information without stating it?

“Is it a want or is it a need?” Tom asks her father that. That was a beautiful line, and I asked Debra if we could look at the script through that filter. Anything that he needed to say would be said, and anything he wanted to say, but didn’t need to, would be erased. We got rid of a lot.

Did you think about what happens to your character after the story ends?

Yeah [sighs]. You know McCabe and Mrs. Miller? My dad showed that to me, and at the end of the film Warren Beatty’s in the snow. He’s been shot. I was very upset when I saw it. My father said, “No, no, it’s OK. He’s just resting.” So you think what you want to think about wherever they’re going.

I was struck by the sequence in the alternative trailer park where Will and Tom take refuge for a while. The warmth of it appealed to me.

Warmth is a nice word. One of the most successful throughlines in the material was Debra’s choice to celebrate subcultures and communities throughout. There is community to be found in places, and that generosity of spirit does exist in this country. That’s worth celebrating.

You’ve been in a number of movies where people shoot at each other. In this movie, there are no real adversaries.

The scars of war. A past. But nothing physical. There are no bullets flying in this one. There’s no bad guy. It’s unique what Debra pulled off.

Are you drawn to roles that are physical in some way?

Yeah. As long as this works [he slaps his thigh] I want to use it in some way. I do feel very much in this skin suit. And I do like to work with it.

The joy of the job is learning. Saying, “I don’t know about that. How does that work?” Working with people who know a lot about it, and are going to spend a little time trying to teach me.

And what do you learn making movies like this?

For this in particular I spent time with survivalists and nature appreciation teachers. How do you find resources where ordinarily I would just see a tree or a bush? Being able to recognize a certain kind of tree, certain kinds of branches so that, if I spent my time well, I could build a shelter in two hours. Recognizing where water might be. Or how to get food if I don’t have any.

That becomes a new language, and that’s really exciting. It feels like waking up. You walk into a forest. Before, it was trees. Now it’s resources. Which could save someone’s life if they’re in a bad spot.

Do you like that for the satisfaction of learning it, or because it affects the role?

Both. There’s a constant sense of there’s not enough time in this life. To read the books, to go to those places, to meet these people, to experience this very fleeting existence. When you start losing friends and family along the way — and we all do — that becomes more evident.

Making the movie? It’s interesting. But what buys me into it is learning.

So the movie is a byproduct of the learning process?

For sure. I don’t watch my own movies, generally. It’s nice to talk about the learning part of it, but the Hollywood part of it is not me or my family.

As an actor, not necessarily as a viewer, are you skeptical of green-screen CGI-heavy movies?

No. What I think of is being a caveman, and the flickering light on the cave wall, throwing shadows on the drawings of that which we aim to kill tomorrow, or that which we harvested last season. That’s a special effect, that light. I have no issue with that. A stick, as a kid, became a sword. This is just an advance of that.

There are pretensions, poor use or exceptional expression in any of the media. So knock yourself out with the green screen.

I would say, though, it does traditionally cost more money to do digital effects. And when there’s more money involved, the balance might shift away from honoring the artistic thrust of the piece, because people what to make their money back. Which I understand.

But if you’re working on a soundstage, it’s very different from immersing yourself in a forest.

It is, for sure. I don’t have to work so hard [chuckles]. But at the same time, I also do theater, so you’re looking out a wall of faces. You have to make your own internal green screen to erase them.

On this movie, did you do anything in particular to bond with your costar?

She’s a lovely human. Very much a part of the success of this film is a quality she has, rather than she’s performing. But she’s an actor for sure, and a damn fine one.

We did nature training together. Not traditional rehearsal. Just building things with our hands. Putting a shelter together. Learning how to identify certain kinds of mushrooms.

A shorthand was established fairly quickly. It’s not always like that.

When doing publicity for the movie, she was wearing a “Strong Female Character” T-shirt.

Yeah. They sent one for my kid, which was really sweet. Like a onesie. We’ve got a strong female character at home, too.