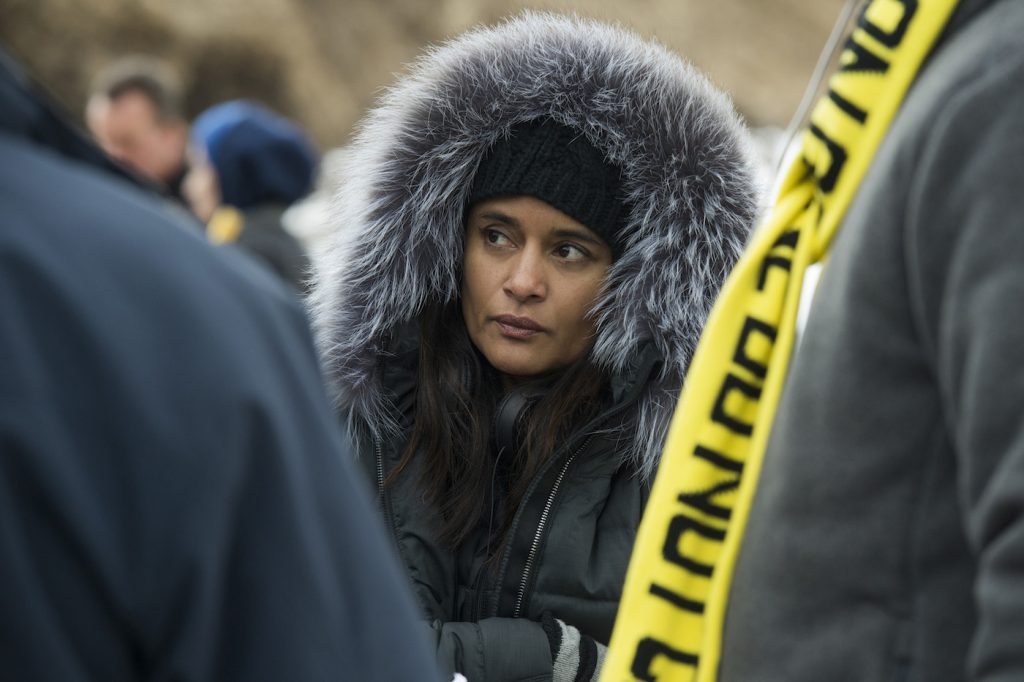 A young detective, frantic because he cannot reach his pregnant wife, is driving through the snow, trying to reach her on his cell. He hears a sickening thud, but does not realize what he has hit – who he has hit – until he gets out of the car and sees the mangled bike under his wheel. A black teenage boy named Brent Butler was riding that bik,e and the cop is white.

When his colleagues arrive, they tell him to leave. They say that if he tells the truth, it will make trouble for the whole department. And the story of Seven Seconds, now available on Netflix, begins, following the consequences for the detective and his department, the boy’s family and an exhausted prosecutor named KJ. Writer/director Veena Sud, who specializes in gritty crime dramas that address issues of race, class, gender, and politics, spoke about setting the story in the shadow of the Statue of Liberty and how the actors improvised one of the series’ most powerful scenes.

The Statue of Liberty is obviously an incredibly iconic image that I would see quite often when I lived in Jersey City years ago. Her back is turned to Jersey City, which I felt was incredibly symbolic and appropriate. It felt like the Statue of Liberty and everything that she represents — freedom and democracy and America’s highest aspirations — is not necessarily being shared with Jersey City. It is one of the most diverse cities in America, with a majority brown population and black population and immigrants. Despite the obvious implications of what the Statue of Liberty stands for, the immigrants in that city were not being given the amount of care and welcome as the immigrants across the ocean in Europe. So when I got a chance to create Seven Seconds I knew that I wanted that image of the Statue of Liberty with her back to Jersey City to be front and center and. What she represents with her back turned to the characters and to the world in the story is American freedom and the American promise and the American dream is limited to a few and not to everyone on its shores as is very clear from what happened to Brent Butler in the shadow of the statue.

I was especially impressed with the ensemble work of the actors in the series. Every one of them gave a great performance and, what is more rare, every one of them was entirely in support of the others, as though they had been acting together for years.

I feel really fortunate. Before shooting is I go out to lunch with them or dinner or drinks and we will just talk; what makes this person tick, what do they wake up to, how we created the character, what we were thinking about.  It’s just a blueprint at that point until the actor steps into the shoes of the character and there is some back and forth. Michael Mosley has an incredible sense of humor and he would suggest ad-libs. He’s so great and he’s so vulnerable and sweet and funny. Michael just breathes such beautiful life into the character.

When we were in pre-production we met with Gavin O’Connor who directed the pilot and I would meet separately with the actors and then bring them together and talk through kind of their relationships. So we were doing that with the Butler Family and I was really, really interested in how families kind of implode all the past kind of pains and resentments and deep, deep wounds kind of come to the surface in the face of a tragedy just because that’s really kind of what happens. I think it’s really important to talk in specificity about victims of violence on the screen because usually they’re just one-dimensional characters who are just crying and then they just go away, versus the real people and how their lives are upturned by violent acts done to them.

What was your process like working with the actors?

We were in this conference room talking about the characters, talking about the backstory that the writers and I had imagined for these characters and all of a sudden Russell Hornsby and Zachary Momoh just started ad-libbing and improvising and it became that thing that happens when families just take off the mask and take off the gloves and start going at it. And then Regina jumped in. It was incredible to just give a few things to actors and then see them run with it. We were just sitting there and listening and literally scribbling down their improvs and I ended up using dialogue in one of the episodes when it’s the aftermath of a big fight between Russell and Zachary and Zachary is telling him, “What do you have to complain about, man, you’re free?” and Russell says to him “Look around you — do I look free to you, boy?” That came from Russell. It was amazing; it was truly magical.

All our lives are so multifaceted. So it benefits the characters to give them as many facets that we all have as human beings. Again the actors are so key in holding on to that and making all those different truths about who they are consistent with the core of their being as we do in real life. So thematically we may be dealing with scenes but at the heart of it it’s really just about one person’s voyage; Seth [returning veteran and the uncle of the boy who was killed] coming back from the war bitter, broken with kind of a very different view of America coming into a situation of incredible loss, for example. So as long as the actor can really weave all those multiple stories in his character into a true kind of mosaic I feel like we’re really on solid ground.

The actors also would do research into their characters; Regina King met with a woman whose son had been murdered by the police and got to really do a deep, deep dive into that experience, Zachary Momoh, who plays Seth, spent time with soldiers coming back and really got to ask, “What are you feeling? What did you see there? What are you feeling now as black men in America who went overseas to fight for a country that is now killing your children?” So they did a ton of steeping and marinating themselves in these multiple-layer roles for their character.

And then with the directors — I love directors and we spent a lot of time together in pre-production. They get a lot of time on tone; we’re really, really detail-oriented in trying to give them as many tools as possible so that they can come on to set knowing everything that everyone has known before them and knowing the characters and knowing what is the visual aspiration of the show and the very, very specific design. And we had an incredible DP, Yaron Orbach, who was the visual key holder. He works really tightly hand-in-hand with the directors and gave ideas and suggestions because he knew from the very beginning, when he shot the pilot, what we were looking for, the type of visual story we were looking to tell.

How does working with Netflix affect your approach to the material?

I love the ability to not have a commercial break or a forced kind of going away from it. I love it because I think it makes storytelling really smart. We don’t have to refresh anyone’s memory and we don’t have to dumb anything down. It’s almost like a novel that you get to go from chapter and chapter kind of at your own pace what the reader can have the capacity to actually watch at any given time. For me as a writer it just allows me to tell the densest story I can, the most human story I can and trust that the reader/the watcher can just absorb at his or her own pace without any kind of artificial interveners like commercials or sitting around for another week to wait for the next episode. It really has changed the way we write. There are no cliffhangers necessary anymore at the end of episodes if one does not choose to do that. There is a very, very natural flow now I think between the hours of a series.  And there’s another incredible freedom to not be locked into too short of a time. It allows you to tell the story as it should be told versus some artificial idea of when it should end.

If families watch this together what do you want them to talk about afterward?

The desperate necessity for change. America is this country that is dealing with one of the biggest human rights abuses, so I want people who see this to talk about how we can all be part of change. For families I think that’s a great question because besides the activism that the show can inspire in people it’s the courage, too. We live in some pretty tough times right now, some pretty dark times. Be the one voice, be the KJ’s, speak the truth and do the right thing.