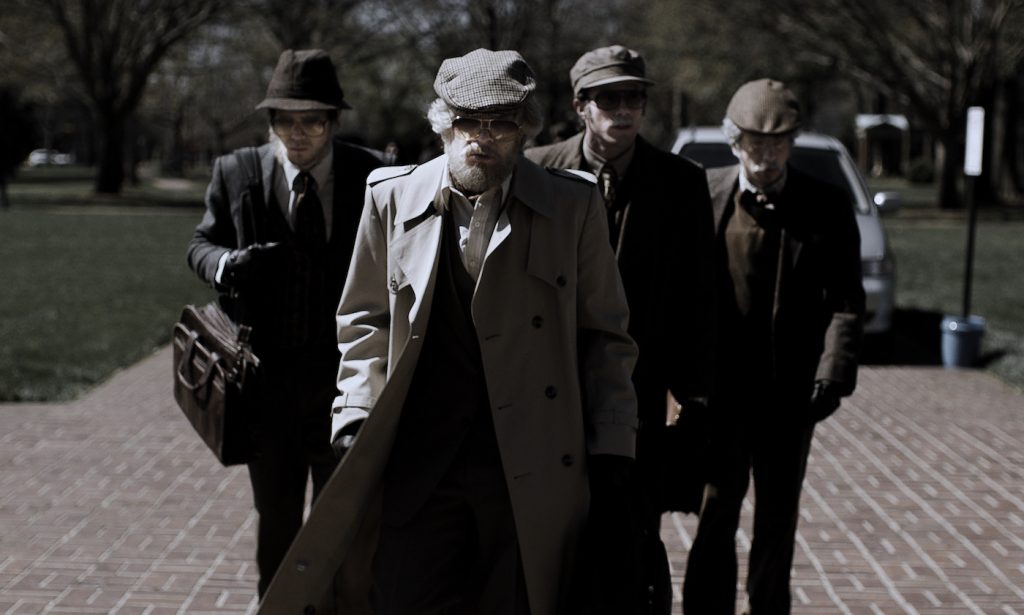 Writer/director Bart Layton has a long history of bringing true stories to the small screen. He created and produced the documentary series Locked Up Abroad and directed the television documentaries 16 for a Day and Becoming Alexander.

In 2012, he brought his unique skills to the big screen with the documentary The Imposter. The film earned critical acclaim and Layton won the BAFTA Film Award for Outstanding Debut by a British Writer, Director or Producer.

Layton’s new film American Animals offers a unique look at a true story as well. Unlike much of the auteur’s previous work though, this movie features a narrative story with actors taking on the main roles.

In the film, four college-aged men come together to steal a set of rare books from Transylvania University in Kentucky. The books included John James Audubon’s Birds of America and Charles Darwin’s On the Origin of Species, two volumes that could be sold on the black market for millions. The men ultimately attempt to steal the books after attacking the librarian on duty.

The movie features Evan Peters, Barry Keoghan, Blake Jenner and Jared Abrahamson as the wannabe criminals who plan to pull off the heist.

Many films that are based on true stories only feature their real-life subjects in the closing credits. This film is different. American Animals features interviews with its subjects interspersed throughout the story. As the story unfolds, Layton gives his subjects an authentic opportunity to share their own perspectives.

I recently had the opportunity to chat with Layton about including the real-life subjects in his film, the story’s contemporary relevance and the one person whose opinion of the film meant the most to him. Below is a slightly edited transcript of our conversation. American Animals is in theaters today, June 1.

When did you originally hear about this story?

I read about it in a magazine. If memory serves, I was returning from Sundance having screened The Imposter there and just found this very, very compelling and bizarre story. One of the most surprising aspects of it was that the crime was committed by a very unusual group of criminals: young men who were from privileged backgrounds. It just didn’t quite add up to me. The more I read about it, the more bizarre it became.

How did you originally get to know these men? You exchanged letters with them, right?

I worked with a young woman called Poppy Dixon, who was my co-producer on The Imposter, and we just reached out to them really with the intention of trying to kind of ask them why they did it [and] if they ever imagined they’d get away with it.

The lessons were surprising. The lessons were not what you would expect from a group of criminals. They were much more articulate and they talked about things that I was surprised to hear were their motivations. A lot of it was about this desire to be interesting. To lead a special life. The more I spoke to them, the more I felt it was quite a relevant story. Probably more relevant now than it was at the time because now we live in a culture where there’s more and more pressure to leave a mark on the world. There’s also a way of measuring how valuable you are in the world [by] how many people are following you on Instagram. That felt like it was very much tied to the film thematically so I wondered if there was a way to construct a really roller coaster kind of white-knuckle heist movie that talks about these other issues.

When did you decide to include the real life people in the film and what was their reaction to it?

That decision was made very early on. When I wrote the script, I wrote the real guys into the script and the film was always going to be this hybrid of fiction and non-fiction. It was an experiment I really needed to get out of my system. I really needed to know whether it could be done in this way and whether the effect would be what I suspected it would be: which would be that you’re emotionally engaged with them. The film would be heightened because you’re not allowed off into movie world where everything’s fake and the consequences don’t really matter. You’re in the story.

There also some moments in the film where it seems like the real criminals are genuinely reflecting on their actions. Did you always plan to have those moments of introspection here?

None of that was scripted. That was all stuff that just came out of the natural course of the conversation. I hadn’t quite anticipated the depths of remorse and self-disgust that especially Warren felt, even to this day.

How has your opinion of the story changed over the years?

I found the story five or six years ago. I started writing the script two or three years ago and filmed it a year ago. I’ve gotten older. I’ve become a parent. I see it from a slightly different perspective, I think. I always felt that while they were deeply misguided, what they did was quite relatable.

I felt like I was very drawn to the idea of a central character whose main problem is that he doesn’t really have a problem but he needs one in order to have a story to tell. I admired the honesty of Spencer talking about how he’s kind of fantasized about having a traumatic experience. That is such a weird thing to want to have in your life but he felt that his life was so unlikely to be interesting that he was never going to have anything to make art about or to write about. I think that is a really relevant idea. Now, we’re in this culture where there’s a measurement of how valuable you are in the world because if people aren’t liking your stuff on Instagram or Facebook or Twitter or whatever, then you might as well not exist.

In a recent interview you talked about casting based on the essence of a character rather than the personal appearance of an actor. How did you know you cast the right people?

That all comes down to casting the best actors. You don’t need to find an actor who is similar to the character you want them to play. You just want to find an actor who is good enough to be able to inhabit that character and to understand what is driving them. I was never interested in finding people who were lookalikes. It was more of finding something in these actors who could get at the essence of each of these young men. The other thing for me was I didn’t want to cast Hollywood pretty boys. I wanted to cast an ensemble of actors who felt very deeply believable and they felt real.

What did the real-life subjects think of the movie?

I think they were all really nervous about watching it. They all felt that it was very truthful. They all thought the actors portrayed them very accurately and the person who was most important to me to show the film to and get approval from was the librarian, who’s the victim. I was very pleased that when we showed it to her, she also felt that it was very accurate. One of the things that was most gratifying was that afterwards she said that felt she could start to forgive them because I think she realized that they weren’t really criminals. They weren’t really bad people. They were just very misguided and naïve. They made an idiotic decision that went too far.