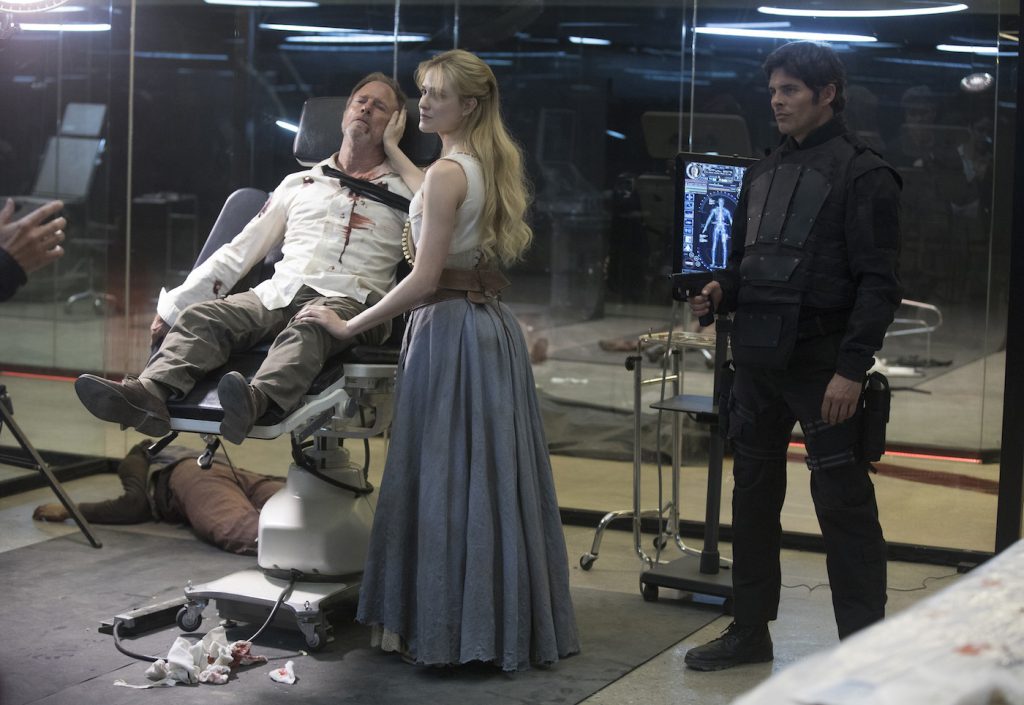 Production designer Howard Cummings’s thirty year career has encompassed an incredible range of varied and stylized work: from the fantastical designs showcased in Percy Jackson & The Olympians: The Lightening Thief, to the grounded realism seen in such films as Francis Coppola’s The Rainmaker, to the expressive realism seen in his 20 year stint working with director Steven Soderbergh on movies like The Underneath, Contagion, Haywire, Side Effects, and HBO’s Behind The Candelabra. There’s also his work on the mini-series The Kick, for which he won his two Emmys. We spoke with Howard about his work on season two of HBO’s Westworld, and how the requirements of presenting an interpretation of several alternate reality worlds for its guests presented their own challenges.

How did you come aboard for season two, and how does your process work in terms of learning about the design requirements of the season?

When I heard they were looking for a designer, I was a big fan of season one, and as a production designer, being able to do Westerns mashing up against Sci-Fi, which is great – that doesn’t happen that often, so I threw my hat into the ring. Also with the tease of Shogun World at the end of season one, I assumed they were going to explore other parks in season two. So I met with Jonathan Nolan and Lisa Joy, and we had a discussion about what they were thinking about doing. At the time there were about seven scripts. So to be able to enter into these new worlds, learning about additional ones as the scripts came in, such as the secret underground laboratory system that we never knew about, was quite exciting. Those labs are going to lead to some cataclysmic conclusions that I didn’t have information about when I first joined up, and now I can’t really talk about!

One of the things that made it a bit easier for me was that I came onboard after season one where a lot of the conceptual work for those existing sets had been fully explored and developed. Also, the crew of Westworld is so committed, and love their work so much, that it was fantastic for me to come onboard with this group of people who had this history. Part of my challenge as a designer was to reference what had been established and have it fit within the design vernacular of the story. Fortunately I had the opportunity to work with people like set decorator Julie Ochipinti. She’s the heart of the show’s design in some ways, not only in terms of the way the western world is portrayed, but also in the design of the lab equipment. All that host manufacturing equipment in season one, I asked her, “where did all that come from?” Julie was mining airplane parts, jet engines etc. She would find these engine parts. The Vitruvian man is set inside one of these jet engine turbines she sourced. My job was to go create the new secret laboratory, and it all had to come from that same design vernacular.

In episode four, we see the Delos observation chamber. How did that circular design concept develop? It was like a hamster habitat, where the clones of James Delos are tested by William over a span of thirty years!

We had a lot of big builds this season, and after a while I thought we should try to create a design on a minimum scale that could possibly repurpose an existing set. For sets of even that size it was a minimum of six weeks of building plus the short preproduction you’d need for design drawings, etcetera. So there was a time crunch involved, as in fact there was on the entire schedule, just a matter of fact for a series of this magnitude. I thought the control room might work as an existing set that could be repurposed for the observation chamber. But at that point we didn’t have all the scripts and we weren’t sure if the control room was going to be used again later on. At a certain point it became clear to me that we were going to be seeing the control room throughout many of the episodes, so I could not touch that resource. Having used the control room as a jumping off point for the observation chamber design, I thought let’s just use a circular design for the observation chamber, and wouldn’t it be cool if William and the lab techs could just walk around the entire chamber where the Delos clones are held and observe them from all angles, with the walls as a one-way mirror, using electronic technology that hasn’t been discovered yet but probably will be! It was like a human fish bowl.

The idea of the connectedness of the different types of rooms, with all that differentiated furniture, all placed within this single circular chamber, came from Lisa Joy, our producer, who directed that episode. She came up with this idea of wanting the introduction of this man to be all in one shot, and wanting the viewer to be able to see the room before you discover the man. So I figured out the size of the room based on an eleven-foot radius dolly track in the middle of it, which is the smallest dolly track radius you can have. I laid out all her story point bullets happening in this room and designed the room around that. The whole room was really based on that shot idea of Lisa’s.

How did the idea of the Shogun’s war camp come about?

Jonah’s [Jonathan Nolan] script for episode five originally had the Shogun scenes set in a palace. But then he came up with the idea of having the Shogun be in his war camp. With the curtain walls as this great graphic element of the camp, that’s something that you just don’t see on television shows. We were referencing a lot of [Akira] Kurosawa films for that, like Throne of Blood and Ran.

The new drones we see in the secret labs were pretty creepy looking. How did their look develop?

Along with these new secret labs that needed to be created – the underground labs – I was tasked with trying to come up with this design of the worker drones. This was another example of: what do I take from last year – you don’t want to venture too far from what was created in season one – and develop in season two. The background story idea was that when Delos took over the park, they are also beginning this secret project to extract behavioral data from the guests at the same time that the Mesa was being expanded. This data was going to be processed in the secret labs, unknown to the employees on the upper levels that run the park. These labs had to look different from what we’ve seen because of the function of who was running it, which were those drones. Jonah’s lead on the look of the drones was that he didn’t think they needed eyes, or a nose, or mouth, because they didn’t need to have that functionality like the later hosts. They didn’t actually need those facial sensors to do their work. Yet they had to function like humans because the tasks that they were doing were highly specialized laboratory work.

One of the most striking images from season one was the hosts being manufactured in the dip tanks. So I thought why would they finish off a host when they didn’t need those extra sensors for the secret lab work? If they didn’t need to finish off the host with skin covering and those facial sensors, they’d just take the base model, and that’s what they’re working with in the labs. That’s how that design came about.

How did the concept of The Cradle set come about? It reminded me a bit of H.A.L.’s brain chamber in 2001: A Space Odyssey.

I would say that you’re probably correct! I turned the page back to 2001. It even gets referenced more in an upcoming episode, which showcases bigger labs. The idea of the water tanks holding the host’s backup brains came from Jonah. He thinks that in the future electronics will be more efficiently cooled by water, or some kind of liquid. Doing research, I found a picture of an underground server room in a cave, I think it’s in Switzerland, with these glass tunnels from which you can see the servers from above, which was the springboard for that design.

The host’s brain pods – we called them chestnuts – also fell into my court. They weren’t described that way in the script, so I worked with a concept designer named Darren Dochterman, and we developed an understanding of how the chestnuts and all the tools associated with its use, are integrated. Jonah wanted something really horrible for the extraction tool used to grab the chestnuts out of the host’s heads, so we came up with that claw device. He was also very involved with the chestnut, or “pearl” development – I think there were sixty-eight different renders of that design. We were exploring how it all functioned together. And then physicalizing it all, I thought couldn’t these chestnuts – the backup brains of all the hosts – be in a series of large fish tanks. This led to the idea that all the tanks were interconnected on trees, and everything had to come out of the water. And that there were also feeder tanks where you can extract the chestnuts, and also pulling them out of the hosts had with the extraction tool had a water element in it. It was a lot of fun developing those methods.

My initial concept had the interconnected tree tanks designed as spirals, like DNA strands, but we decided to make them straight. Jonah gravitated to the tanks being red – in contrast to most shows where you see electronics as blue or green. The color red is important to Westworld’s overall look.

The house in episode seven, which Ford takes Bernard to, what did the design of that house tell us about he characters?

That was an actual Frank Lloyd Wright house in Pasadena called La Miniatura. Jonah had the idea for it to be this house or a Wright style of house, as in an earlier episode Arnold/Bernard says that it was his son’s favorite house, and he recreated that house as a way to honor his son’s memory. There are several Wright houses in Pasadena, but this one was actually going on the market around the time we were in production, so I was the first one in the door from the production team to check it out! We were fortunate to be able to film inside the house. On the show, it’s not really a house that’s been lived in, it’s more of an icon in the Westworld environment, and also later a testing ground for Bernard and Dolores. Also, in season two you learn that the location of Westworld is in South Asia, and Wright incorporated a lot of Asian design influences into his work, and that’s certainly the case with La Miniatura.