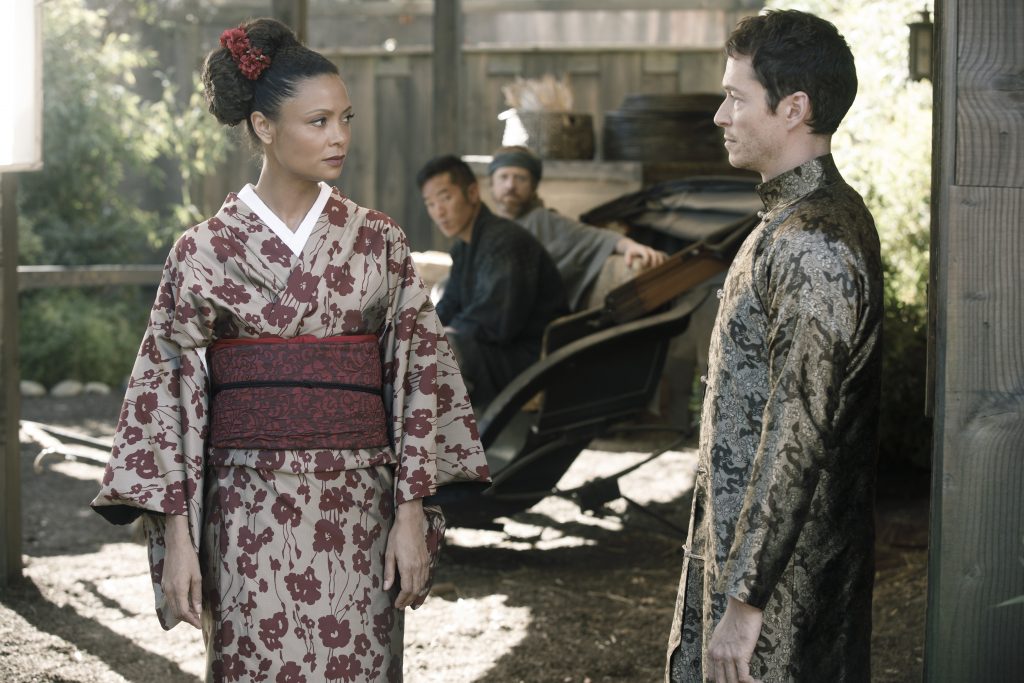 This is Maeve’s world and the rest of the hosts are just living in it. The mid-season finale of Westworld finally brought us into Shogun World, and it was a brutal introduction. The gorgeous parallels Jonathan Nolan has been teasing between the two parks really pays off in an interesting way. As always, HBO released a fascinating behind the scenes look at the latest episode, as well as a teaser for what’s to come in episode 6. Warning, spoilers ahead.

At the beginning of the episode, Maeve (Thandie Newton), Hector (Rodrigo Santoro), and Lee (Simon Quarterman) are captured by Musashi (Hiroyuki Sanada) and taken into the park. The hosts soon realize they have two things working to their advantage. 1) The storyline in Shogun World turns out to be eerily familiar and 2) Maeve can control other hosts with her mind. Lee admits that there are a lot of storylines to manage and the opening loop is very similar to Maeve’s back in Sweetwater.

Reaching a heightened awareness is reliant on the hosts learning from one another. There is potentially a great deal they can come to realize through watching another host living a similar life. As hosts continue in their revolt, there will be strength in numbers. There’s no better way to bond and befriend a new ally than to recognize yourself in their story. Plus, Maeve is already a natural with a samurai sword. Finding Shogun World is likely to only strengthen Maeve’s power. And for the hosts who aren’t interested in being an ally, Maeve has the nifty mind control trick she’s honing every day.

In order to mirror Westworld, production designer Howard Cummings maintained similar elements for the Shogun World set. Art director, Jon Carlos, shared a really interesting tidbit. Each of the storefronts represents a part of the Westworld production team from hair and makeup to stunts. The Delos Destinations website has updated to include information about Shogun World, which was previously offline.

A preview of the next episode teases a deeper dive into ‘the cradle.’ Bernard (Jeffrey Wright) says it cannot be accessed remotely, but what exactly is the cradle? A conversation between Dolores (Evan Rachel Wood) and Arnold shows her beginning to recognize when something he says is a lie. This seems to indicate she can now differentiate memories from programming and is far less gullible than season 1. A reckoning is coming and Maeve and Dolores will surely lead the charge.