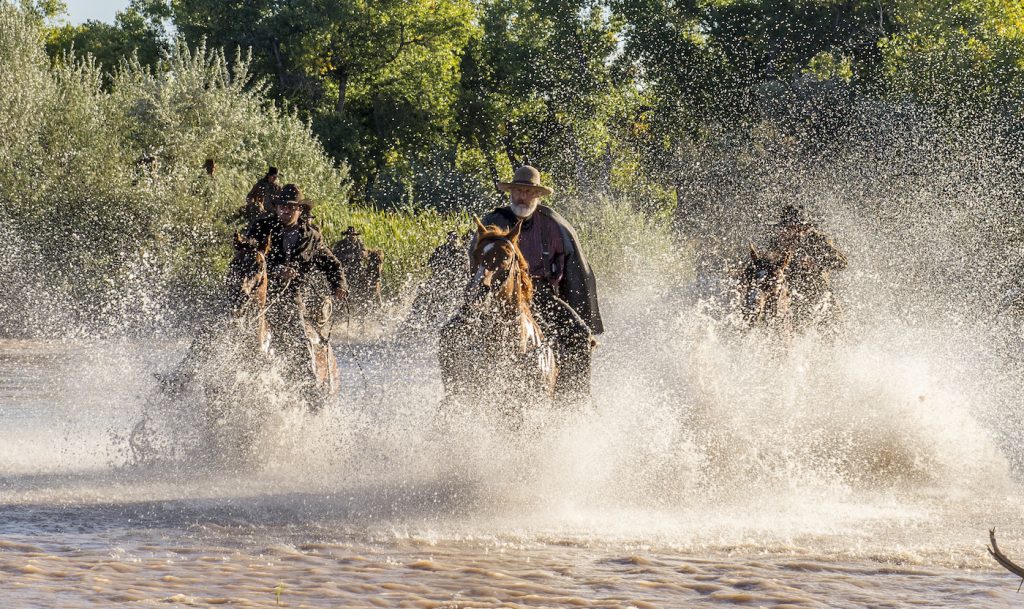 When it comes to designing sound for westerns, seven-time Oscar nominee Wylie Stateman keeps his ears attuned to wind, horses, gunshots and what he calls “the ride up and the ride out.” Speaking from his Twenty Four Seven Sound studio in Topanga Canyon near L.A., Stateman says, “You need to capture the sense of the countryside and traveling by horseback because that’s what makes a western what it is. It’s all about the big sky and the ride up and the ride out, because that’s how you transport the audience into and away from the dialogue scenes.”

For Netflix’ seven-episode limited series Godless, set in 1884 New Mexico, supervising sound editor Stateman and re-recording mixer/co-supervising sound editor Eric Hoehn used those transitions to evoke a parched wilderness landscape. Weaving together subtle audio cues with an elegant guitar-and-cello score from composer Carlos Rafael Rivera, they crafted a spare sound mix that allowed the characters’ interactions to shine. “Dialogue reigns supreme in this series,” says Stateman. “We work with the spaces between the dialogue, using and environmental sounds and music to lift the audience and carry them to and from each location.”

At the suggestion of Godless creator Scott Frank, Hoehn brought his gear to the fictional frontier town of LaBelle, built from scratch in the New Mexico desert, and soaked up the sounds of silence common to the western landscape. “We sonically mapped the whole town,” Hoehn recalls. “At night, you might hear critters, but other times it’s completely silent. When you’re in the middle of an open space like that, there’s not a lot of acoustic echoes and slap backs. And we didn’t have birds and other extraneous backgrounds, so we focused more on transient sounds, like how the wind blows the dust from time to time.”

While filmmakers shot Godless scenes at other locations, Hoehn set up eight microphones on the deserted streets of LaBelle. “We brought in guns and live ammo when nobody else was around and recorded gun shots and echoes and bullets whizzing through the street,” he recalls. During post-production, Hoehn and Stateman synched snippets of their gunfight audio to match the show’s climactic shoot-out. Hoehn says, “We had a lot of great material mapped to that environment, so the audio integrated really well into the track with minimal technical effort.”

The sound for another key Godless sequence, in which hero Roy Goode (Jack O’Connell) teaches a native American teenager how to tame a horse, was also assembled almost entirely in post-production. Hoehn says, “Using all the material we recorded in New Mexico along with the various libraries Wiley gathered over the years, we added everything from the touch of the horse’s fur and the hooves to the whipping of the tail. Each breath of the horse was added like we were painting the sound with a fine brush.”

Guided by notes from writer-director Frank embedded in dailies shared via PIX software, Stateman and Hoehn shaped their soundscape in collaboration with editor Michelle Tesoro and VFX supervisor John Swallow. After mixing the sound under optimal conditions through the studio’s 28 Dolby Atmos speakers, they made sure the audio sounded good on cellphones and laptops. Hoehn says, “It’s like mixing music in a studio and then listening to it on your car speakers. When we listen to our mix on smaller devices, maybe there’s too much low end in the music and it’s competing with the dialogue. We’ll go back to our studio and it becomes like you’re putting the sound under a microscope. When you turn a knob to reduce the low frequencies, you can really feel it.”

Noting that a majority of Netflix customers sometimes watch shows wearing headphones or earbuds, Stateman places a premium on clarity. “The human ear does not like chaos,” he says. “It wants to hear one thing at a time. We believe good storytelling in sound design should be like a parade, with one beautiful element closely followed by the next, and that’s why we don’t clutter things. We’re very clear with the audience about what we want the audience to hear. And the reward for listening is that you become thoroughly immersed in the story.”