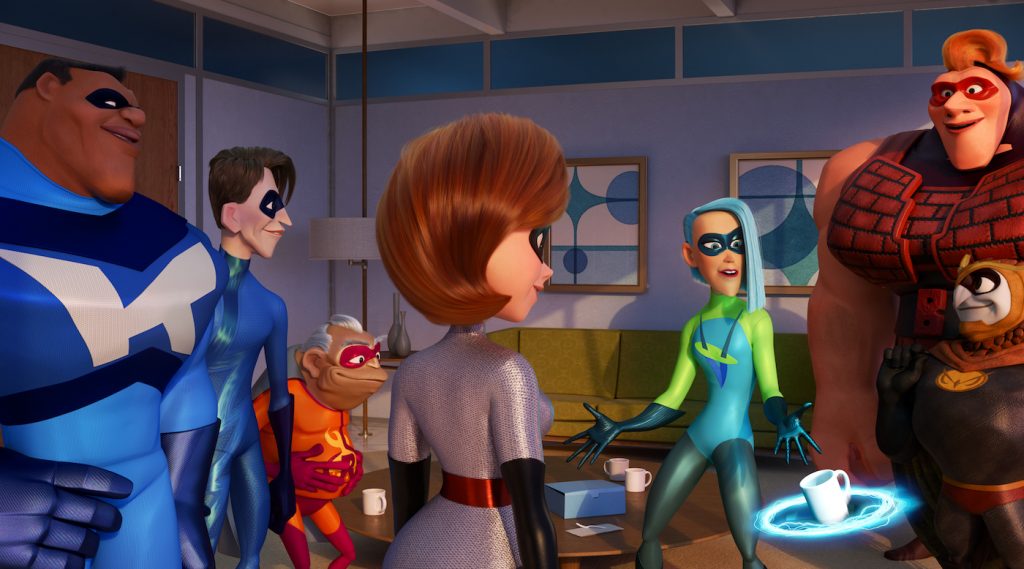 Review Roundup: Incredibles 2 is one of Pixar’s Best Sequels

We’ve all been patiently waiting a long 14 years for the return of our favorite family film, The Incredibles, and the time has finally come with the upcoming release of Incredibles 2. Writer-director Brad Bird had a lot to live up to from his first magnificent Pixar film that changed the game and set the bar high for superhero movies. The critics have weighed in—Bird has successfully reached, and possibly even surpassed, the bar he set with the first film.

Bird decided to pick up Incredibles 2 more or less exactly where the first film left off. The movie opens with the same disturbance and rise of Underminer (John Ratzenberger) with his massive drill in effort to terrorize the city of Metroville. It is of course the Parr family who steps on to take down this destructive villain in order to save the world. However, the Parr family is hit with curve ball when the civil authorities ban superheroes because they have had enough of the Incredibles’ destruction and disturbance.

What does this mean for our beloved Superhero family? Well, Bob (Craig T. Nelson) and Helen Parr (Holly Hunter), along with their children, teenager Violet (Sarah Vowell), 10-year-old Dash (Huckleberry Milner), and baby Jack-Jack (Eli Fucile) are forced to live their lives as “normal” citizens and hang up their Incredibles outfit for the time being. We all know Mr. Incredible as a rock star on the battle field, but not as a “stay-at home” dad dealing with his daughter’s boy issues and his boys unable to control their superhero abilities. Though Mr. Incredible’s life seems to be taking a plunge, Helen gets a call to suit up and return to the field to take on the villain Screenslaver. So, as Mr. Incredible takes on the role of a hands-on father, Helen is able to put to use her extremely elastic morphing ability, now better than ever before, and help save the world once again. This sequel not only reinforces women in the workforce, which has made it popular with women of all ages, but it also has those intriguingly comical moments that made us fall in love with Bird’s first movie.

Here’s what the critics are saying. Incredibles 2 hits the theaters this Friday, June 15.

Brian Tallerico, Roger Ebert: “Pixar films are famously beautiful when it comes to character design and art direction, but Incredibles 2 is one of the most significant achievements in this regard.”

Michael O’Sullivan, Washington Post: “Perhaps most intriguingly, Incredibles 2 is both pop-culture eye candy and a sly critique of it.”

David Edelstein, New York Magazine/Vulture: “Brad Bird’s Incredibles 2 is, much like its predecessor, delightful as an animated feature but really, really delightful as a superhero picture.”

Brian Truitt, USA Today: “The animation is stellar and detailed in excellent action sequences, Michael Giacchino’s score swings harder than ever, and the first film’s family-friendly warmth is just as appealing now as it was then.”

Mara Reinstein, Us Weekly: “Their adventures are timeless. And this one is worth the incredibly long wait.”

Angie Han, Mashable: “It’s like the best of the Avenger-on-Avenger bits from Captain America: Civil War or Avengers: Infinity War – only better, because it’s easier to follow the the crisp, colorful action.”

Featured image: SUPER DREAMS – When Elastigirl is called on to lead a mission to bring back Supers, she meets a group of new Supers who aspire to join the ranks, including Voyd, a mega-fan whose superpower is the ability to divert and manipulate objects around her. Featuring the voices of Holly Hunter as Helen aka Elastigirl, Sophia Bush as Voyd, Phil LaMarr as Krushauer and HeLectrix, and Paul Eiding as Reflux, “Incredibles 2” opens in U.S. theaters on June 15, 2018.. ©2018 Disney•Pixar. All Rights Reserved.