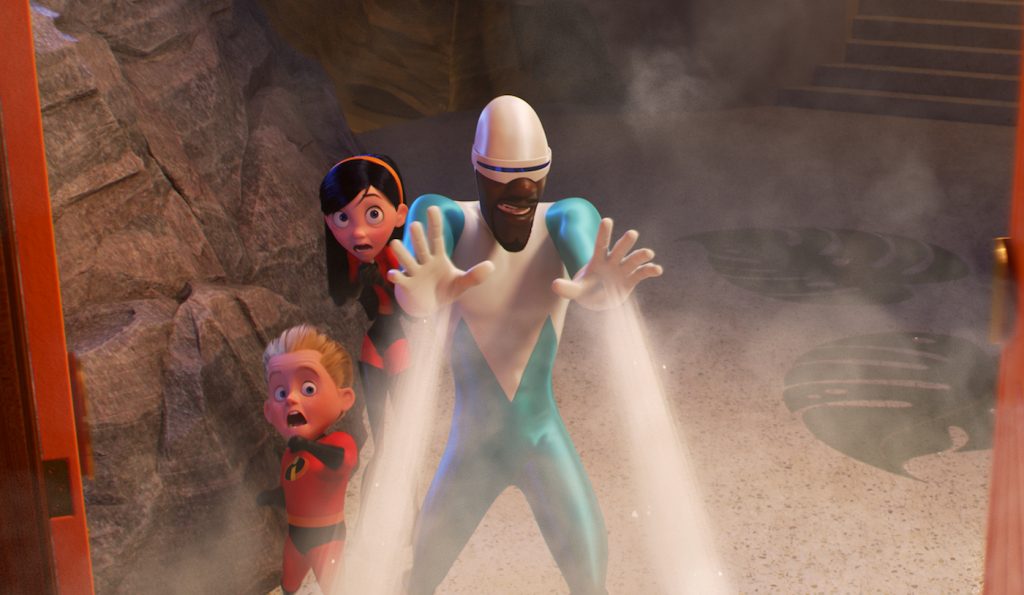 After a fourteen year interlude, director Brad Bird’s second installment starrring Pixar’s beloved animated superhero family, Incredibles 2, came out this week. As Mr. Incredible (Craig T. Nelson), Elastigirl (Holly Hunter), and their children Violet (Sarah Vowell), Dashiell (Huck Milner), and baby Jack-Jack attempt to navigate a comeback, a first love, math, and a wild array of newfound superpowers (respectively), the audience is treated to a seamless retro-futuristic setting for the endeavors. Earlier, we spoke with production designer Ralph Eggleston about the research and design behind the sets; in this installment, Eggleston walks us through the difference in animation technology between the two Incredibles and the ups and downs of the major advances its made.

What was the transition like from the first Incredibles film to the sequel, particularly given the long gap between the two?

I’d just finished Finding Nemo and I was on a beach in Hawaii, taking three months off. The first week I was there I got a call from Steve Jobs and then Brad Bird asking if I could come back and help out on the Incredibles. They said it was just for a couple weeks, maybe a month or two, and it ended up being a year and a half. I loved doing it — Brad gave me his my first job in the business, so I’ll pretty much do anything for the guy.

The technology is a lot better now. When I started out, on Toy Story, we had wonderful, very smart people who were literally building the hardware and the software to make the film as we were making the film. That was 1995. Now, twenty-something years later, the tools are better, and a whole generation has grown up using these tools, and they have great visual skills. So now I’m able to do a rough drawing, hand it to someone, and they’re able to make it work. And you know, the technology is there, we can kind of do anything now. So that part as a designer is really exciting — I don’t have to worry about what we can’t do. We’ve got a lot of great people at Pixar to figure it out — and it’s a huge relief, to be honest with you.

Do technological advancements make animation easier, while presenting other challenges?

You are correct. One of the things that a lot of our new lighting tools do is immediately render everything as though it’s realistic. The world of the Incredibles is not always necessarily realistic. We wanted to keep a graphic sensibility to the style of the film. Also, with modeling, on a lot of our films, we want to give a sense of history to the set, or the chairs, or a car, and we found that by adding too much detail, it didn’t feel like the Incredibles. As the king said in Amadeus, “too many notes.” So we did some furniture that looked like people had sat in it over the years, and boy, it looked really really great, but it felt wrong for the Incredibles. So I told [the team] just starch it by 30%, and they tightened it up a bit and then it felt like the Incredibles.

So we had to find that line all over the film, with the tools that we had. Each of our films is different, and we want to continue to endeavor that the way the world looks in the film is suited to that story and specific characters. I don’t think that the character of the Parrs would necessarily fit in the world of Coco. Coco is all about more detail, and filling a lot of history of the world of the day. The Incredibles is all about the here and the now and the future.

So you can’t really apply the technology with a broad brush to these worlds.

It’s really the design process. One of the things I’m most proud of, is something one of the all-time great production designers, Richard Silver, once told me. He said that if you’ve done your job right, no one will notice. One of the things we love about what we get to do is that people take for granted the world of the characters inhabit in most of our films. People comment, oh it’s beautiful and the animation is great, or whatever, and that’s always nice to hear, but one of the biggest compliments you get is when they don’t really say much at all and take it for granted that of course that’s where [the characters] live. But there’s a lot of thought, design, and work put into building, getting very specific, and designing the worlds that our films take place in.

I always refer to the sets as characters, as much as any of the characters in the film are, because they are helping to describe a history, a little bit about where the characters are in their lives, and how the world is impacting what they’re doing. That’s one of the most fun parts.

Going back to your previous question, about all the new technology and all the talent we have to utilize it, it really is the most exciting part of the future of my job. I don’t have to think about that, and can really focus on design, and digging deeper on that. That’s going to be so much fun.

Featured image: CHILLING OUT – Frozone is back in “Incredibles 2,” cooler than ever and lending a helping hand when the Parrs need him most. Featuring the voices of Huckleberry Milner as Dash, Sarah Vowell as Violet ad Samuel L. Jackson as Frozone aka Lucius Best, “Incredibles 2” opens in U.S. theaters on June 15, 2018. ©2018 Disney•Pixar. All Righs Reserved.