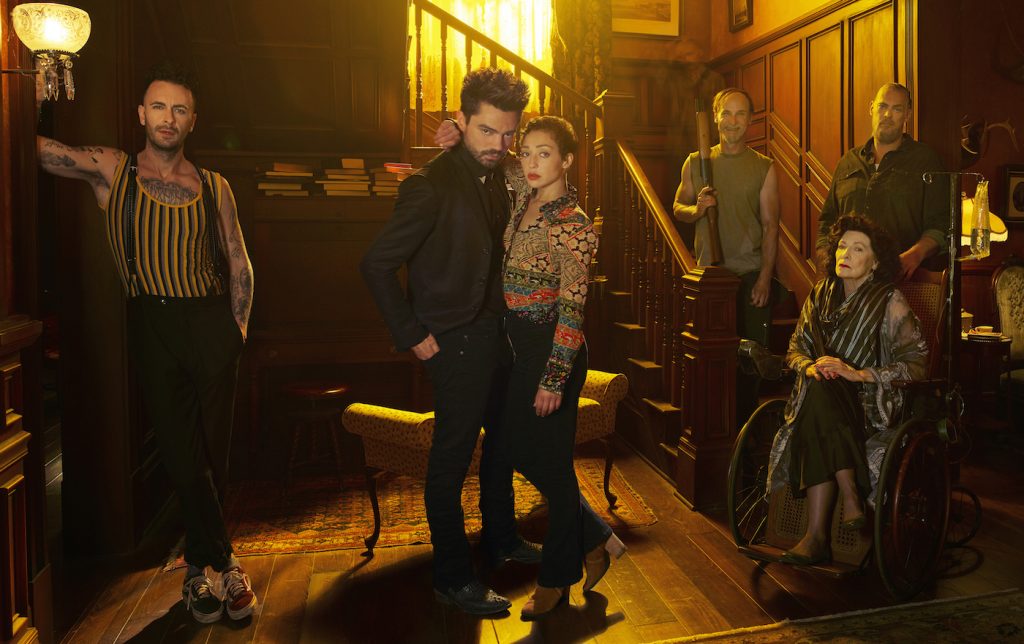 It had to happen eventually, according to showrunner Sam Catlin, so Preacher Season 3 begins this Sunday, June 24, at the creepy Angelville plantation ruled by the terrifying spell-caster known as “Grandma.” Fans of the comic book source material figured the matriarch would show up at some point, but they didn’t expect her to be portrayed by Betty Buckley, the Broadway musical icon. “Betty‘s got this great authority and her audition was incredible,” Catlin says. “Apparently, she’s a fan of the show. At least that’s what she tells me. I actually believe her, because she’s repeated it, so if she’s lying, she’s a psychopath. And I don’t think Betty Buckley is a psychopath.”

Catlin might have psychopaths on the mind because he’s talking up a show that, from the outset, has reveled in a steady stream of blood, blasphemy, hellish visitations and carnage. Describing his adaptation of the lurid universe originally created by comic book writer Garth Ennis and artist Steve Dillon, Catlin half-jokes, “I didn’t know there were so many ways to show guts and intestines. But we haven’t run out of ways to do it yet. Season three is going to be crazier by far than either of the other two seasons put together.”

In its first episode of the season, the AMC series introduces Grandma to the supernaturally empowered Texas preacher Jesse Custer (Dominic Cooper), Irish vampire Cassidy (Joe Gilgun) and temporarily dead assassin Tulip, played by Oscar-nominated actress Ruth Negga (Loving). Catlin says, “For her take on the role, Betty layered all this affection for Jesse on top of her sadism. The result is this sort of unsettling stew of love and hate.”

Catlin and his six-person writers’ room crafted a storyline this year aimed at satisfying connoisseurs of the unhinged Angelville crew, which include Grandma’s enormous henchman Jody (Jeremy Childs) and the volatile T.C. (Colin Cunningham). “You can’t call the show Preacher and not go to Angelville,” Catlin says. “I didn’t know exactly when we were going to get there, but there was no way we could avoid Grandma and [her henchmen] Jody and CT, or Preacher fans would have burned my children’s school down and rightly so!”

Preacher Season 3 filmed early this year in Louisiana starting in January. Principal photography ended in May. The lengthy Mississippi Delta shoot demanded deep commitment from cast and crew, Catlin says. “Our actors worked their asses off just trying to make it through to the next episode. When you spend ten, twelve, sometimes 14 hours a day together, everybody becomes really close and by the end, it’s sort of like carnie folk or a traveling troupe of acrobats.”

Catlin got a handle on how to harness all that camaraderie when he produced Breaking Bad and watched creator Vince Gilligan steer the series to two Outstanding Drama Emmy awards. “I learned an enormous amount about the job from Vince, who’s an amazing show runner,” Catlin says. “But Preacher is tonally very different in terms of the creative muscles you have to use. Breaking Bad was this immersive, microscopic, voyeuristic look at a man acting in human ways in this very human environment. Preacher is not that. It’s aware of itself, it’s self-conscious, it knows it’s a TV show, it knows about pop culture and music. And Preacher is irreverent.”

Trafficking in spooky atmospherics and hyper-violent action sequences, Preacher has developed a stylized visual aesthetic thanks in part to new production designer Meghan C. Rogers, who worked on the Louisiana-set drama series Underground, and returning cinematographers Andy Vogel and John Grillo. “We want Preacher to look like a movie rather than a TV show,” Catlin explains. “Sometimes that means it’s kind of a noir movie, sometimes it’s gothic, sometimes it’s a western or a Hong Kong martial arts movie. There’s no other show like Preacher on television, and maybe there’s a good reason for that,” he laughs “But this is basically what we want Preacher to look like. We want it to look like a six hour long movie.”