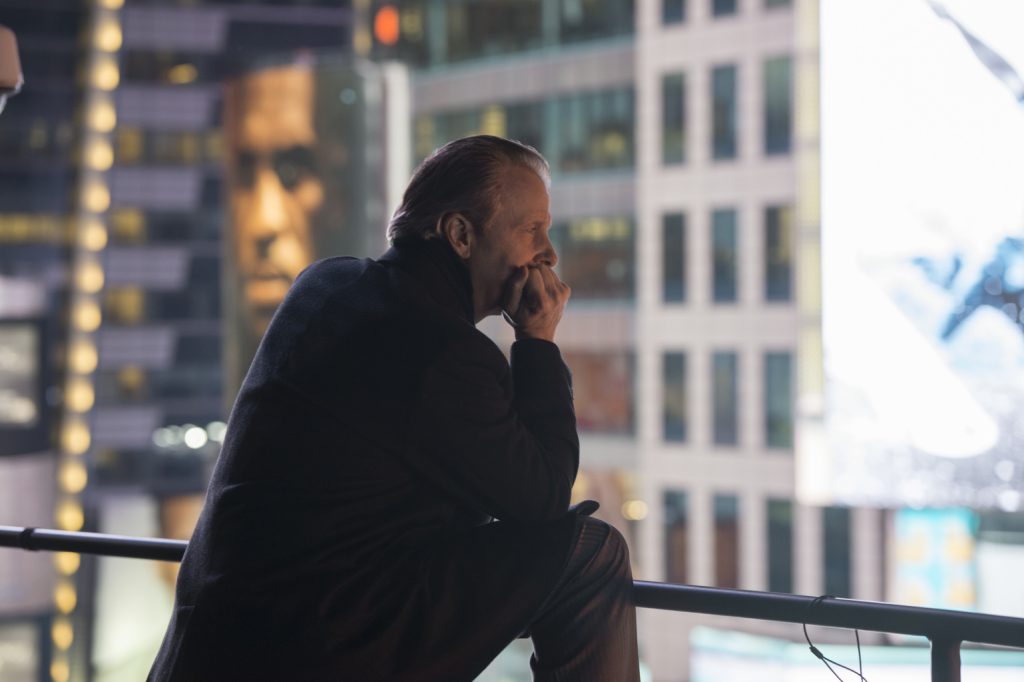 Nearly every American over the age of 25 remembers the horrific day of the September 11 attacks. Images of that day are tragically familiar. The events were so meaningful and are so well known that VFX artists on Hulu’s The Looming Tower took deliberate care to vigilantly recreate pre-9/11 New York. The series, starring Peter Sarsgaard, Jeff Daniels, Tahar Rahim, and Wrenn Schmidt, explores the tense relationship between the FBI and CIA that obstructed vital intelligence about the impending attacks. Phosphene FX CEO/Executive Producer Vivian Connolly and CCO, Senior Visual Effects Supervisor John Bair led the team that designed the digital sets for the the show.

“There are many big moments within the show,” Bair recalled, “but in general, recreating mini landmark things from that era from the 90s up to and including 2001. The scope of the work is recreating the World Trade Center as faithfully as possible including things you don’t often see like the ground level and what the street life was around it, inside the lobby, and of course the towers themselves.”

Ground zero of the attacks is particularly familiar territory to the Phosphene team. They also worked on Extremely Loud & Incredibly Close about a boy who journeys through New York searching for meaning in his father’s death.

“We have become historians of the New York City skyline from different vantage points and at what stage of completion the new World Trade Center or the old World Trade Center was,” Connolly said. “All these iconic places. New York is such an iconic location that even people who are tourists know so well that its really critical to know what you’re doing and the kinds of things people catch.”

The expansive outdoor cityscapes would be impossible to build in real life, especially at the level of detail the VFX team is able to create. Grand interior scenes are also costly and difficult to make, particularly to scale. Connolly and Bair collaborated with the other filmmakers on set to determine how best to tackle the problem.

“Specifically in Looming Tower, there’s a sequence where a character is walking through the lobby of the World Trade Center and that was planned extensively beforehand,” Bair explained. “The cinematographer, the director, the art department, and everybody kind of works together to figure out what the shot wants to look like and how to pull it off in the best possible way. There’s always decisions to make, how much would the art department design and have constructed vs. how much of it should fall off and just become visual effects.”

The solution is not always a zero sum game. The departments can decide to collaborate and the result is extremely convincing, drawing the audience into the story.

“The ground floor of the World Trade Center was a multi-tiered environment that had massive windows, vertical windows, and it had a mezzanine level and banks of elevators,” Bair recalled. “Reconstructing all of that plus seeing the environment outside was just an impossibility. Ultimately, we ended up building about 8 or 10 feet off the ground so that all of the actors in the scene would kind of have an environment to play in front of whereas at that point then digital effects could take over and pick up some of the heavy lifting of building in the true elaborate architecture.”

Connolly and Bair have worked on several period pieces across decades including mid-19th century of The Greatest Showman, Prohibition era in Boardwalk Empire, the 1950s of The Marvelous Mrs. Maisel, and the 1970s of The Deuce. Capturing historic periods to specific events requires precise detail supported by realism.

“There’s no messing around when it comes to research,” Connolly stressed. “It’s the absolute, most critical piece of the first step of the project.”

Life in New York has changed in a myriad of ways large and small in the subsequent years, but natives and tourists remember well the buildings that once were. Connolly and Bair were tasked with recreating a celebration in Times Square, an area that vibrantly displays the progress and technology that washes over the city year after year.

“When you go back to look at things like that, we’re so used to being able to find imagery of anything so even doing research for things like this is challenging in a way,” Bair explained. “Just to find very accurate representations of what we’re trying to recreate because there’s always an interest in being faithful to the way things looked historically.”

That level of detail extends all the way to contemporary cultural references of the time. The VFX artists even strive to nail the street level details.

“You end up doing piecemeal research like looking up a newspaper clipping to find out what was showing at movie theatres on this exact week where the show is taking place,” Bair said. “The research can come from all directions, but there are so many good public resources here in New York that we take advantage.”

The work that Connolly, Bair, and their team provide is something of a time machine for the production. The characters can be placed in any location at any point in time with a believability that enhances the storytelling.

“It’s important that when everything is finished, it’s rendered, and it’s in the show, it doesn’t jump out in any way as being an effect, even though clearly, these shows were not shot 20, 30 years ago,” Bair said.

Connolly and Bair took particular care on The Looming Tower, a project with personal resonance.

Featured Image: THE LOOMING TOWER — “Y2K” – Episode 105 – The CIA and FBI are on high alert as threats surrounding the new millennium abound. OÕNeill and Soufan raid an AQ cell in Brooklyn. The CIA continues to hide vital information from the FBI while they track suspicious individuals entering the U.S. John O’Neill (Jeff Daniels), shown. (Photo by: JoJo Whilden/Hulu)