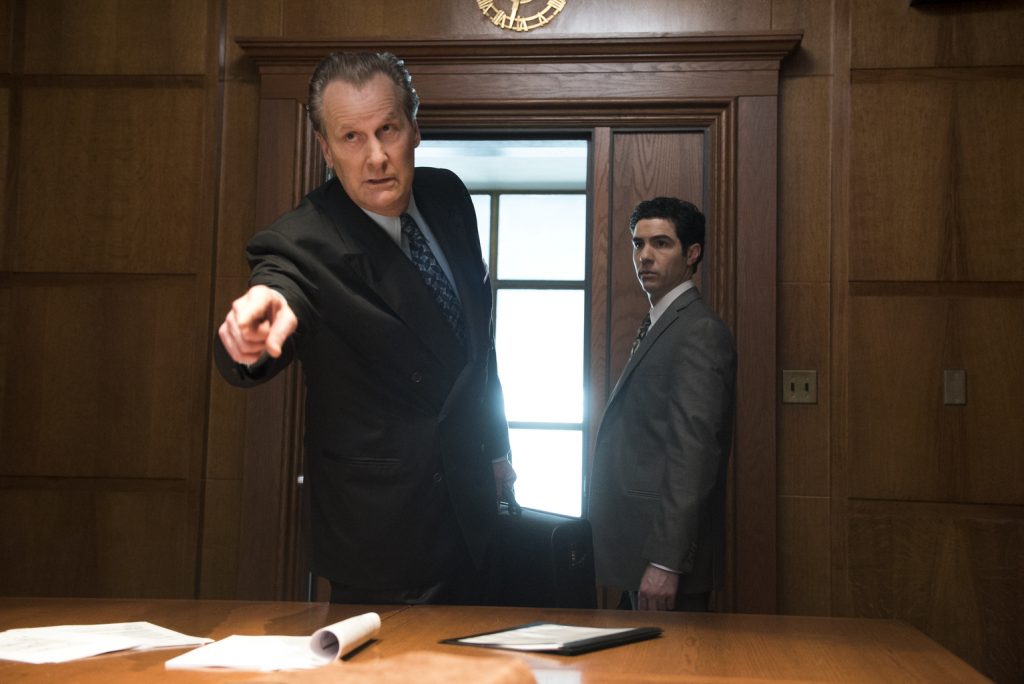 The Looming Tower is a new Hulu series based on Lawrence Wright’s non-fiction book about the events leading up to the attack on the United States on 9/11. The focus is on the heads of the CIA and FBI operations investigating Al-Qaeda, played by Peter Sarsgaard and Jeff Daniels, and how their often-petty animosity and territoriality prevented the sharing of critical information that could have prevented the attacks on the Pentagon and World Trade Center. In an interview, Daniels, Sarsgaard and co-stars Tahar Rahim and Wrenn Schmidt discuss taking on such weighty material.

Tahar, you play a real-life character, FBI agent Ali Soufan, whose Lebanese heritage gives him an understanding of the Muslim world, but also makes people from all sides suspicious of his loyalties.

Tahar Rahim: There are two ways to take it; it is something that could bother him or he could just accept it. I think it’s much easier to accept it because having two different cultures and to be able to marry them is much more interesting and much more helpful for him. So he decides just to accept it because his purpose is more. He wants to change the world to help people. He’s kind of a hero in the shadows, trying to help people. Maybe it is because of what he has lived through when he was a kid. As an actor, I had to understand why a young man of 27 years old wants to do this instead of going out or doing something else; maybe he needs to give back something to someone. I understand that when they hijack his religion and all these values that he’s been raised with, when somebody uses this to do evil, it hurts, and when you have the power to answer to them or to change things you’ve got to use it.

Wrenn, you play Diane Marsh, a true believer, the aide to Peter Sarsgaard’s character, Martin Schmidt, the head of the CIA team working out of what they called Alec Station. It seems it is both an asset and a liability to cultivate the kind of perpetual paranoia necessary for that job. What drew her to it?

Wrenn Schmidt: I think that she’s a person that can see what is happening because she’s someone who is fascinated by strategy, and someone who is constantly thinking of angles and different outcomes. I think she’s someone who is constantly watching the terrain of everything that’s going on around her, both within Alec Station and the greater politics within the CIA and the government as well. She is fascinated with geopolitics and how something that seemingly starts out as a small wave can turn into a tsunami, and she is always constantly looking for what those events are and what the possible outcomes are.

She has a very potent mind.

I don’t want to give away too much of what happens, but there is a moment when she unleashes her mind on someone and just lays that person flat. She just goes through a possible series of events, and the equation adds up a certain way where the other person is left speechless. She’s always got that in her, but I also think that that’s something that very much comes from being a student of Martin Schmidt; someone who where everyone else sees a closed-door, he finds the opening, and I think she’s fascinated by how his mind works.

One of the man themes in The Looming Tower is the agency’s own self-defeating tendency to hoard and hold secrets, the in-fighting, etcetera.

I think there are two things; One, I think in some ways (at least in our narrative), had people listened to Martin Schmidt and Diane Marsh early on, who knows what would have happened. Had those ten training camps been bombed and had that been effective, despite the collateral damage, it’s possible it would have now been a great thing, but I think they were all arguing about whether the outcome of something later on could be so much worse. Two, I will also say I think when you’ve got an organization whose greatest asset is secrecy, to them intelligence is everything, and when intelligence becomes evidence and then it becomes news and then it’s used in courtroom, it’s no longer of use to them. So I think that it’s not just paranoia, it’s also urgency and safeguarding their strongest asset and a full belief that they are best equipped to solve this problem.

Peter, your character is a composite. Does that give you more freedom to develop the role?

Peter Sarsgaard: One hundred percent, and yeah so much nicer. I’ve done it so many times where I’ve played real people, Shattered Glass, and Wormwood, the film I just did, which was also about the CIA. It’s most of what I do. A lot of what is being done these days is based off of real events and real people, maybe that’s a reaction to what’s going on in other areas, in journalism for example, movies trying to tell their own version of the truth.

Jeff, how do you prepare to play a real-life character, but not one who was known enough to the audience that there would be expectation about how he appears and speaks?

Jeff Daniels: You do all the research. I found one Frontline interview from 1997, a sit-down for 5 minutes. That was it. So you sit down with his FBI partners and you’re just taking notes because they’re giving you the documentary on John O’Neil. These guys worked with him for years. They saw the good and the bad. They tell you everything because that’s what you’re playing; you’re playing a human being, especially O’Neill who was brilliant and a mess, so they spoke to all of that. So it’s gathering the information from Larry’s book and the script and then if you’ve done all that work, you can start to think like he does. That’s the trick, that’s the little internal trick; you’ve got to do all that other work and the memorization so much so that you don’t even think about the words because they’re there, now you can think like O’Neill does.

So when Martin Schmidt starts spitting back at you, you don’t react out of some preplanned thing you did in the hotel room last night in your own little private rehearsal, you react to that guy in your thinking; when you’re saying it you’re thinking what he’s thinking. When you’re listening, you’re thinking what he’s hearing. Once you can get to that place, then all these little externals in the body and the way he handles himself and the rhythms and the music of the way O’Neill spoke (at least in the script), all that comes. Peter was saying earlier we make acting so complicated and sometimes there’s a lot of work. I had to go to grad school on John O’Neil. But once you’ve gone to grad school, once you’ve graduated, then the question is, how simple can you make it? Sometimes thinking like the guy is enough of a trigger to let a hundred things happen in between action and cut. That’s the fun of acting after 40 years, finding that kind of thing.

Featured image: THE LOOMING TOWER — “Losing My Religion” – Episode 102 – Following the simultaneous embassy bombings in Kenya and Tanzania, the FBI begins its investigation on the ground while the CIA starts working on a retaliation plan. John O’Neill (Jeff Daniels) and Ali Soufan (Tahar Rahim), shown. (Photo by: JoJo Whilden/Hulu)