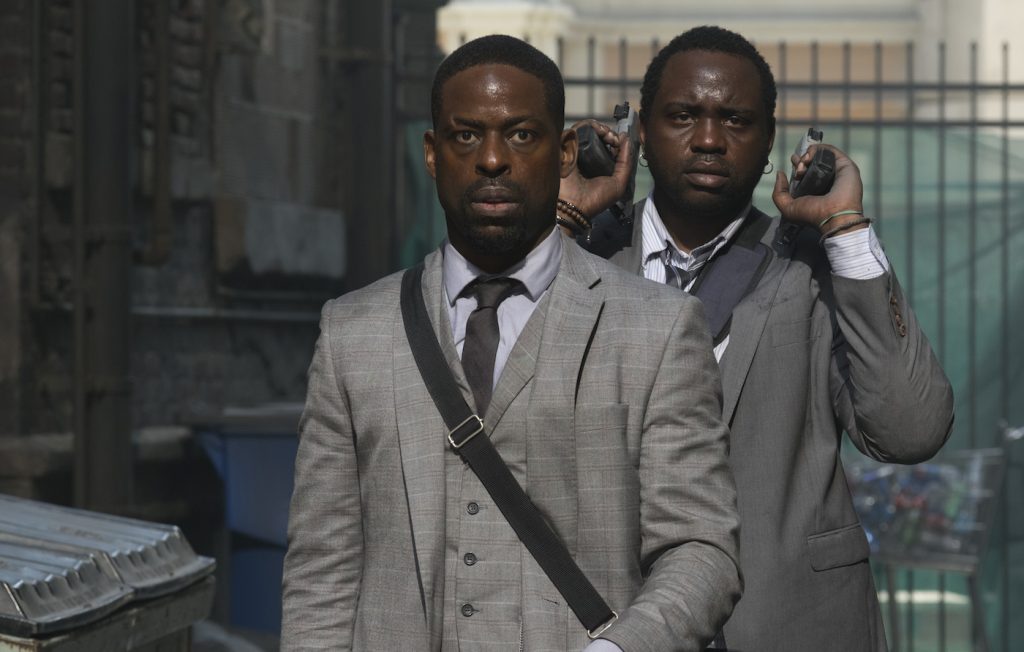 If you’ve been sleeping on Brian Tyree Henry, you better wake up immediately. The triple threat is ready to dominate the TV, film and stage this year and he’s only just getting started. First up on his plate is the delightful summer action flick, Hotel Artemis, from writer/director Drew Pearce. Henry plays Honolulu, one of a pair of bank robbing brothers (alongside IRL bestie Sterling K. Brown) who after a botched robbery end up at the Hotel Artemis—an underground hospital in Los Angeles for criminals ran by The Nurse (Jodie Foster). Little do Honolulu and Waikiki (Brown) know that their botched robbery has set the wheels in motion of something much, much more dangerous. The Credits hopped on the phone with Henry to talk working with his BFF, shooting those action scenes and playing characters who need a champion.

How’d you get involved in Hotel Artemis?

I’m looking at the script and one of the first things that is written on the page is about Honolulu and I instantly connected with the character, and when I realized that he had a brother, all I could hear was Sterling’s [K. Brown] voice. I was like, man, how cool would it be if I got to be in an action movie with my best friend and we get to go and rob a bank? I’m very grateful for Drew Pearce to have seen that and to make that an actuality. Also, just the way that Drew writes. The fact that this takes place just 10 years later from present day, dealing with the water shortage and privatized water, I was like, this is a little real! It really sparked an interest in me, and I keep saying, if this was 15 year old me, I would have been like ‘Oh my god! yo, I’m putting this poster in my locker.’ And also, Jodie Foster, you know what I mean? Let’s not sleep here.

How was getting to work with your best friend on such a fun action movie?

It was like a damn Chuck E. Cheese every day and the movie was the ball pit. It was really fun to go and see my friend be a leading man and a f**king action hero. And to watch him play with Jodie Foster, watch him do what he was doing. Also, I got to be his younger brother than he has to carry around and take care of and I’m covered in blood. It used to take some friendships in this business decades to even be in the same room with each other for a project and the fact that within a year he and I got to share the screen together and be brothers is a dream come true. There’s a scene where we were standing side by side with our masks. I was like, oh my god! oh my god! That’s really going down. It’s a moment in time that will forever be etched in my mind. I never doubted in my life that he could be an action hero, but I damn sure never thought that I would be right beside him, being this brother that is like, oh man you messed things up again!

The first scene is your big action scene. What was it like filming that?

It was great, because I’m a fan of the genre. I love thrillers, I love when it’s like a bunch of no-good people in a room together fighting tooth and nail to the end. So, with this one, it was really cool because the reason we end up at that hotel in the first place is my fault. I love the goof that messes things up, but at the end of the day there’s somebody fighting for him. You don’t really get to see that a lot in movies like this, especially with actors of color. It’s easy for people to turn us against each other and fight tooth and nail to harm one another, but in this one, it’s really about the necessity of each other and what that brotherhood means. It really stuck with me, that kind of relationship, and I really longed to see movies like that. I think about that with Atlanta, too. Al and Earn are first cousins but at the end of the day they’re basically like brothers. He holds it and tries to uphold it at all times. This season’s finale kind of finally showcased that, when I’m sitting next to him…

Like you just mentioned, your character is the catalyst of the film and I think bonds Sterling and Jodie’s characters. What was it like being that catalyst?

I have a tradition of playing really good cousins to people. The link that is the no good link but at the end of the day, I like being the champion for those kind of characters. I like championing for them because most of the time it’s easy for people to turn their backs on them and be like, we know he’s gonna fuck up anyway. It’s that whole concept of not giving up on somebody, to see somebody for more of what they see of themselves. It’s easy for people to think that Alfred is the one, because he’s in the street selling drugs and he’s caught a couple of charges, that he’s the one that’s going to be the no good one, but he’s the one with the talent. He’s the one with the heart. Also, like, Hotel Artemis, the brother, he’s doing it for us. He really is trying to work for the betterment of the two of them to get out of this place. I love that even when you don’t want to root for that person, you root for them. That is something that I’m always attracted to when I look at characters, like, ok, how easy is it for us to put up this blindfold, to not see this person for who they are and really embrace them. I will always be the person to choose those kind of characters because there’s just so much more to them and we all know one! I like to be a catalyst for change, rather than good or bad, because at the end of the day, most people don’t feel like they can change. Most people feel like they have to be just so… stuck in where they are and what I have been very fortunate with in all my characters is to really show a different side of how these people can surprise themselves.