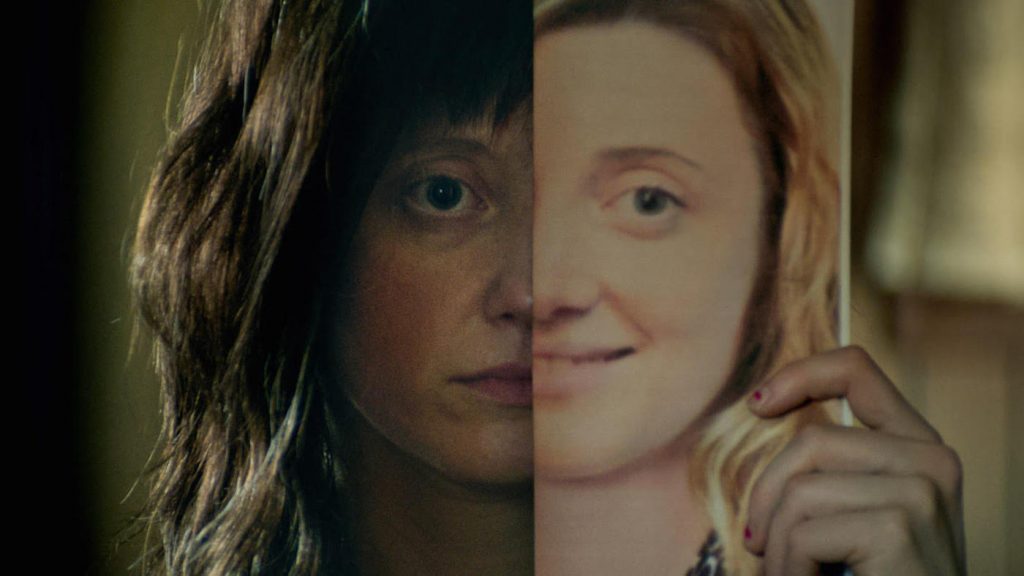 Andrea Riseborough on Bringing the Complex, Searching Nancy to Life

English Actress/Producer Andrea Riseborough might be the most successful performer you won’t recognize, and that’s exactly as she likes it. Highly in demand by both the UK and the US film industry, she is known for disappearing into her characters, and creating indelible performances that enhance every one of her projects. To see her in the terrifying Black Mirror episode “Crocodile” is to witness an actress at the very top of her game. She has now expanded her work as producer, and as such, helped the new indie feature Nancy come to fruition. Releasing on June 8th, and helmed by writer/director Christina Choe, the drama centers on character Nancy Freeman (Riseborough) who, driven by a craving for connection, finds herself increasingly convinced she is the long-missing daughter of a couple (played by Steve Buscemi and J. Smith-Cameron) that she sees on television. This tense, character-driven film examines truth, willful belief, and what it means to be righteous. We spoke to Riseborough about playing such a multidimensional role, and why having well-constructed, believable female characters like Nancy is so important.

Nancy, as both a character and story, is something we rarely see onscreen. Why do you think reflecting a wider expression of womanhood is so essential?

I can’t understand how people don’t make the connection that when women are misrepresented, underrepresented, or not represented at all onscreen, it impacts the way women are treated in day to day life. I don’t understand how some people don’t make that connection. The American film industry makes the most money in the world. Along with that has to be some kind of responsibility to accurately reflect the demographics. The fact that much of the world’s work is done by women, but far less of the world’s earnings are made by them, is testament to the fact that it’s all part of the same problem. The more we can get real female and transgender and non-binary characters, and intersectionality onscreen, the more we can understand each other. That a film like Nancy can get made and distributed, being able to see movies like that makes a huge difference, I think.

One of the things I loved about Nancy was the relationship between Nancy and Ellen, J.Smith-Cameron’s character. She truly accepted Nancy for who she was, in spite of everything. I loved that expression of love. We all have this love to give, that we are all looking to put it somewhere, and Ellen was willing to give it to Nancy.

Steve Buscemi’s performance as Leo is so nuanced. Watching him as a grieving father and protective husband, I can’t imagine anyone else in that role.

I know! It’s wonderful. The first time he read it, he texted me straight away saying he loved it and was going to do it. I started jumping around the house like a lunatic. Steve is, in so many ways, an everyman. He’s had so many lives in his short life, so many incarnations. He’s been a firefighter, and done so many things. He’s a really interesting guy. I was so excited because I knew he’d bring a gentleness and kindness. I know him in real life, and he’s often cast as a bad guy or gangster, but he has that kindness. He brings such a kindness and a caution to Leo. He’s so good in the movie.

Your character Nancy is a bit antiheroic, but sometimes very surprising, I think the audience can’t help but hope the best for her. The role has a lot of complexity. What truth and femininity mean to Nancy, how her understanding of them is reflected in her choices, is fascinating.

Like everyone, Nancy craves connection. Her tools to connect are really rusty. She goes about it in very human ways, that’s the really important part of making Nancy for me. It’s so unhealthy to present things in a one-dimensional way. So many women in films are either hyper-sexualized or de-sexualized and pure. We see portrayals of one of the two ends of the spectrum by the three or four female characters ever portrayed in movies. It’s such a narrow vision of what a woman can be, and its so unhealthy for young girls. They need to see women being sexual, and have that be a good thing; women who are flawed and making mistakes. We don’t grow and learn without having made them.  I’ve made far more mistakes than I’ve done anything right in my life, but I do feel like those have been the most valuable moments.

I always said to Christina that with the tools that she’s got and her life so far, Nancy’s doing a great job. She was raised by an abusive mother, she has this horribly enmeshed home situation she’s living in, as well as a peppering of abuse from her childhood. Christina and I had our own backstory about that for Nancy that’s not in the film, but let’s just say she really really wants to connect with people. We are living in a world were people do feel disenfranchised in their own hometown. Sometimes they’re stuck, sometimes they never want to leave. With the advent with the world wide web, it seems like we’re all connected in this one certain way and in one way we are, but the beautiful thing that Christina wrote in Nancy is you get to experience modern day loneliness, and it’s partially a love letter to middle America. I don’t think Christina would say this but that’s how I’ve always seen it. Not just middle America but anyone who isn’t living in a major city and doesn’t have access to culture and things to do. Most of us, basically. That’s also why it resonated with me. The movie is about our need to feel connected.