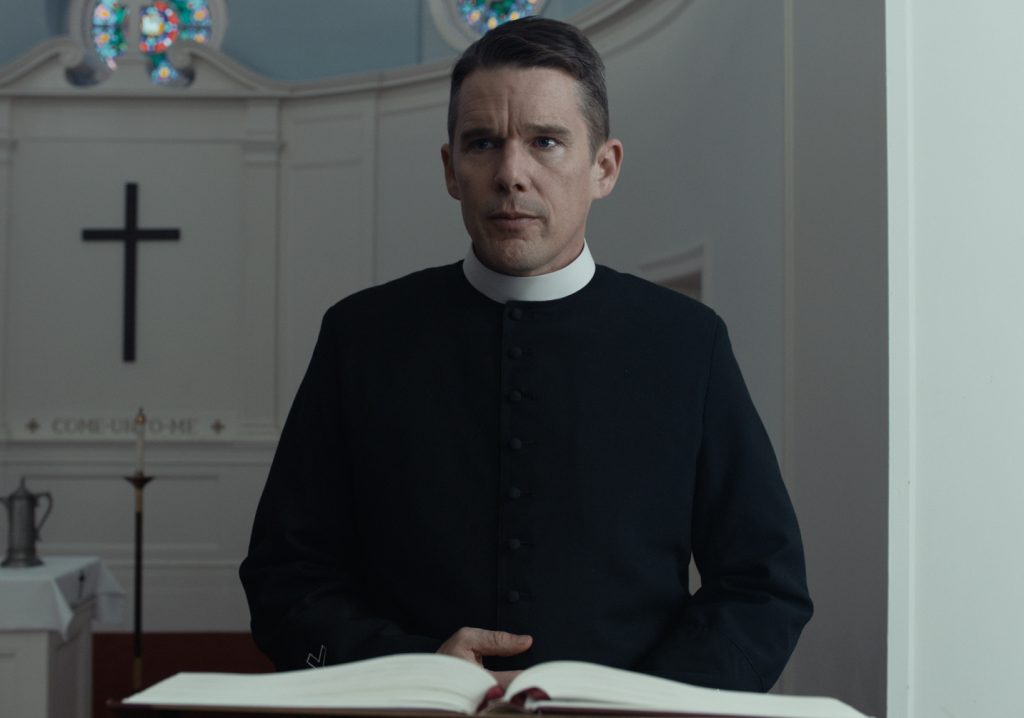 Writer/Director Paul Schrader on Seeing The Light in First Reformed

Perhaps best known for writing such Martin Scorsese films as Taxi Driver and The Last Temptation of Christ, Paul Schrader has also directed more than 20 movies. These include 1980’s American Gigolo, a commercial hit, although Schrader’s style and subject matters rarely attract a mainstream audience. His latest film, First Reformed, is a stark tale of personal despair and environmental crisis. Ethan Hawke plays Toller, a minister whose sense of loss only increases when he tries to counsel an eco-radical at the behest of the young man’s pregnant wife (Amanda Seyfried).

The austerity of the film, which opens wider on May 25, recalls the movies Schrader analyzed in his 1972 book, “Transcendental Style In Film: Ozu, Bresson, Dreyer”, just republished in a revised edition. While this contemplative mode underlies Schrader’s cinema, the director most often pursues stories with flamboyant sex or violence. For his interview with The Credits, which has been edited for length and clarity, Schrader sat in a different section of the same D.C. hotel restaurant where he had, 16 years earlier, answered questions about Autofocus. He was asked if he saw a link between Toller and that movie’s protagonist, sex-addicted TV actor Bob Crane.

“No, no. I do seem a kind of connection between Taxi Driver, Light Sleeper, The Walker and this film. Films about a solitary fellow who lives in a room and then goes out into the world and then comes back. I’ve revisited him over the years. It seems, now, about every 10 years or so. Maybe this is my last one. That’s the character who got me into film. In 1969, I was a critic for the L.A. Free Press. I went to see Bresson’s Pickpocket. Two things happened during that 75 minutes. One is I got this idea about the style and spirituality. That eventually became a book. And I got the notion — I wasn’t a filmmaker at that time — that I actually could make a film. Because I could make a film like this. Three years later, I wrote Taxi Driver, Which is that film. And now, 50 years after that book, it and Taxi Driver are entwined in this film.”

How different is it making films today than it was, not 50 years ago, but just at the time of Autofocus.

Anybody can make a film now. If you haven’t figured out how to make a film by the time you’re 12, you’re behind the curve. [chuckles]

The flip side of the fact that anybody can make a film is that virtually nobody can make money at this. So we have now taken our place with the rest of the arts — films, music, poetry, fiction, painting. What percentage of painters make a living? Now we are fully democratized and we can go broke.

And that’s because of the technology?

Yup. I shot this film in 20 days. When I began as a director, this was a 45-day film. Then it became a 40-day film, then a 30-day film, now it’s a 20-day film. You get more raw material in 20 days than you used to get in 45. And you’re never off the set. I stopped using my trailer because by the time you get there, somebody’s tapping you on the shoulder, saying, “we’re ready.” You realize how much time you used to waste, waiting for this and waiting for that.

You end up with more footage. Is it harder to edit?

Well, you actually do not have to turn off the camera. Some directors keep rolling in between takes, so they have all this stuff. If you’re shooting loosey-goosey, two, three, four cameras, you get a massive amount of film. Then you get whole gangs of editors. But in this case, I was editing very strictly in my mind.

You’ve said that First Reformed was inspired by Ida, the 2013 film about a Polish nun, and a conversation with its director, Pawel Pawlikowski.

Which of the film’s many themes arrived first?

It’s just the arc of the soul, and what Kierkegaard called the sickness unto death. I just started with that guy. And took it from there.

There are a lot of references to other films in this film. Richard Linklater told Ethan, “Nobody’s even tried to make this film in 60 years.” One of the odd things about this moment I find myself in is, I simply made an old movie. And yet it feels very much of this moment.

You shot in the classic 1.33:1 Academy ratio. I understand that you also wanted to do black and white.

That was just because of Ida. That was Academy black-and-white, so I said, “I’ll make a film like that.” But then I had delivery requirement of color, so I made it in a very restricted palette.

Amanda Seyfried was pregnant while making the film. Did you go looking for a pregnant actress?

The producer gave me a list of 10 actresses who would meet their requirements. I asked about Amanda, and was told she’d been turning down a lot of roles lately. She was turning them down because she was pregnant. She loved the script, and she thought it would kind of cool to play a pregnant character while she was pregnant.

That helped me out financially, because it gave me a hard and fast date. When I had trouble with the cash flow, I could say to the financiers, “I’ve got her obstetrician’s phone number. You can give him a call, but I don’t think he’s going to negotiate with you.” Then I had to shoot her out in the first six days.

One of the things that’s often mentioned about you is that you grew up in a Calvinist church and you weren’t allowed to go to movies.

To understand that you have to understand the ’20s. In 1926, the Christian Reformed Church issued an edict against worldly amusements. This was right in the roaring ’20s, when movies were very risque. It was because my church did things like this that Hollywood had to set up its own censoring unit. The Code. So that churches would stop telling their parishioners not to go to the movies. Once that edict was in, it took a long time to overturn it. Eventually, television knocked it out. Couldn’t keep television out of the houses. Now my alma mater, Calvin College, has a film department.

Did your childhood experience of that church influence how you depicted the church in this film?

Well, I came from a devotional church. Kind of spare, ascetic, contemplative. They look like courtrooms. Four white walls and a crucifix. As opposed to the new style megachurch, the entertainment-driven church. I didn’t shoot services in the megachurch. But they’re sing-and-dance churches. Thousands of people making the same gesture, like at a football game.

Why did you bring a megachurch into this story?

Toller has this church that can’t support itself. So it needs the state or private business, or maybe private business in connection with a larger church. And, in Bresson’s Diary of a Country Priest, the young priest has a relationship with an older priest who helps him. So I was looking for another member of the clergy I could use to have dialectical discussions. I realized a megachurch guy would be the right guy.

Watching First Reformed, I quickly began to think of “Transcendental Style in Film.” What’s new in the revised edition?

I thought the transcendental style was a kind of adjunct to cinema. Thanks to Gilles Deleuze, the French philosopher, I realized that it’s part and parcel of the postwar movement toward what Deleuze called “time image.” Durational image as opposed to movement image. At one point, movies started slowing down. Antonioni, Rossellini, De Sica, and Bresson. I realized that this style came out of neorealism. I hadn’t realized that before.

I also realized that, as film goes to what we call slow cinema, it moves in one of three directions. Toward worship. Toward the surveillance camera, which is unending documentation. Or toward the art gallery, which is installation. As directors, like errant electrons, flee narrative, at some point they pass through the Tarkovsky ring. That’s when they move from commercial cinema to museum cinema.

The Tarkovsky ring sounds like something from the next Avengers movie.

[laughs] If you want to get your money back, don’t ever go through it.