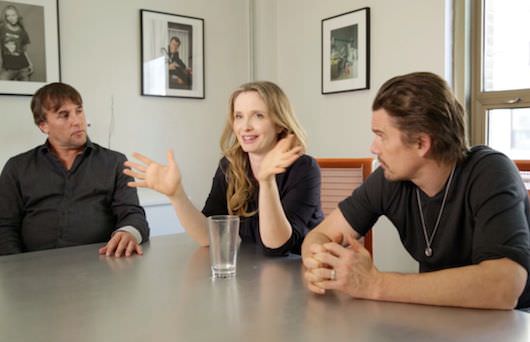 Richard Linklater, Julie Delpy & Ethan Hawke on Their Before Trilogy

Eighteen years ago, Richard Linklater’s Before Sunrise was released in late January of 1995. Save for a few bit speaking roles sprinkled throughout the film—a pair of Austrian theater actors, a palm reader— every minute of screen time, and every word uttered, comes from a young American, Jesse (Ethan Hawke) and a young French woman, Céline (Julie Delpy), who meet on a train and impulsively decide to spend the next 24 hours together in Vienna.  In the span of 101 minutes, Jesse and Céline walk and talk, sit and talk, lie down and talk—all while aware that once the sun rises, Jesse’s due at the airport to catch his flight home.

Their chemistry is palpable, their energy overflowing—here are two hyper literate twenty-somethings falling in love in front of your eyes, and you believe them. Hawke and Delpy, working closely with Linklater (they work shopped Linklater and Kim Krizan's script from their very first audition), create an incredibly realistic portrait of a young romance—their enthusiasm greater than their wisdom. As one does at that age, they fill any potential pocket of silence with words while the true language between them, the way Jesse covers his smile with his hand when she says something particularly charming, the way Céline watches his hands swinging as they walk and he talks, is unspoken. Their performances ring true. Their night together, loosely plotted at best, has an organic momentum that carries you with them throughout Vienna, finally back to the very train station they had giddily departed the day before. They make a final promise to one another—they will meet back at that station six months later. The film ends. We’re left hoping they follow through with their plan.

“It’s not like anybody was begging us to make a sequel,” Hawke says as we begin our interview. But of course they made their sequel anyway. After various false starts, several versions of the script, and thoughts to expand the scope—more locations, bigger budget, increased cast—the sequel was eventually scaled back and took a similar shape to the original. Only nine years had passed, and Linklater, having had such a rewarding experience working with his actors before to help build out and improve the script, wrote this script with them. Before Sunset opens with Jesse and Céline meeting in a book store in Paris, where he’s talking about his novel. The novel is about, of course, the night he spent with Céline nine years before. Their reunion in the book store is underplayed, subtle, charming. They’re happy to see each other, Jesse visibly so, Céline playing it cool—they walk off into Paris to find a café and catch up. But before they leave, Jesse’s minder tells him he’s due at the airport in just a few hours. These two and their ticking clocks, always racing against time.

Before Sunset is a deeper and more daring film than the first, as it should be considering Jesse and Céline aren't kids anymore. There’s something magical about the fact that the amount of time between the two films is the same amount of time that has passed since our characters last saw each other. They begin as they had nine years ago, bubbly conversation, smiles, mutual attraction, excitement. But there's something slightly desperate happening beneath their words. The masks they wear to start the film slowly slip as they begin to reveal themselves. Jesse and Céline have major problems, namely that they’ve never gotten over each other. It is nearly halfway through the film before Céline finally inquires about Jesse's wife—he's been wearing a wedding ring the entire time—and what follows that question is the most thrilling moment in the series thus far. Both Jesse and Céline cop to the fact that they're miserable without each other. They go to her apartment. Jesse's car waits for him outside—he needs to leave for the airport immediately. Before Sunset ends on such a pitch-perfect note that the final film in the trilogy, even though it would take another nine years to be made, felt like it was promised by their incredible final exchange.

Before Midnight was released this past June to wide critical acclaim. Sharing screenplay credit again with his actors, Linklater has pulled off something astonishing—a trilogy about a single relationship and covered in real time over 18-years. Before Midnight confirms what we suspected at the end of Before Sunset, but it quickly plunges us, without any clunky exposition, into the lives Jesse and Céline are living after having spent the last nine years together.

We’re now in Greece, where they’ve spent the summer. In the opening act of the film, Jesse and Céline get into an argument in a beautifully orchestrated single-shot scene as they drive from the airport (where Jesse’s dropped off his son from his first marriage after spending the summer with him) back to the large estate where they’re staying. Céline claims that Jesse’s mere mention of spending more time with his son (which means moving their family, which includes two daughters, to Chicago) is a time bomb. This fight, this scene, is a microcosm of the entire film. 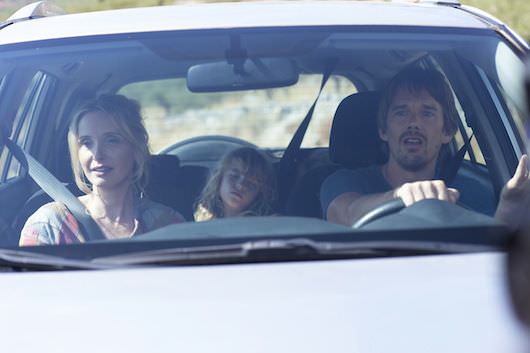 In a departure from its predecessors, Midnight includes, for a brief period in the first act, an ensemble. Jesse and Céline have dinner with the new friends they’ve made during the summer, including the owner of the house they’re staying at. The scene is made up of different generations of couples—young lovers, our middle-aged protagonists, an older couple, and finally the host and his friend’s widow, both in their 70s. Their conversation includes frank appraisals of how the relationships represented around the table have been sustained—it seems very much like a refutation of everything Jesse and Céline represented in the first two films, the power and beauty of true romantic love. To look at them now, grimacing through this dinner, you see that perhaps their compatriots are right. Soon we’re on another long walk with them, and they’re talking, and things seem hopeful. A fight later that night in a hotel room, the explosion of the “time bomb” that Céline had accurately predicted would go off in that scene in the car, takes our couple, and the viewer, into the very abyss of romantic love’s end. Or so it seems for several excruciating minutes.

The end of this wondrous trilogy is up for interpretation. The fact it exists at all is no small feat. We spoke to Linklater, Delpy and Hawke about their incredible creation. 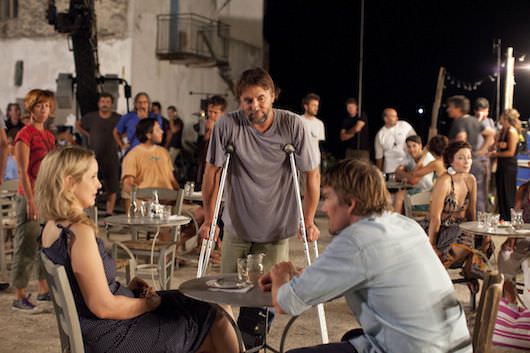