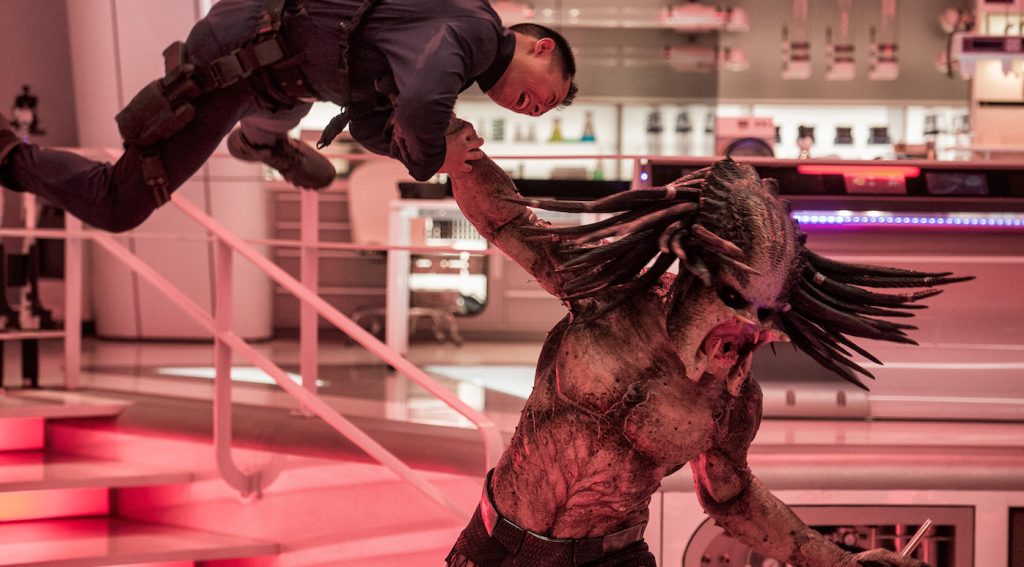 The Predator Unmasked is Delightfully Repulsive in New Image

Yesterday we got our first look at the first Predator in action. The teaser featured a Predator that was ruthless and unyielding in its attack. We cheered to see the alien species make its way back to the screen. They were looking well armored and particularly sinister. If you thought that was frightening, however, wait until you see what was under their head gear. Today we get to see the Predators unmasked. Or, at least one of them.

20th Century Fox released the first still of the hostile alien species. Playing on our nostalgia, these are lean, mean versions of the guys that you remember. The picture caption reveals that the Predator is escaping from a ‘secret government compound.’ The scaly creature easily flings a government agent over its head. It’s certainly curtains for that guy.

Casey Bracket (Olivia Munn) explained in the teaser that the Predators are evolving on every planet they land on. We definitely see signs of evolution, but they also maintain the monstrous characteristics we love about them. The Predator still sports the dark, tentacled head appendages and oversized cranium. They maintained the long, sharp claws that you would definitely want to avoid shaking hands with. Best of all, they’re still rocking the fishnet stockings and we wouldn’t have it any other way.

Take a close look at that face, if you can stand it. Their eyes seem to have gotten larger, darker, and sharper. They were already heat seeking missiles of doom, but now their sight might be stronger than ever. They also have larger mouths and fangs bringing that next level alien look.

Along with this definitive shot of the Predator, we get to see a badass looking Olivia Munn protecting young Rory (Jacob Tremblay). Lastly, there’s a shot of the men of the movie, apparently getting briefed on the threat. Some of them don’t look too worried yet, but they’re about to be.