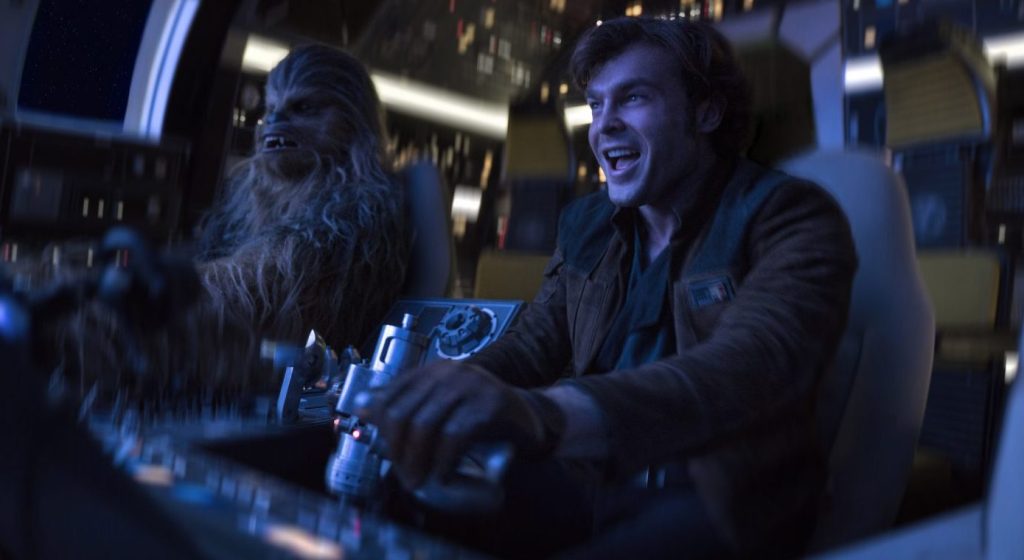 The Five Moments in Solo that Delighted Us the Most

Change is hard, but Alden Ehrenreich made it easy for us. Harrison Ford so endearingly created the prickly and grizzled antihero, Han Solo, that it was difficult to imagine anyone else in the role. Ford endorsed Ehrenreich’s performance in Solo, and it turns out he has pretty good judgment. Ehrenreich channeled Solo’s essence and the script played to his freshness in the role. Solo is the most adventurous and lowest stake film in the Star Wars franchise, which allowed us to just relax and enjoy. We know where Solo’s story is heading in the battle with the Empire, so we were surprised that things usually didn’t play out how we expected. Here are the top five things that most delighted us in Solo: A Star Wars Story. Warning: definite spoilers ahead.

I don’t know if I have ever been so emotional about losing characters I didn’t know. Beckett (Woody Harrelson), Val (Thandie Newton), and Rio (Jon Favreau), were everything that we love about good guy outlaws. They were a family that stuck together, cared for each other, sacrificed all that they could, and stole some really big stuff. Han clearly felt a connection to their camaraderie, which made us even more curious to discover how he becomes such a loner. Newton and Favreau kept details about their characters close to the chest and they did not disappoint. Rio, we hardly knew ye, but cried a ton over that emotional death that put Han at the flight controls. And can we get a spin-off of Val movies? That woman is a hero and I want a full biography.

Solo consistently pulled one more punch than we expected it to. From the moment we saw a lovestruck Han fawning over Qi’ra (Emilia Clarke), we knew this could only go two ways. Qi’ra was going to die or betray him. When we saw her later, clearly guarding secrets and bearing a Crimson Dawn brand, we knew the betrayal was looming. Of course, she did eventually kill Dryden (Paul Bettany), call Darth Maul (Sam Witwer), and fly off abandoning Han on Savareen. Before that, however, it was Beckett who first went behind Han’s back. He even told Han not to trust him, but we were too distracted by Qi’ra to listen. Possibly the most interesting part of Solo was seeing Han before he had been betrayed. He was shifty and quick on his feet, but hadn’t yet lost his capacity for human connection. Things can only get darker from here.

The muddy meeting between Han and Chewie (Joonas Suotamo) was really fun. It fit Han’s character well by allowing him to slip out of a tight spot with his charm and quick wit. It also filled in one of the biggest question marks we had been hoping to see play out. And was it just me, or did we get a carbonite reference when Han was sinking into the mud? Chewbacca later proves to be a much more capable first mate than Qi’ra, and the legendary team is born.

Lando and the Millenium Falcon

Donald Glover was the stand out of the film in a heavy field of great characters. He pushed the fashion, the attitude, and the legend of Lando to the extreme and gave us everything we were hoping to see. And that Sabaac game we had been speculating about for months – yah, Han lost it. He had to play backup pilot to Lando and L3 until a rematch at the end of the film. Also, every person in the theater yelled, “Go girl!” at least once during an L3 (Phoebe Waller-Bridge) scene. She had the best droid attitude since C-3PO and was a gem of a character.

Seeing Han’s backstory and getting a microscopic view at his life was a nostalgic thrill ride, but it wasn’t going to mean anything without a hook. Despite tangential references to Tatooine and the spice mines on Kessel, Solo didn’t have a hard tie to the later series until we reached Savareen. The plot stunned us again when the dreaded Enfys revealed themselves to be freedom fighters. Han pulled off his elaborate switcheroo plot and escaped the Crimson Dawn with the refined coaxium worth millions of credits. Rather than flying off with the goods to live the rest of his life in luxury, Han handed it all over save for a pocket size canister with a very important purpose. Ultimately, Han funded the early rebellion and we cannot handle it. We knew we loved you for a reason, Han.