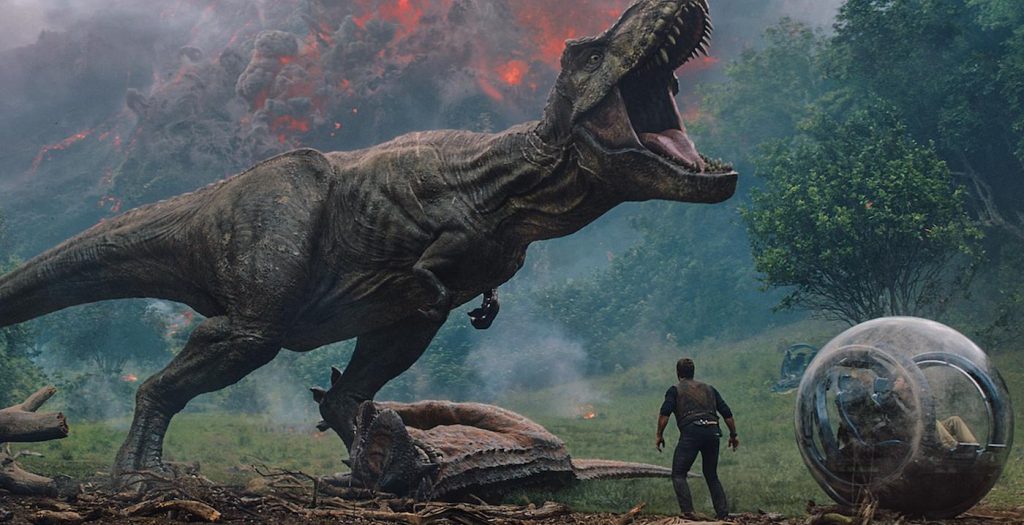 While Claire Dearing (Bryce Dallas Howard) wants you to adopt a dinosaur, you’re smarter than that. You know that the humans who have populated the Jurassic franchise have consistently underestimated their own intelligence and ability to “control” life. Dinosaurs cannot be adopted (even symbolically) because they are not ours to have, to own, or to manipulate. You’ve seen this proven time and time again throughout the franchise, and now, a new featurette boasts that J.A. Bayona’s Jurassic World: Fallen Kingdom has the most dinosaurs in franchise history, which will give humans just that many more ways to be eaten by their own hubris (figuratively—they’ll actually be eaten by dinosaurs).

“There are scenes where we had so many dinosaurs in the same frame, we had to make the frame bigger,” says Bayona in the featurette. Producer Pat Crowley makes the point even clearer, saying that Fallen Kingdom has more dinosaurs than every previous film in the franchise combined. Fan favorites are of course back (the T-Rex and the velociraptor, the deadly Mickey and Minnie Mouse of the Jurassic franchise), including Jurassic World‘s most impressive newcomer, the mosasaurus, the massive, aquatic apex predator. There are also a bunch of brand new dinosaurs here, like the ankylosaurus, a peaceful herbivore with an impressively spiked, shelled back, the fish-eating, heavily fanged baryonyx and the carnotaurus, a horned, fanged ferocious carnivore. There’s also Stiggy (a stygimoloch), an adorable herbivore who sounds like he’s going to be a new favorite. Then, there are the new genetically modified dinosaurs like the indoraptor, which Chris Pratt calls “a psychopathic, murderous beast.” Oddly enough, the indoraptor isn’t one of the potential adoptee options.

This new featurette isn’t just about pure boasting: it also shows the incredibly impressive animatronic work that went into creating a lot of the dinosaurs you’ll see on screen. The Jurassic franchise has long relied on both cutting edge digital technology and the tactile craftsmanship of the creature effects team, led by the legendary Neal Scanlan. Giving Pratt, Howard and the rest of the cast actual creatures to interact with is one of the things that has long made the franchise so mesmerizing. A film like Fallen Kingdom requires a medley of mediums—including motion-capture technology, animatronics, VFX, SFX and more. And now with Fallen Kingdom, all of this has been brought to bear to create the most dino-packed film in the franchise’s history.

It’s been four years since theme park and luxury resort Jurassic World was destroyed by dinosaurs out of containment. Isla Nublar now sits abandoned by humans while the surviving dinosaurs fend for themselves in the jungles.

When the island’s dormant volcano begins roaring to life, Owen (Chris Pratt) and Claire (Bryce Dallas Howard) mount a campaign to rescue the remaining dinosaurs from this extinction-level event. Owen is driven to find Blue, his lead raptor who’s still missing in the wild, and Claire has grown a respect for these creatures she now makes her mission. Arriving on the unstable island as lava begins raining down, their expedition uncovers a conspiracy that could return our entire planet to a perilous order not seen since prehistoric times.

With all of the wonder, adventure and thrills synonymous with one of the most popular and successful series in cinema history, this all-new motion-picture event sees the return of favorite characters and dinosaurs—along with new breeds more awe-inspiring and terrifying than ever before. Welcome to Jurassic World: Fallen Kingdom.