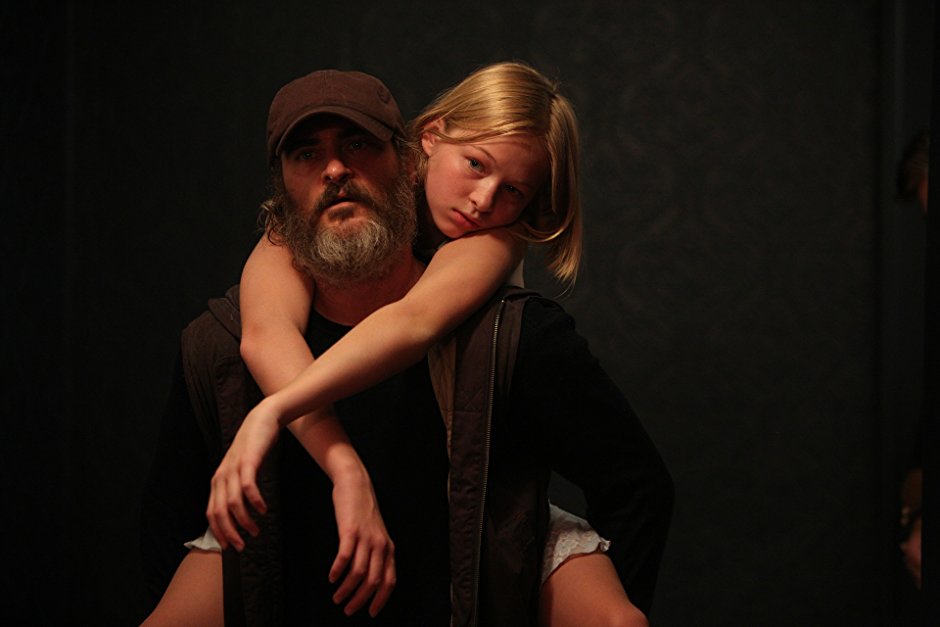 The thing about You Were Never Really Here is that it is already a tremendous success. Its screening at the Cannes film festival midway through last year received a standing ovation, and won the awards for best actor – the formidable Joaquin Phoenix – and best screenplay – written by director Lynne Ramsay – among other accolades. And it wasn’t even finished; the film was only about halfway through the editing process. Indeed, the film has been gathering devoted advocates as it has been released across Europe, ahead of the U.S. premiere this Friday. Not quite the kind of film to accumulate a “fan base,” this movie instead inspires a quiet but steadfast insistence from those that have seen it that everyone who has not should see it too.

But You Were Never Really Here is remarkable in ways that reach far beyond its success as a testament to good filmmaking. Take the two central themes that thread their way through the heart of the film: human trafficking and post-traumatic stress disorder. Either one of these topics pack enough of an emotional punch to make any storyteller balk. But the plot hangs suspended between both of these issues. In overview, a hitman named Joe (Joaquin Phoenix’s character) grapples with his post-war PTSD as he crusades to save a young girl, Nina (played by Ekaterina Samsonov) who has been swept up into sex trafficking.

The movie is far from easy subject matter, and it is hard to imagine a film that walks in the lengthy shadows of these topics and remains watchable for audiences. And yet You Were Never Really Here does just that. The trailer alone is chilling: in it, we see an ominous shot of a hammer, Joe’s weapon of choice, hanging on a hardware store shelf. We see it in action a few seconds later. But there is a beauty to be found within this brutality, largely by way of the glimpses we receive of the bond Joe forms with this girl he is working to save. Nina is the perfect physical opposite of Joe, small and fair where Joe is hulking and cast in shadow. Yet this throws into sharp relief how similar their struggles are – both are dealing with demons, some internal and some external, and taking them on in relative isolation.

Movies that shed light on such challenging material unequivocally have a place on our screens, despite the difficulties they inherently present. While these topics occupy plenty of space in the public consciousness, storytelling surrounding PTSD and sex trafficking is critical because it can afford us a closer, more empathetic look at the problems, humanizing them far beyond the statistics we often hear these tragedies reduced to. In crafting films like this, audiences see not only the moments where these issues play out as key plot-advancing events, but also the quieter in-between moments, the ones the average person might not even know exist. You Were Never Really Here succeeds in addressing these dark and difficult topics without reducing them to simple plot devices, or atmospheric hurdles.

It is vital to note not only the story, but who is telling it. Lynne Ramsey, an acclaimed director in her own right, is taking on material typically tackled by men, and in a manner unique to her. While some of the sequences may seem like classic action movie fare, look closer. Some of the worst violence isn’t actually on screen at all. There is blood spatter, or Joe’s hammer-swinging fist flies out of the shot. Yes, there are action sequences and violence and gore. Yet the film keeps its eye on the toll these things take on the people who experience them.

You Were Never Really Here is not a film about saviors. It is about humans, grappling with themselves as they try to save someone else. The movie is a thorough and well-articulated examination of some of the most uncomfortable – and under-addressed – topics society faces today. This film is many things, including well-crafted, and visceral, and though-provoking. But it is arguably more important for what it is not. It is not an easy movie to watch, nor is it tidy, or innocent. It is not just entertaining; it is important.