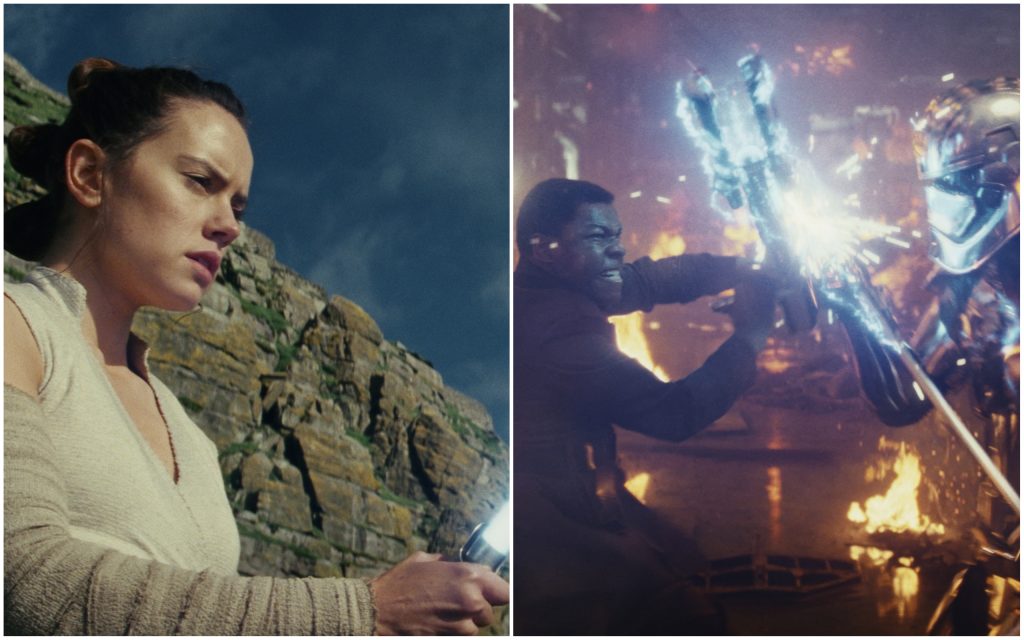 Rey & Finn to Stick Together in Star Wars: Episode IX

When Rey (Daisy Ridley) and Finn (John Boyega) met in J.J. Abrams’ Star Wars: The Force Awakens, the new era of Star Wars officially began. Finn watched in awe (as did we) when Rey beat up some goons, saved his life (several times in this initial sequence, in fact) and helped them both escape by jumping into an old piece of junk (ahem, the Millennium Falcon) and evade the First Order that was hot on Finn’s tail. It was a bracing way to introduce a new generation of Star Wars fans to brand new heroes, with a young lady in charge, no less, and it was made only more potent by the obvious chemistry between Ridley and Boyega. Their budding relationship, which was very near to a romance by the film’s end, was one of the joys of The Force Awakens, and had major implications for the films to come.

Then in Rian Johnson’s The Last Jedi, the two were separated for the entire film. Rey spent most of the film on Ahch-To, trying to woo a reluctant Luke Skywalker back into the fold to help the Resistance fight the First Order. Finn spent most of his time with his new buddy Rose (a great Kelly Marie Tran, and a potential romantic interest, mucking up the deal between him and Rey) off on their own adventure, trying to track down a codebreaker. Rey and Finn finally reunited at the very end, and while their reunion was sweet, it was brief, and punctuated mostly by Finn’s concern over an injured Rose. What happened to Rey and Finn’s budding romance? What happened to the dynamic relationship that had pushed them both to become the heroes that galaxy needed?

It sounds like we’ll get an answer to that question, as the two star-crossed heroes will be reunited in J.J. Abrams upcoming Star Wars: Episode IX. We can hear a legion of Star Wars fans sighing in relief. Boyega confirmed as much as Awesome Con, the annual event in Washington D.C. where he was a guest. He got a hot tip from a certain someone with pretty good insider information on what’s to come…

“I haven’t read the script for Episode 9. But Daisy did shoot me a text saying, ‘Oh my gosh, I just heard from J.J. [Abrams], and we’re back together. That’s what I’m really excited about, is Finn and Rey back together again.’”

While Boyega hasn’t read the script yet (Abrams confirmed that it’s done), he does have hopes for what it might contain, like a little more background on Finn’s life before he took off the white helmet:

“One question I’ve always had as an actor being involved in Star Wars is why Finn decided to defect in the first place. I still don’t understand. I would love to know more, to go into his life as a Stormtrooper.”

After the events in The Last Jedi put the Resistance in such dire straits, with Luke now likely a Force Ghost and the First Order in Kylo Ren’s control, it’s very unlikely we’ll be going back in time to investigate Finn’s earlier life. But, the fact that Abrams told Ridley that Rey and Finn will be back together for the film, we can at least look forward to seeing the galaxy’s newest heroes face the colossal task of taking on Kylo Ren and his staggeringly massive First Order army in the climatic battle to come. The end of this new trilogy, and likely the entire Skywalker saga, should come to a close with the plucky orphan and the rogue Stormtrooper belong facing the future, whatever it may hold, together.