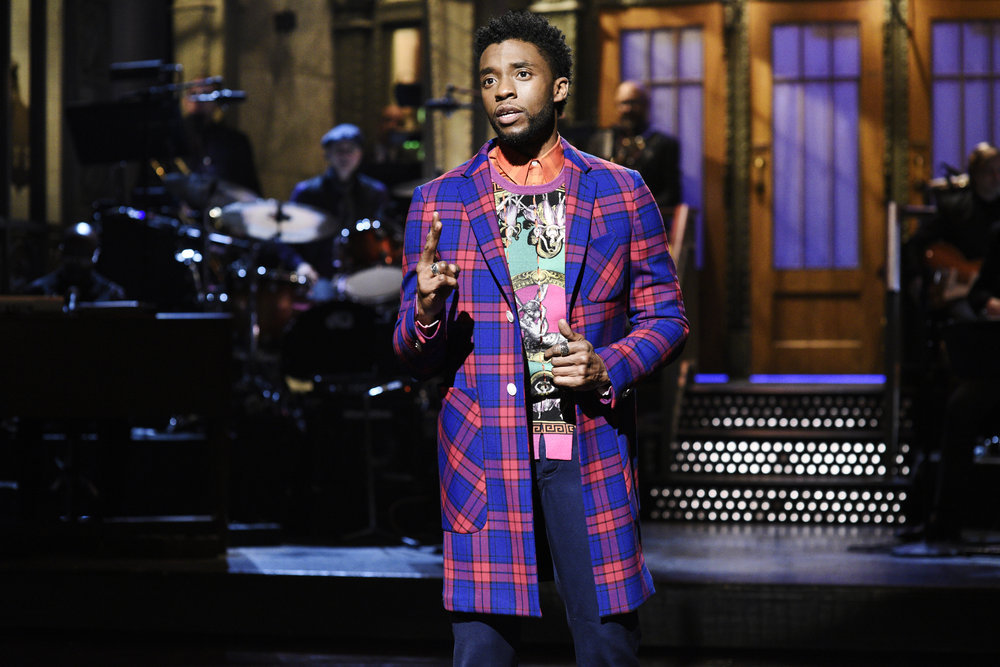 If you don’t want your crush on Chadwick Boseman to turn into a full-fledged obsession, it would be best to avoid his Saturday Night Live performance. The Avengers: Infinity War star looked impeccable in the opening monologue and nailed his jokes, which can be difficult for newbies. Boseman slipped in a savage dig at the White House, and got one of the biggest audience reactions of the season, and ended with some smooth moves inspired by his previous performance as James Brown in Get on Up.

Boseman joked that all the best Black Panther sketches had been done, which just goes to show what a cultural influence he has already become. He still got a chance at reprising T’Challa, however, in the ongoing sketch ‘Black Jeopardy.’ Tom Hanks had the best performance in this sketch to date playing a Trump voter who finds common ground with the other contestants back in 2016. Boseman one upped him, however, dropping his Wakandan wisdom on host Kenan Thompson.

Kate MacKinnon often runs the board among SNL performances, but this week’s standout was Aidy Bryant. Bryant is always game for wild ideas and fully commits. Mild mannered Aidy took a page from musical guest Cardi B’s book and started speaking her mind. She also perfectly channeled the real reason for yoga leggings, and it’s not running or hitting the gym.

Another fresh face to the SNL stage was Cardi B as musical guest. She’s had a meteoric year with her first single topping the Billboard charts and just releasing new album ‘Invasion of Privacy’. She showed no signs of nerves or being unseasoned, however. The rapper looked stunning and delivered her lyrics with confidence and style.

Featured Image: Host Chadwick Boseman during the Opening Monologue in Studio 8H on Saturday, April 7, 2018 — (Photo by: Will Heath/NBC)