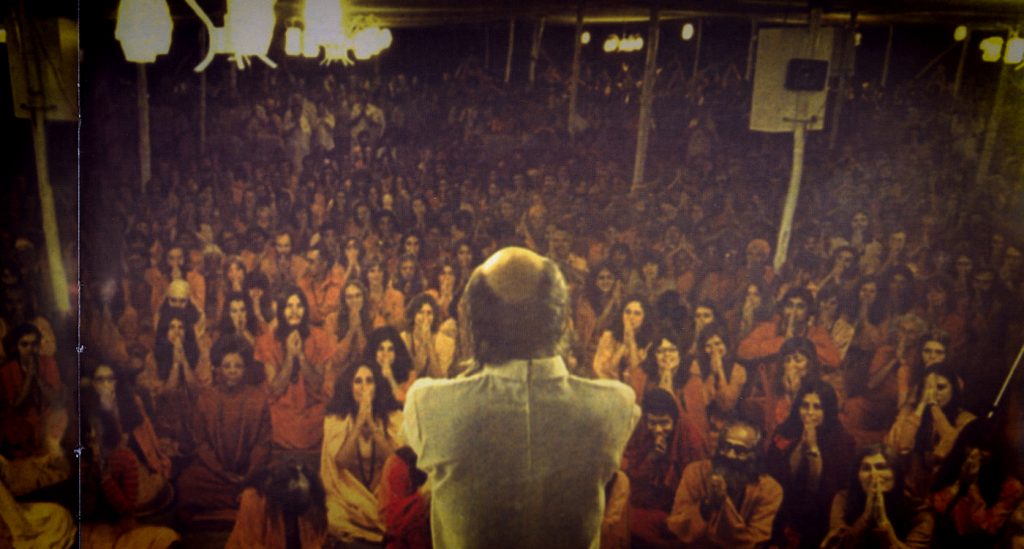 You would be forgiven for having difficulty placing the term ‘Rajneeshpuram.’ The violent clash between the followers of Indian guru Bhagwan Shree Rajneesh and the residents of Antelope Oregon in the mid-1980s seems like the makings of a famous event, but it has somehow faded from cultural memory. Directors Chapman and Maclain Way admitted the incident did not ring a bell to them either when they began their research for breakout Netflix documentary Wild Wild Country.

“I was born in 1986 and Mac was born in 1990 and neither of us had heard of this story either,” Chapman told us. “What we found was that, in the state of Oregon, it’s one of the most well-known stories, but as soon as you travel outside Oregon, it’s really been this forgotten, American, epic story that happened.”

The story, as told in the documentary, began small as a feud between neighbors. However, it quickly grew into a much larger conflict with serious consequences.

“Basically what ends up happening is [the Rajneeshees] end up busing in over 5,000 homeless people to live on the ranch and vote for their own Rajneeshpurum candidate, which really creates a huge mess in the state of Oregon,” Chapman explained. “They ended up poisoning the entire local town of The Dalles. Over 750 people were poisoned with salmonella in an effort to prevent them from voting on Election Day so that they could win the county election. That’s what the story is most remembered for.”

An archivist the brothers had worked with on their previous documentary pointed them to the topic. They poured through more than 300 hours of footage of the events that had been preserved by the Oregon Historical Society. Combing through the tapes required four people, including Producer Julie Lembi and editor Neil Meiklejohn, and lasted for months. As they dug deeper into the research, they begin to realize how the story had faded into obscurity.

“At the time in 1981, all the big news stations would usually re-record over their tapes they used so nothing got archived,” Chapman explained. “There were a handful of cameramen who were filming this footage that recognized that at the time that this was an incredible story and that these tapes really should be preserved. It’s really rare to see a story take place in the early 80s with this amount of archive footage attached to it. It really gives the audience an immersive look into the commune and into the era and America at that time.”

As the Ways began peeling back the layers of the story, they found two diametrically opposed ideologies coming into conflict with one another – the ingredients to a shocking and satisfying documentary. More than 30 years later, nearly all of those characters maintained their perspective. They key to the documentary became convincing them to share their story.

“I think the most challenging part was getting people on board to talk about the story,” Chapman recalled. “I think both sides were very afraid of being vilified or boxed in or cornered in as these one dimensional characters and I think really spending time with people and making it clear that we were going to give them a platform to explain their truths.”

Wild Wild Country depicts a time Chapman described as ‘religious cult paranoia coming off of Jonestown.’ The filmmakers endeavored to address the Establishment Clause and freedom of religion through the story. What draws the viewer in as a cult film becomes a broader exploration of cultural misunderstanding and the aggression that results.

“I think what we were able to do a little bit differently is we’ve seen a lot of cult movies and stories too and documentaries which is a little bit more focused on, ‘Why do people join cults?’ or ‘How do people fall into this?’” Chapman said. “We weren’t necessarily interested in exploring the brainwash elements, because when we met with these people, none of these people though they were brainwashed. They were all very successful, very intelligent.”

“I think the next big question for us was what their intent was,” Maclain said. “I think they had really interesting, fascinating answers about their ambitions and what they thought they were doing. Not just that there’s one overbearing leader that people are falling into this trap. But more, what’s the plan here? What’s the dream?”

The Ways found that several people were, in fact, willing to answer those questions. Fourteen subjects from either side of the conflict participated in the documentary. Netflix has become a platform for deeper exploration of stories that seem cut and dried, but spark greater debate. Wild Wild Country began trending on Twitter following its debut as viewers discussed the various perspectives that hadn’t been represented in mainstream media at the time.

“You’re talking to people who would all identify themselves as heroes in the story but a lot of them are very untrustworthy in their own ways,” Maclain said. “But that doesn’t take away from the validity of a lot of the arguments that they’re making. A lot of them make really powerful, strong arguments that are convincing in each other their own way and then you listen to another that’s totally different. It’s up to you to figure out how you feel about it.”

The central figure of the story and film is Ma Anand Sheela. Secretary to Rajneesh and leader of the bioterror attack, Sheela became the most controversial figure in Rajnesshpuram. Wild Wild Country opens wit a nearly folkloric account of Sheela’s role in the community. When she herself is finally introduced, it feels as if a guest celebrity has arrived despite having only minutes before learned of her existence.

“As soon as we reached out to Sheela, she was really thoughtful, really intelligent, really powerful, strong female voice, type of character,” Chapman said. “Within 5 minutes of talking to her we realized that she never really feels like she’s been given a platform to explain her version of events and what happened.”

The six-hour series explores everything that happened from both perspectives, but what it does not do is prescribe a verdict. That is for the viewer to decide.