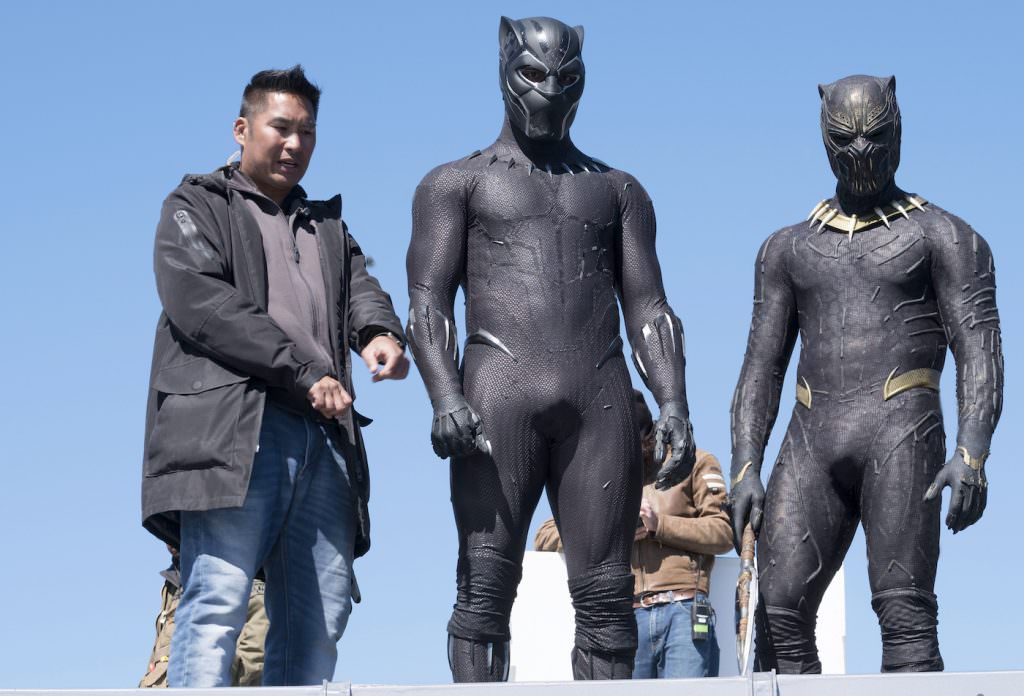 Given his pedigree as the guy who helped stage fights for two of the century’s most audacious action epics John Wick and The Bourne Ultimatum, stunt choreographer Jonathan Eusebio arrived on the Black Panther set in Atlanta, Georgia well qualified for the gig. Still, he faced a considerable challenge. In the space of just six weeks, Eusebui had to unite the actresses portraying Wakanda’s all-female Dora Milaje militia into a precision-tooled fighting machine.

Based in a gymnasium-like “stunt lab,” Eusebio applied lessons learned in 2006 from working on Zack Snyder’s hyper-violent ancient warfare picture 300. “We grouped the Spartans in small units to fight thousands of enemy soldiers,” he says. “My thought process for Black Panther was that the Dora Milaje are basically the female version of the Spartans, but instead of sword and shield they use spears. Their teamwork got to the point where the Dora become almost like an amoeba: When something comes in, the amoeba goes around the outsider and converges on it.”

Eusebio also drew inspiration from 1985 Jackie Chan movie Armor of God, which made a lasting impression on him as a southern Californian 12-year old besotted with comic books and martial arts flicks. Eusebio recalls, “At the end of that movie, Jackie fights four Amazon women and these girls are relentless. That type of pacing and rhythm kind of got imprinted in me, so that’s what I like.”

Building on those cinematic touchstones, Eusebio teamed with co-choreographer Andy Gill to develop a Wakanda-specific fight style from influences including Nigerian mixed martial arts boxing equivalent gambe and Angola’s version of Brazilian capoeira. For the Dora Milajae’s spear-brandishing attacks led by Danai Gurira’s fierce Okoye, Eusebio incorporated Zulu tribal traditions that bear resemblance to a Filipino weapons-based sport known as eskrima. “We drew upon all those things and put it in this cinematized movie format, but at the end of the day, a punch is a punch, a kick’s a kick, a throw’s a throw,” Eusebio says. “It’s the rituals that come before the battle that really make the difference.” Consulting on movement and chants with South African playwright/actor John Kani (T’Challa’s father T’Chaka), Eusebio says, “We made sure the fights connected in an authentic way with the ceremonial pageantry.”

The Black Panther boot camp sessions also got an energy boost from star Chadwick Boseman, who brought his own drummer to the training sessions. “He played the drums while we practiced the choreography, which was really cool,” Eusebio recalls. “When the drummer went fast, the movement heated up and when the beat slowed down, so did the movement. It became this collaborative environment where everybody wanted to put their stamp on the training process.”

On screen, thunderous percussion, arranged by composer Ludwig Goransson, set the stage for the initial smackdown between Chadwick’s T’Challa and Michael B. Jordan as the rival Killmonger. The sequence was shot on an exterior set surrounded by green screens later populated with CGI waterfalls, but the fight itself was emphatically analog. Director Ryan Coogler wouldn’t have it any other way, Eusebio explains. “Ryan’s whole thing is he likes to do long takes because the fights need to feel raw and real. That means Chadwick and Michael were really going at it, thirteen hours a day, in cold water, shivering. The surface eventually got slippery so they’re slipping and sliding, they’ve got weapons in their hands – – there was a lot of stuff involved. but Chadwick and Michael really fought their hearts out.”

After two decades in the movie action business, Eusebio has shaped plenty of Hollywood sequences to spectacular effect, but he singles out Black Panther as a rare project. “I think what sets Black Panther apart is that it not only deals with [African-American] cultural empowerment, the movie also shows women being empowered,” Eusebio says. “I mean, there’s so many layers, so we just tried to give the fight scenes a dynamism to propel everything along. When a story’s this strong, you want to make sure the action works.”