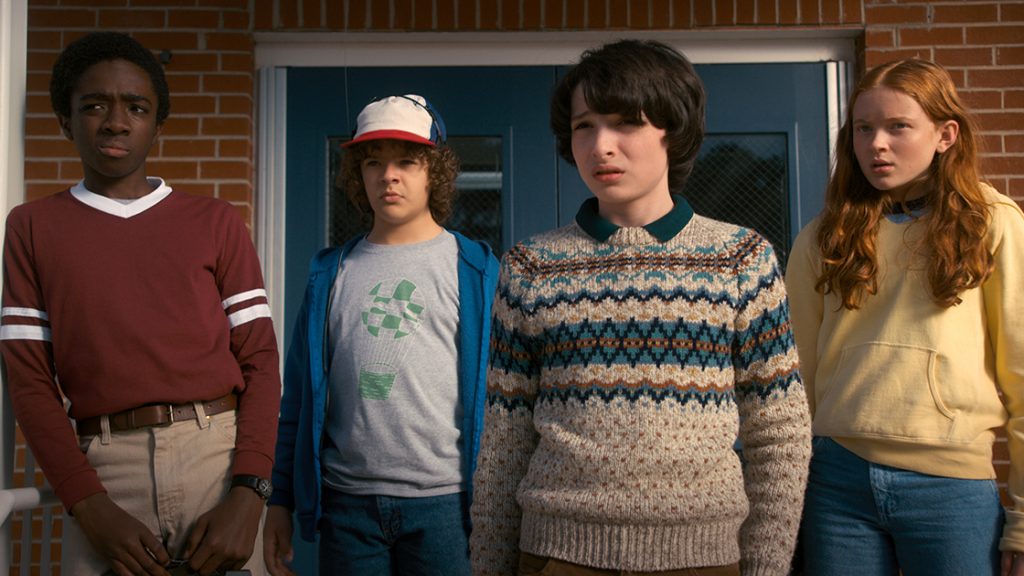 Details about Stranger Things season 3 have been slowly dripping out of the Upside Down. We already know the total episode count, some new characters on the way (including casting Maya Thuman-Hawke) and more prominent story arcs for returning cast members. But now we are finally getting more details about what our team of heroes may face in the coming season.

Season three will see further development of the two couples that formed at the end of season two. Lucas (Caleb McLaughlin) and Hawkins newcomer, Max (Sadie Sink) shared a tender moment at the Winter Ball. But the spotlight was on Mike (Finn Wolfhard) and Eleven (Millie Bobbie Brown). Shippers everywhere celebrated when the two tweens shared a sweet kiss at the end of season two—we’d only been waiting like 200 years for this moment. According to Levy, we’ll be seeing these two couples in season three, “Mike and Eleven and are going strong, so that’s a relationship that continues, and same with Mad Max and Lucas.” He said. “But again, they’re like 13- or 14-year-old kids, so what does romance mean at that stage of life? It can never be simple and stable relationships and there’s fun to that instability,” The course of love never did run smooth, especially not in High school. It looks like fans can look forward to some old-fashioned teen angst this upcoming season. As if dealing with demogorgans wasn’t hard enough.

One relationship that we did not expect to see but were glad we have was the relationship between Dustin (Gaten Matarazzo) and Steve Harrington (Joe Keery). The two accidentally developed a bond last season that has led to more than a few dad jokes about Steve. Fans can look forward to more of that relationship next season Levy confirmed, “We’ll definitely get to see some more of Steve Harrington in season three, and I’ll just say we won’t be abandoning the Dad Steve magic.” Because let’s face it, Steve Harrington is the dad our heroes need and deserve.

Another sweet relationship that we were introduced to was Eleven and Jim Hopper (David Harbour). Hopper looked after Eleven the entire season and at the end of season 2 arranged to adopt her, making her legally his daughter. If that isn’t enough to bring on the water works, there’s more. Harbour himself described his relationship with Brown and he began to see the actress as his daughter and that he discovered a new type of love he’d never experienced before. “A love that was human but pure, like you would take a bullet for someone,” he said. If this isn’t the sweetest thing you’ll hear all day then we don’t know what is.

Season three is shaping up to be an exciting time for both fans and the cast. There is no release date yet but production will begin this month. We look forward to seeing what awaits our heroes. They’ve fought monsters, how hard can high school be…right?