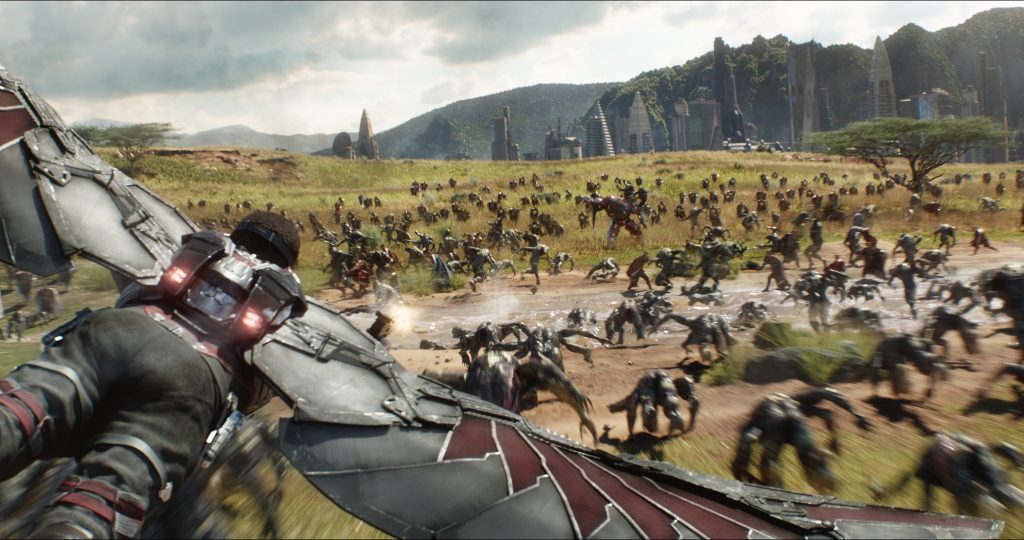 As Black Panther crosses the billion dollar mark, Marvel fans are turning their attention to the next mega installment in the MCU, Avengers: Infinity War. Infinity War is the first film in a two-part, game-changing battle with Thanos (Josh Brolin) that is bringing in not only the heroes from Wakanda, but just about every Marvel character since the MCU began with 2008’s Iron Man. We’ve been waiting (and waiting, and waiting) for fresh footage from Joe and Anthony Russo’s epic since we got this trailer during the Super Bowl, and finally, thanks to a recent episode of Entertainment Tonight, we have a brand new look behind-the-scenes of the film.

The footage  includes a look at the battle on Wakanda (the fictional African nation at the heart of Black Panther) before the scene was layered with effects. You’ll see extras dressed as Wakandan warriors, and a get a sense for what filming these epic battles is like on set, before Thanos and his evil forces (the Outriders), and all the other digital effects, are added to the scene in post production.

One of the best parts of Black Panther was Danai Gurira’s Dora Milaje leader Okoye. In the below clip, she talks about geeking out on the set. While this was Gurira’s first in an Avengers film, old hats like Anthony Mackie and Mark Ruffalo had different (and hilarious) takes on the filming process.

You’ll get a brief glimpse of Mackie, as the Falcon, in front of a green screen. We’ve seen him in action in the trailers, and know from the featured image that he’ll be heavily involved in the battle in Wakanda. “It’s like the first day of school when you come back,” he says about coming to the set of Infinity War. “And then by the end of the shoot, you want to kill everybody.”

Mackie’s not the only one in joking form; the Hulk himself, Mark Ruffalo, jokes about the size of the film limiting his screen time.

“No wonder I only have, like, four lines in the whole movie,” Ruffalo says with a laugh.

We’ve still got the final trailer to come, which will likely debut when the advanced ticket sales are made available. That should be very soon.

It’s very likely that Infinity War will follow Black Panther‘s world-beating haul at the box office, the latter of which becoming the fifth Marvel Studios movie to earn a billion dollars.

Check out the new footage below, and check back in with us as we detail every new bit of material before Avengers: Infinity War premieres in theaters on April 27th.